What's New
A FOCUS on Mission
Must Patience Be So Slow?
Harold Jantz: A Heart for the Mennonite Story
Lorlie Barkman: A Life of Creative Engagement
Last Days, First Days
Women in Ministry: Bertha Dyck
January Moment in Prayer “Holy Spirit—Fill Us!”
The Church as the Patient Body of Christ
Advent: Making Much of Jesus: Christmas Day
Advent: Making Much of Jesus: Fourth Advent
Home MB HeraldColumns Singing and dancing with a water can

“Why is that woman carrying a huge water can on her head?” I thought to myself. “Why are people putting chairs on their heads? Or Bibles? What’s going on?” Everyone was on their feet, dancing in a loose conga line through the church and singing loudly in harmony to the beat of a couple of drums.

I was in a Mennonite Brethren church in Saurimo in Eastern Angola, Africa, at the end of a weeklong trip in the Angolan countryside. I had been sick the day before, and had agreed to an injection of what turned out to be a drug banned in most countries, but I was pretty sure I was not seeing things.

Then the pastor helpfully explained. “They are singing a song about the exodus of Israel from Egypt. The things on their heads show how they carried all their goods out with them.”

How fun! What a memorable way to teach the Bible stories – completely relevant to kids and adults alike.

I thought of a few other encounters in Angola with the power of music. Two days before, some 200 people from the church met my fellow travellers and me at the edge of Cafunfo. We marched slowly for almost an hour to the church, while singing songs about the triumphal entry of Jesus into Jerusalem. We weren’t worthy of that comparison, but that’s what they did.

On my first visit to Angola in 2012, a brother in the Rocha Pinto church in Luanda led a choir, and sang lyrics he made up extemporaneously. My interpreter said, “They are welcoming us to Angola and their church!” Then the brother faced me, singing directly to (at) me! My interpreter said, “He’s singing, ‘Papa David will you take care of us?’”

Deuteronomy 6 teaches “bind the law on your hands and foreheads” as a way to remind Israel of the importance of the law. Here in Angola, we saw people reminding one another of specific truths and stories through song and dance.

Music written by and for the church is a powerful discipleship tool. 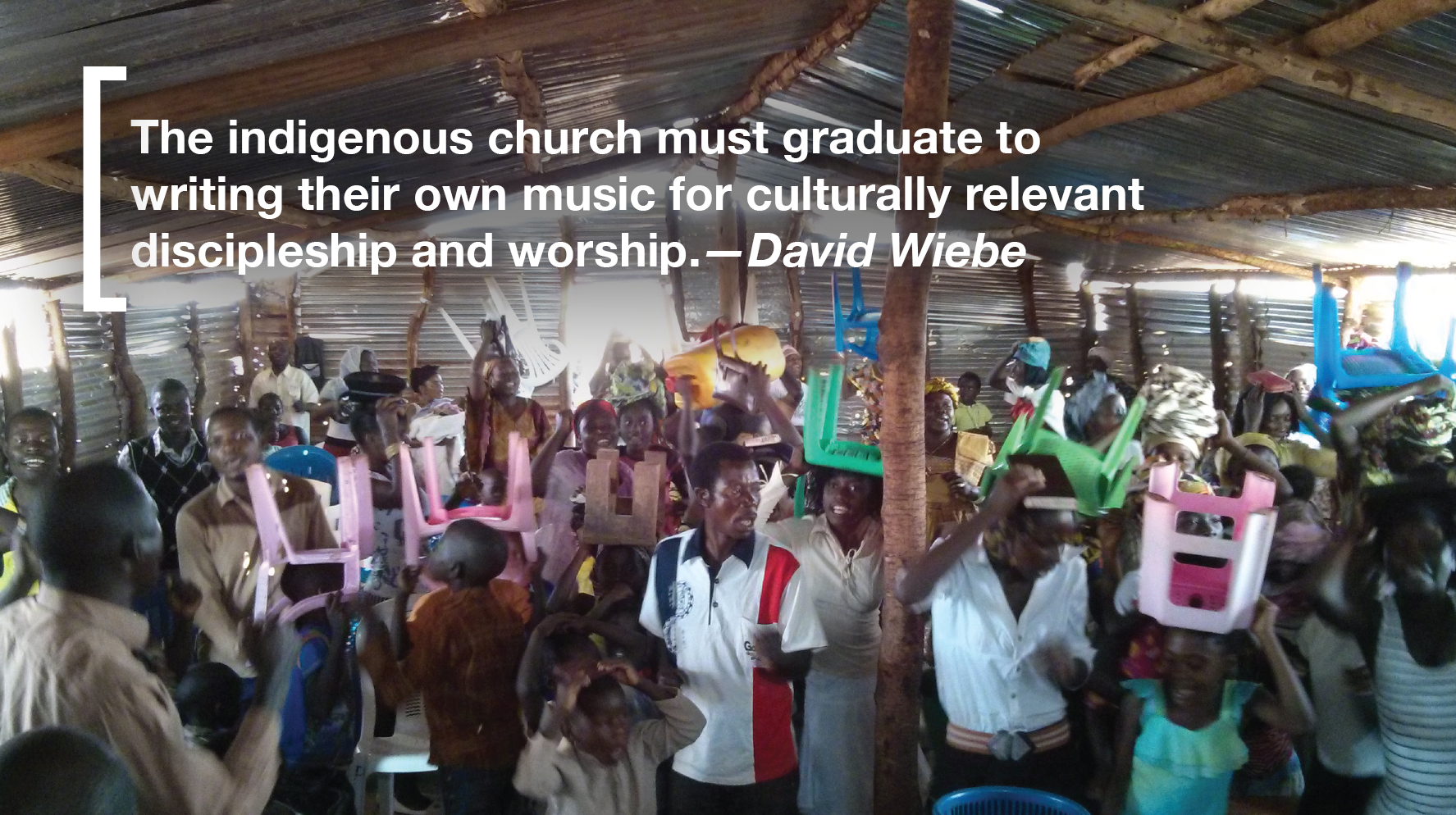 Last summer, as I drove home alone from Calgary to Winnipeg, I put on Dave Brubeck’s Christmas album. When he played “Joy to the World,” I sang along. The arrangement makes the tune dramatically slow, so I really entered into the words. God spoke to me in a very deep way about the fullness of the Incarnation in that moment.

I’ve sung “Joy to the World” a thousand times since childhood. The memorized words are a latent force in my mind that could be unlocked in a powerful moment.

My mom used to do household chores singing “The Love of God.” Her favourite verse has become my all-time favourite too! What powerful theology is written in a few short rhyming lines!

Could we with ink the ocean fill,
and were the skies of parchment made; Were every stalk on earth a quill,
and every man a scribe by trade;
To write the love of God above
would drain the ocean dry;
Nor could the scroll contain the whole, though stretched from sky to sky.
Oh, love of God, how rich and pure; how measureless and strong!
It shall forevermore endure –
the saints’ and angels’ song.

So much can be said through music.

In Africa, I see a pattern of singing biblical content. Sometimes I hear gospel hymns in Africa that were imported by North American missionaries, but less and less. The indigenous church must graduate to writing their own music for culturally relevant discipleship and witness. I’m glad our ICOMB members are mature and gifted enough to do that.

In Latin America, I hear lots of songs about the power of God in spiritual warfare. In North America, we most often sing emotional songs – expressing love and admiration to God – but we still sing theologically oriented songs like the one quoted above.

Will we “cross-pollinate”? Will we see people dancing in North American churches with chairs on their heads? Well, maybe in our African-immigrant churches! In the Sudanese church in Calgary where I worshipped earlier this year, there were glimpses of Africa. I do hope we recognize the potential of music to disciple us.

I hope worship coordinators know our Confession of Faith, and choose music consistent with that. Or, for that matter, use the liturgies written from the Confession. I believe that careful use of music will strengthen and unify our movement
– no matter what style we prefer.