What's New
Leading through the trauma of covid: Part two...
Ask God which town
Where to from here?
CCMBC National Director attends 2022 ICOMB Summit
MCC Canada and MCC Manitoba sell shared property...
The world appears to be growing darker
Sharing a new and unified language
6 reasons to attend the MWC Global Assembly...
One too many
Just one more
Home Arts & Culture Confronting Christianity: 12 Hard Questions for the World’s Largest Religion. 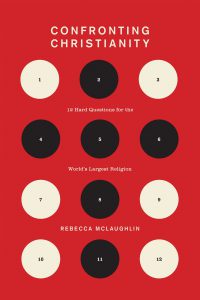 Crossway: Wheaton, IL.  2019. 238 pp.
Available through Alibris or Amazon for approximately $23 plus shipping and handling.

Chosen as book of the year by the editors of Christianity Today in its annual summary of books, in Confronting Christianity…, Rebecca McLaughlin takes on a formidable challenge. Though still relatively young, she has already been engaged in many settings in which she has had to defend belief in Christ and the Christian message. Taking on the questions that can be thrown at faith in a god of any kind, and ultimately in the God of the Bible and the one revealed in Jesus Christ, is the task of this apologetic project, and McLaughlin does it masterfully. Many of us who’ve grown up in the Christian faith, or who have done little to engage with the challenges to faith of any kind, may have little sense of what a good solid course in apologetics may offer. Here is a very helpful dose of it.

Apologetics, for those unfamiliar with the term, is the use of arguments and evidence to attempt to persuade for the truth of something. Here it is for the believability of the Christian message–the sort of thing Paul did when, as the book of Acts tells us repeatedly, he would enter a place and “argue persuasively about the kingdom of God.”

The questions are tough. Titles of the chapter suggest just how tough the questions McLaughlin sets out to tackle: Aren’t we better off without religion? How can you say there is only one true faith? Doesn’t religion cause violence? How can you take the Bible literally? (You’ll be surprised at how she replies.) Hasn’t science disproved Christianity? Doesn’t Christianity denigrate women? Is Christianity homophobic? (Again, you’ll be surprised by what she relates here.) These are only a sample. She has 12 such chapters.

McLaughlin has a PhD in Renaissance Literature from Cambridge University and a theology degree from Oak Hill College. She is also the former vice-president of content for the Veritas Forum. She comes well equipped for the role she assumes in writing this book.

What I found most attractive throughout Confronting... was McLaughlin’s willingness on the one hand to acknowledge the many places in which Christians have failed to live out what she maintains Christianity stands for, and then making the case for that faith nonetheless. And doing it very persuasively. I do not say that lightly, for anyone who is tuned into the world in which we live knows that the voices against faith have never been louder or, perhaps, never more persuasive. This is a well-read writer, immersed in the culture of our time, but also deeply immersed in the biblical text, as the Scriptural Index at the back of the book makes clear. One gets the impression of great comfort and familiarity with the biblical text.

But the comfort extends to unusual situations of many kinds. In the chapter arguing for “one true faith” she tells about an Iranian science professor who told her he had become a Christian through J.S. Bach. The man was a semi-professional flutist in Iran at a time when classical music was banned and people like him met secretly to play it. A mentor of his told him at one of these sessions, “I cannot hear the cross of Christ in what you are playing.” It bewildered the scientist so much that it set him on a journey and through it discovered, as McLaughlin writes, “the profoundly Christian fabric of Bach’s works” and eventually the reality of a relationship with Christ himself.

One of the surprises offered by the book–which may well be especially helpful to some of our Mennonite Brethren churches in this historical moment–is contained in the chapter “Isn’t Christianity Homophobic?” In it, McLaughlin acknowledges that from her teen years she has experienced strong same sex attractions, though she has never acted on them. Her argument is that while the Bible is “emphatically in favour of racial equality and integration, it cuts equally firmly against same-sex marriage. From a Christian perspective it is entirely consistent to support racial equality, integration, and mixed-race marriages while opposing same-sex marriage.” And whether we are view ourselves as heterosexual or homosexual, we have “agency” in our actions, she argues. “While we do not choose our sexual attractions, we do choose our sexual actions.”

Confronting Christianity is a book I highly recommend. I echo a comment of another reader, “If you’re a believer, this book will not only equip you intellectually but also call you to compassion and empathy for your questioning, unbelieving neighbour, as well as prepare you to bear witness to the Light that has come into the world.”

Harold Jantz is a long-retired former editor of both the MB Herald and ChristianWeek. The Jantzes live in Winnipeg.
Contact: jantz@mts.net