What's New
A FOCUS on Mission
Must Patience Be So Slow?
Harold Jantz: A Heart for the Mennonite Story
Lorlie Barkman: A Life of Creative Engagement
Last Days, First Days
Women in Ministry: Bertha Dyck
January Moment in Prayer “Holy Spirit—Fill Us!”
The Church as the Patient Body of Christ
Advent: Making Much of Jesus: Christmas Day
Advent: Making Much of Jesus: Fourth Advent
Home Arts & Culture A provocateur in biblical interpretation 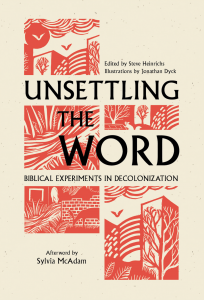 Working from the premise that the Bible has often been associated with the violent and oppressive sides of Christianity’s participation in colonial history, Unsettling the Word creatively seeks an alternative reading of Scripture rooted in exploring “Scripture’s streams of justice.”

The experiment results in a collaborative collection of paraphrased biblical passages, personal reflections, poetry, and cultural commentary in which authors offer unique perspectives from their context, wrestling honestly with the troublesome relationship between colonization and biblical interpretation.

Unsettling the Word is edited by Steve Heinrichs, director of Indigenous-Settler Relations for Mennonite Church Canada. The book offers a collection of biblical reflections from more than 60 indigenous and Settler authors including Cheryl Bear, Walter Brueggemann, Ryan Dueck, Sheila Klassen-Wiebe, and Randy Woodley. 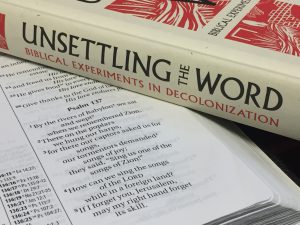 In recent years, I’ve had the opportunity to engage the topic of Indigenous-Settler reconciliation through my teaching role at Columbia Bible College and in my church community. To recognize how influential my own Settler background has been on my own life and faith has been a humbling and transformative experience.

My Mennonite Brethren history and theology, while remaining deeply important to me, is not without blemish. I’ve been encouraged by the work of Indigenous Christians in Canada, such as Terry Leblanc and Ray Aldred, who encourage the church to receive the gift of Indigenous perspectives on theology as integral to walking in reconciliation.

The book affirms the Anabaptist commitment to the formative role of the Spirit and Scripture in the community of faith, which resonates with an MB approach to the Bible as inspired by the Spirit and “the authoritative guide for faith and practice” in the life of the church. And similar to the great diversity MB’s exhibit worldwide, the diverse collection of reflections speak to the many different ways Scripture is formative as people discern together its meaning for us today.

The very premise that decolonization is essential for the church’s interpretation of Scripture has direct – and uncomfortable – implications for MBs today. There is a complex history for MBs in Canada that on one hand tells of God’s provision of land and religious freedom, but on the other, reveals how such provision often came with suffering for Indigenous peoples. As one who benefits personally from this history, I am challenged to engage this complicated past.

Are MBs prepared to consider how our theological tradition has been shaped by this history?

To this end, Unsettling the Word serves as a provocateur in biblical interpretation. The degree to which MB readers are willing to engage this provocation honestly and in the spirit of openness to the Spirit’s guidance for communal interpretation, as Heinrichs invites the reader to do, will determine how MB readers respond.

This is an Indigenous phrase declaring unity and connectedness. The project itself, as a collaboration of Indigenous and Settler authors, models the pursuit of such unity in an area – biblical interpretation – of incredible disunity in the past.

Steve Heinrichs’ passion and commitment to foster unity is inspiring. This collection of voices is a testimony to his commitment to pursue “good relations” in tangible ways.

Additionally, some of the book’s reflections are on the very same biblical passages that were once used to justify colonial oppression, but here are windows into a God who is a loving creator and a reconciler of all of things (e.g., Colossians 1:20). Where the Bible has previously been used as a tool for condemnation and exclusion, Unsettling the Word presents it as a story of invitation and inclusion.

While not a failure, per se, the experimental nature of the book limits its scope. Many questions remain, ones which I’m sure the authors would share as needed for the ongoing work of examining decolonization and Christian theology.

My question, and I think this book contributes to an answer, but not definitively, is where do we go from here? What does it look like for the church to “step up and act” as the afterword challenges?

For anyone asking, “What is the church’s role in Canada’s ongoing work of Indigenous-Settler reconciliation?” this book offers an important contribution to the discussion for the broader Christian community to consider. The reflections in Unsettling the Word give a window into how people are already answering this question.

Additionally, I’d encourage preachers, teachers, and leaders to use this resource in conversation with others in the ongoing assessment of how our interpretation of Scripture influences and is influenced by history and culture. Unsettling the Word is an accessible model for a culturally engaged hermeneutic, something much needed in our churches today.

A study guide can be downloaded here.

“So the Settlers of Babel built a city and a tower that almost reached heaven. It made them famous. And the corporations and her nation-state were proud. And the military stood on guard to protect it and to ensure the continued intake of civilized resources from uncivilized places. Many of the people were content. Many loved the dream they were living. Many were too distracted by the local sports teams and the latest technologies to question the whole set-up. And some were too beaten down by life—understandably so—to think beyond their lives.” (In “The Foolishness of Petropolis,” Steve Heinrichs)

On Exodus 2, Miriam, and Pharaoh’s daughter

“I don’t regret taking the hand of Miriam, taking her lead, living in that moment by her cue, and not that of my father. It was a small but important rejection of the empire’s dictates. And perhaps I used my privilege the best I could. I couldn’t do everything, yet I could respond in that moment, in solidarity, and I could begin – a little – to counter the terrible injustices. It felt subversive to draw from the empire’s resources to support a mother’s care for her own child – a child the empire would have destroyed. No revolution, no Jubilee, but a small symbol, a small conspiracy of hope.” (In “I Chose Miriam,” Jennifer Henry).

“By the shores of the Athabasca, there we sit down,

And there we weep when we remember the way it was

When Creator gave it to sustain our lives…

…We are on the same shores,

but it is no longer the same river.

How can we say, ‘Thank you, Creator?’

I will never forget you, Athabasca, as you were meant to be.

I will teach my children of the way you were

Here in our Promised Land. We will restore you to health.

What good am I if I do not remember who you are?” (In “Reconciled,” Rarihokwats).

[David Warkentin is on faculty at Columbia Bible College, Abbotsford, B.C., teaching in the area of Christianity and culture, and director of Columbia One and General Studies. David is married to Julie and they have two children (Landon and Laila). They are part of The Life Centre (MB) and live in Stó:lō territory (Abbotsford).

Other books edited by Steve Heinrichs