What's New
Through the conflict, life carries on in Ukraine
A FOCUS on Mission
Must Patience Be So Slow?
Harold Jantz: A Heart for the Mennonite Story
Lorlie Barkman: A Life of Creative Engagement
Last Days, First Days
Women in Ministry: Bertha Dyck
January Moment in Prayer “Holy Spirit—Fill Us!”
The Church as the Patient Body of Christ
Advent: Making Much of Jesus: Christmas Day
Home Arts & Culture Values find points of contact 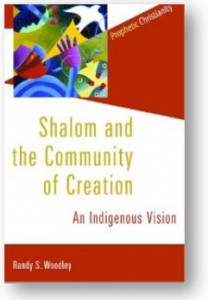 Growing up in B.C.’s Fraser Valley, I knew no First Nations peoples. All I knew was that “Indians” made totem poles, and were chased by cowboys. They were exotic, irrelevant, and absent.

Forty-some years later, what has changed? Canada’s First Nations are politically active and socially diverse. But in the church, many Christians still struggle with native stereotypes. We are even less prepared for the theological questions raised by First Nations cultures.

That conversation finds a good starting point in this book by Randy Woodley. His aim is to show important points of contact between traditional First Nations values and Christian faith. Specifically, Woodley demonstrates – successfully, in my mind – that the Old Testament concept of shalom, “peace, wholeness, completeness,” is embodied and illustrated in a number of traditional values and practices of North America’s First Nations.

Woodley teaches at George Fox Evangelical Seminary, Portland, Ore., where he is professor of faith and culture, and director of indigenous and intercultural studies. He is also a Keetoowah Cherokee, and has been involved in native ministry for more than a quarter century. This is his second book, and grows out of his PhD dissertation at Asbury Theological Seminary, Wilmore, Ky.

His starting point is that biblical shalom is a gift of God, ultimately rooted in Christ. Shalom is a holistic reality that shapes both personal relationships (peace and reconciliation) and structural realities (societies of justice and integrity, seen especially with those who live at the margins). It is God’s “preferred order of existence,” marked by harmony in every dimension of life: with God, with fellow humans, with the land. Woodley sees this mirrored in a “construct” or deep cultural pattern reflected in many First Nations cultures, which he names the harmony way. An examination of the harmony way both reinvigorates our understanding of the Bible and its visions of peace, and gives non-natives (“Euro-Americans”) a better perspective on ministry with aboriginal neighbours.

A few of his key points: biblical shalom is not only about human and divine relationships, but also about our relationship with the land, with our environment. First Nations traditionally have a deep connection with the land and the rest of God’s creatures. This connection to the land, along with an aversion to the colonial and imperialistic overtones of the language of “kingdom,” leads Woodley to suggest “community of creation” (see the book’s title) as a fitting indigenous paraphrase for “kingdom of God.”

One of the fundamental conflicts between aboriginal and Euro-American cultures (and spiritualities) arises from differing understandings of place and time. First Nations value the past and present (resulting in a greater respect for elders), whereas Euro-American culture values the present and future (resulting in a view of time as a commodity, which we can “make” or “take,” “save” or “spend”). At an even more basic level, Euro-American culture is dominated by time-consciousness as opposed to place-consciousness. Those who are time-conscious, Woodley suggests, have an inherent tendency to absolutize, to universalize, to ignore context. And sadly, that describes how the gospel was often brought to First Nations. On the other hand, place-consciousness is something that is central to native spirituality. Woodley walks through a number of stories of Genesis to show how land, God, and covenant are intertwined in the biblical narrative, in a way that would be very familiar to First Nations as well.

Woodley explores several other topics, including the nature of education (mastery of facts versus appropriation by experience), the importance of story in shaping a communal life, and the importance of listening as a posture of respect and humility.

The book is not perfect. It could use some editing to deal with occasional repetition and unevenness in tone. I thought there was some overkill in making the Enlightenment the whipping boy for all that is wrong in Euro-American Christianity. Many writers have unpacked this topic, and rightly so; but I’d guess that the typical reader of Woodley’s book would be familiar with these issues, and wouldn’t need the regular refresher course he offers. For those who are new to this kind of worldview analysis, Woodley’s critiques may not persuade. I’d have preferred his presentation of First Nations life and thought without the constant comparison. But as one whose native ways have been continually maligned or misunderstand by Euro-American Christianity for centuries, Woodley has every right to push back as he sees fit.

Nevertheless, the book’s key strengths lie in its conversation between biblical theology, native life, and traditional lore. Overall, its descriptions resonate strongly with my own experiences in a Cree community.

This book gives voice to a theological perspective that is both insightful and necessary for those of us who live or serve a) near First Nations communities, b) in towns or cities with aboriginal populations, or c) on land originally given by the Creator to Canada’s First Nations. Are any of us exempt?

—Randy Klassen is a member of West Portal Church, Saskatoon, and teaches Bible at Bethany College, Hepburn, Sask. He regularly leads a student team for a week-long experience to the Beardy’s and Okemasis First Nation.

The dark side of being white

Would you cry out for justice?