What's New
A FOCUS on Mission
Must Patience Be So Slow?
Harold Jantz: A Heart for the Mennonite Story
Lorlie Barkman: A Life of Creative Engagement
Last Days, First Days
Women in Ministry: Bertha Dyck
January Moment in Prayer “Holy Spirit—Fill Us!”
The Church as the Patient Body of Christ
Advent: Making Much of Jesus: Christmas Day
Advent: Making Much of Jesus: Fourth Advent
Home Arts & Culturebooks Don’t read this book if… 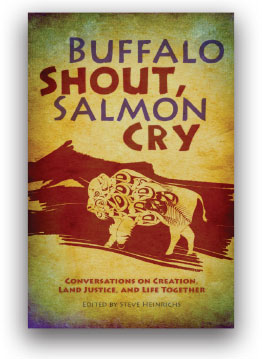 A review of Buffalo Shout, Salmon Cry: Conversations on Creation, Land Justice, and Life Together

People have been coming to this continent in a more or less steady stream for the past few hundred years. It was once fashionable to call the early waves of these newcomers “settlers,” with the implication that the land to which they had come was untamed and in need of civilized attention. It was also once acceptable to refer to the people already living on this wild and uncivilized land in those terms. This mindset facilitated the expansion of empires in a trend now usually called colonialism.

Most Canadians understand the time of settlers and colonies is past, yet many retain the settler-colonial mindset: our claim on this land is superior to any other because we represent progress.

Buffalo Shout, Salmon Cry aims to dismantle this backward progress. You should not read it if you value your comfort. Nor should you read it – and this is just another way of saying the same thing – if you prefer books with which you will unquestionably agree.

The book is heavy and critical, exactly what its subject requires, and so it also risks discouragement, even exasperation. Yet its existence at all, with voices ranging from agnostic and animist to anarchist and Anabaptist, is itself a monumentally hopeful accomplishment. It contains some painfully liberating essays, many of which will be provoking conversation and action in this country long after more accessible books are forgotten.

When Europeans arrived on this continent, their initial contact with indigenous people was like that between a hungry refugee and a gracious host. The relationship soon changed, however, and Christianity has played a major role in its continuing decline.

First, Christianity has been a natural tool of imperial sprawl because it is hierarchical – a worldview where those at the top of the pyramid (God or king or patriarch, for example) deserve their power because they are superior to those at the bottom, who have less.

Second, Christianity has colluded in colonial injustice because of the way it is anthropocentric – putting humanity at the centre of creation, making everything else less important by degree of difference.

The first charge is that any system where ultimate priority is located in a single source will produce a top-down smothering effect, a divine endorsement of assimilation, an ethos of violence.

Practically, this means if I arrive in a new place with the belief that I’ve been sent by God, it’s going to be hard to convince me I should be anywhere else. And if I’ve come with the related belief that God has designs for my new neighbours, designs to which I am privy and they are not, it will soon become difficult to treat those neighbours with the kind of respect I myself would like to be treated.

It’s this rub between the Great Commission from above and the Golden Rule down below – and the consistent choice for the former over the latter – that lends itself so smoothly to colonialist ideals. On these terms, my aim is not just to treat my neighbour as myself, but to transform him into myself.

The book’s contributors provide ample evidence for the way Christianity has indeed colluded in unjust and often violent pressures toward social uniformity. The possibility that this problem might have solutions from within Christian theology is, however, given only passing consideration.

At some point, a second, more constructive volume will be in order. In it, we might read of the way recent Trinitarian theology recovers the possibility that God is not simply an impersonal power hovering over the world, but a Creator who has become a creature within a particular place and time.

That God has identified himself in and through cultural particularities, and not just over or around them, means Christian theology can do better than its typical propensity for conformity.

The presiding thesis of the present volume is clear, however: any such coming theology must not only address the increasingly vogue call for reconciliation with indigenous people but also lead to real restitution.

The second charge against settler Christendom is that by elevating humans above other creatures it has sponsored ecological harm and, consequently, indigenous disenfranchisement. Despite efforts by some of the book’s Christian contributors to offer a less individualistic approach in which humans ought to take care of creation, many of the stronger-voiced indigenous contributors remain unconvinced.

At issue is the way Christians often treat the earth like a disposable loaner, something on which salvation is an exit strategy and our beliefs and about the End amount to a cosmic ctrl-alt-delete. Several authors make important connections between these deeply rooted Christian dualisms and not just our ecological crisis but also current trends in wealth disparity, gender inequality and the way modern capitalism seems to reduce rather than increase democratic freedoms.

In the end, readers will be left with some difficult facts. Colonial racism, settler hubris and Christian proselytization have a history of cooperation in this country because they share a similar posture: each views the indigenous-other as somehow inferior. Either racially or culturally or spiritually, the indigenous person needs the settler to rule or lead or guide.

The Christian way has been conceived as a set of propositions requiring consent or a religious program to be followed, and as a result it has displaced the fact that our way is, after all, a person. What would cross-cultural dialogue look like if the church took seriously its claim that all things hold together in the first-century Palestinian rebel who confronted and was killed by the empire of his day? My hunch is that it would look a lot like this book.

Buffalo Shout, Salmon Cry is a collection of poetry, prayer, prose of several genres and 18 essays from some of today’s clearest spokespeople in the indigenous-settler theological conversation. It is a wild and dangerous book, excruciating like prophetic fire. It is, in the most hopeful sense of the word, unsettling.

—Paul Cumin is the author of Christ at the Crux: The Mediation of God and Creation in Christological Perspective and pastor at Pemberton Community Church (formerly Pemberton Christian Fellowship) in Stl’atl’imx Territory, B.C.

Thanks for the thoughtful review, Paul. I bought the book in response and am reading it. MBH readers should also be aware that the Winter Direction Journal has devoted the entire issue to the matter of our MB relationship to First Nations. This too is very important reading. In reading these, it occurred to me that history of the First Nations and Europeans covers almost exactly the same period of Anabaptist history. While we North American anabaptists are currently on the winning side and are very successful in our culture- I believe that this is recent, local and may be atypical. But because of our history of knowing oppression I believe we have been given some unique tools to be a blessing to the First Nations. It has to begin with understanding and I am realizing that I need to become informed. This book and the recent Direction Journal are part of undertaking a long overdue responsibility.
God repeatedly warned the Israelites that they must never forget that they too were once an oppressed people. I wonder if we anabaptists need to be reminded of that warning.

A very timely reminder that we are settlers in this land and urgently need to change our attitude regarding the people that we have displaced, the people that opened their arms for us on our arrival in this most peaceful land. My wife and I have been very closely involved in the aboriginal community since 1952. I still am involved but my wife passed away in 2011

A very good perspective on a topic conveniently ignored by most.

I must point to an error in the second last paragraph of Mr.Cumin’s treatise. Unless he’s speaking of someone other our Jesus Christ (aka “King of the Jews”) the rebel he’s referring to was not “Palestinian” but Judean. A direct descendent of King David.