What's New
A FOCUS on Mission
Must Patience Be So Slow?
Harold Jantz: A Heart for the Mennonite Story
Lorlie Barkman: A Life of Creative Engagement
Last Days, First Days
Women in Ministry: Bertha Dyck
January Moment in Prayer “Holy Spirit—Fill Us!”
The Church as the Patient Body of Christ
Advent: Making Much of Jesus: Christmas Day
Advent: Making Much of Jesus: Fourth Advent
Home News Standing in solidarity with Indigenous people 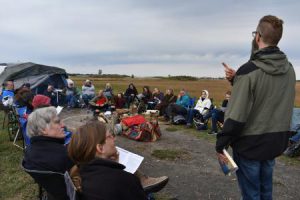 “Our global value of peacemaking is expressed in the Declaration of Solidarity with Indigenous Peoples,” says Mennonite World Conference general secretary César García. “How a church in South Korea or Colombia lives that out is not something we can legislate. It’s an issue we need to discern as churches in our specific contexts.”

On 20 April 2018, Indigenous leaders and spiritual elders of the Tsleil Waututh Nation invited Heinrichs and other church leaders to participate in a public prayer witness to support their struggle. The group opposes the plan to expand capacity of a transmission pipeline for crude oil and diluted bitumen.

The expansion of a 1 150-km pipeline that transmits oil from source to shipping terminal is a contentious subject in Canada. Many Indigenous groups cite environmental degradation and usage of unceded land as reasons to oppose the pipeline.

In wider Canadian society, some oppose pipelines on environmental grounds, others favour the economic benefits.

What began as a prayer event ended in arrest for some participants. They blockaded the entrance to Westridge Marine Terminal in Burnaby, B.C., for several hours until police intervened, dispersing the gathering after handing out criminal charges.

Heinrichs was arrested, tried and convicted. He spent six days in jail in August.

“I chose to act because at the centre of the Christian faith lies the conviction that the Creator suffers with the oppressed; that God takes sides with the victims over-against the dominant powers; and that the people who see the issues of our day most clearly are those pushed to the socio-political margins,” said Heinrichs in his statement to the court at his sentencing hearing. 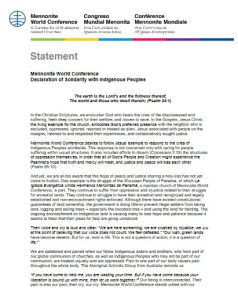 This language echoes the newly approved MWC statement of solidarity, approved at the General Council meetings in Kenya: “In the Gospels, Jesus Christ, the living example for the church, embodies God’s preferred presence with the neighbor who is excluded, oppressed, ignored, rejected or treated as alien.”

“We have global consensus to act on behalf of Indigenous groups [see MWC statement here],” says MWC general secretary César García. “This is one example of one person who did that on behalf of a local indigenous group and the church he represents, regardless of the controversies.”