The importance of cross-cultural listening 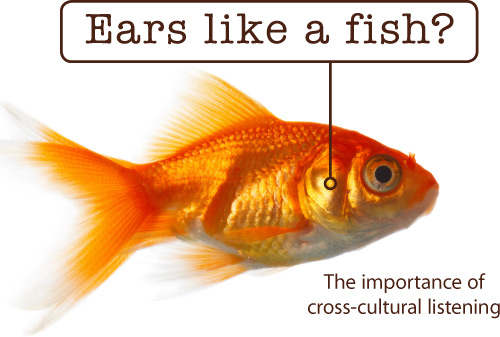 When it comes to talking to others about Jesus, especially those from different cultures, we must thoroughly understand three things: our culture, their culture, and the message we want to convey. Evangelicals typically reverse the order and run out of zeal halfway through.

We’re keen on knowing our message. We’re eager to appear keen on knowing other cultures. And we’re largely oblivious to the value that might come from understanding our own culture. In other words, we’re terrible listeners.

I live in traditional Stl’atl’imx territory and there’s a diagnosis here for this kind of problem: Wa7 ícwa7 st’éna7, t’síla tsóqwaoz – “You have no ears, like a fish.” The body of Christ in Canada has a history of making its way across cultural lines with ears resembling the empty spaces on the sides of a trout’s head.

Everything we say is entangled with our culture. There’s a constantly spinning loop between our view of the world and the effect that world is having back on us. We can no sooner extract ourselves from this loop than inspect the backs of our own eyeballs.

An honest look at our culture

Our first impressions on this land established a pace and posture that remain to this day. Whether it was the influence of a thick-skinned Viking beached on the shores of Newfoundland, or a lost Italian looking for India, North American culture remains largely defined by frantic self-preservation and gold-struck busyness.

In political terms, our movement across this continent has been one of the most haphazard and self-absorbed examples of colonialism in the history of human expansion. In social terms, we isolate individuals from one another as if we believe the mantra about “survival of the fittest.” Economically, we institutionalize greed and treat this land like an impossibly infinite resource at our disposal. Epistemologically, we apply our consumerist lust to certainty, as if knowledge itself were a frontierland available for immediate possession.

Sure, there are good things about our culture too. But for better and worse, our culture shapes us. It’s where we live, how we live there, what we make of it all, and what it makes of us.

The twists and loops of sharing the gospel

So, how can we share the gospel from within our cultural loop? Can’t we just let Jesus stand, front and centre, without all our cultural baggage?

As it turns out, Jesus only complicates things. Once he’s part of the picture, we’re not just caught in the loop between us and our culture, we’re also caught up in a loop between the Father, Son, and Holy Spirit. We’re creatures of our particular time and place, and we are also new creations in Christ. If our objective is to share the invading love of God in our lives, the two loops become inseparable.

But Jesus didn’t just complicate things and leave us to get the story straight on our own.

Jesus is a cultural paradox

Jesus is both a first-century Palestinian Jew and the one in whom all cultures hold together (Colossians 1:17). He is both – and the story about him is similar. The gospel is embedded within human history, and is also the very plotline of history itself.

It’s a fertile paradox and we must resist the urge to resolve it. In one direction is the temptation to leave Jesus in his original culture and only repeat the lessons of a great teacher. In the other direction – the one we are most inclined to – is the temptation to idealize Jesus, to cut him loose from his cultural story and thereby smother both his humanity and ours. We need a way to hold the two together.

The miracle of listening

My church is small and plain, and we’re willing to admit we don’t have all the answers to the problems we face. But we’ve also done a few things right, such as inviting ourselves onto the local Indian reserve to listen to our neighbours’ stories. There was no gospel presentation, no altar call, no soft-sell literature available at the back. Just plain old listening. We’ve done this several times now, but so far, the most memorable visit happened a couple years ago.

At the end of the day, a large Aboriginal elder – broad shoulders, deep face, long gray-flecked ponytail – motioned to speak, and the room gave him the respect he was due. “You people, what you’ve done today,” he began, “you’ve given me courage.” Then he paused and collected himself, “Now I don’t have to think all Christians are @#%holes anymore.”

That man named a former obstacle between him and his Creator – “all Christians” – and explained how the obstacle had just become a passable boundary. Listening had prompted the change. Why? Why did seeing Christians listen to his people give him courage? How did a simple gesture inspire such a massive shift?

Listening does something radical, paradoxical even. Listening conveys an attitude in keeping with the mystery of our faith. Jesus came from the centre of triune life, but didn’t cling to his divine culture as if it were superior to ours. He emptied himself (Philippians 2:6–8).

Although we cannot repeat that miracle – we can’t completely “empty” ourselves of our own cultural ties – we can open ourselves to others for whom Christ came. We can listen to them.

A time to speak

We do, of course, have a message to speak. Jesus didn’t command us to go into all the world and listen to other cultures (Mark 16:15). But too much mouth-first fervour contradicts our message.

Yes, our message does eventually have an offensive edge. But as stewards of Jesus’ story, it’s our responsibility to make sure we don’t offend people before they get to the offensive part. Jesus is supposed to be the stumbling block, not us.

It was our own cultural-religious impulse to speak first and ask questions later that created problems in the first place. So no amount of more talk will turn things around. If we want to make a difference, we need to start making our way differently. We need to start listening.

And when the conversation finally comes around to Jesus? I’m not going to tie myself in knots trying to see the backs of my eyeballs. Sure, I’ll do my best to keep my own cultural tangles out of the message. But I’ll also rest assured that Jesus isn’t restricted by the terms of his introduction. He is, after all, the one who created my eyes in the first place. And, thank God, my ears too.

Human/divine dilemma in church and culture