What's New
Through the conflict, life carries on in Ukraine
A FOCUS on Mission
Must Patience Be So Slow?
Harold Jantz: A Heart for the Mennonite Story
Lorlie Barkman: A Life of Creative Engagement
Last Days, First Days
Women in Ministry: Bertha Dyck
January Moment in Prayer “Holy Spirit—Fill Us!”
The Church as the Patient Body of Christ
Advent: Making Much of Jesus: Christmas Day
Home Arts & Culture Old Testament prophets confront today’s problems 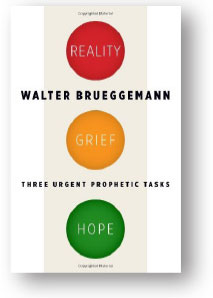 As one of the world’s most prolific and significant Old Testament scholars, Walter Brueggemann continues to do what he has done for more than four decades: read Scripture in ways that confront, convict and nurture the church. Brueggemann’s work, which now spans more than 100 books, has always focused on hearing the Old Testament as an unsettling witness or counter-testimony speaking to the critical issues confronting church and society.

In Reality, Grief, Hope: Three Urgent Prophetic Tasks, one of his four books published already in 2014, Brueggemann revisits Israel’s prophets and contends that the central crisis of the Old Testament – the destruction of Jerusalem and exile of 587 BC – is analogous to the current crisis in the U.S. in which the destruction of the World Trade Center and the intended destruction of the Pentagon on 9-11 are central. Ancient Israel’s exile and the crisis of 9-11 both signalled a significant loss that was as much as anything a loss of confidence in long-standing theological, political and economic certainties.

Brueggemann suggests that the crisis of exile in the Old Testament unfolded in three critical moves.

As a response to this crisis the prophetic voices of the Old Testament fulfilled “three urgent prophetic tasks.”

Brueggemann’s book spends significant time identifying these three assertions as they were offered to Israel and as they speak today.

The U.S., like Israel, Brueggemann contends, has a deep commitment to an ideology of chosenness and exceptionalism that has shown itself in a “sense of entitlement and privilege” and an identity as “a peculiar nation in the world with a peculiar God-given mandate to democracy and freedom.” These claims of exceptionalism have resulted in a distorted reality and an over-stated confidence, both challenged profoundly by the attacks of 9-11.

The prophetic voices of the Old Testament, echoing in the wake of 9-11, are calling for a reality check, Brueggemann argues, for the U.S. to wake up and rethink its claims to chosenness, entitlement and special mandate.

In light of the concluding comments of the 2012 presidential debates that declared “America remains the one indispensable nation” (Obama) and America is “the hope of the earth” (Romney), it seems to me that such a prophetic call is not unwarranted.

In order to overcome the denial of Israel’s failed beliefs, her prophets enacted grief and summoned her to cry and mourn the loss (Amos 8; Jeremiah 9:17–24). Brueggemann contends that today’s denial shows up in “military illusion, economic distortion, racist posturing and skewed religion.”

Against these practices of denial, Israel’s prophets call America to be honest about the failure of military missions, the loss of economic power, the anxiety toward minority groups and the uncertainty and diminishing voice of religious values. The prophetic voices call for relinquishment – embracing the loss – before we can entertain a path through and beyond them.

Once we move beyond denial, the final threat is despair, which shows itself in hopelessness. Today, the despair shows up in anxiety, manifested in self-serving greed, a focus on the private rather than common good, an aggressive violence toward any perceived threat, a romanticizing of “the good old days” and an apocalyptic sense of “end time.”

The prophets offer a hope rooted in Yahweh that counters the need for such anxious actions. Hope encourages those in despair to imagine a life beyond the crisis, a life made possible because of the promises of Yahweh rather than the certainty of the now-fading empire.

With such a hope, greed, aggression and other expressions of anxiety can be fully relinquished. Offering and embodying such an alternative hope in the world is the work of the church.

There is no denying that Brueggemann’s connecting of Israel’s exile with the U.S.’s 9-11 is imperfect and fraught with easily noted difficulties. Connecting Israel’s prophetic texts (gathered as they are around a particular historical crisis) with contemporary crises here and now is always risky, but it is the kind of work the prophetic texts compel us to do in imaginative ways if they are to be anything more to us than historical pieces.

In this sense, Brueggemann is attempting to be faithful to the prophetic tradition by focusing on what the prophets say and what they do. In so doing, he offers to the current crisis a prophetic word that not only criticizes patterns that led to the crisis but also energizes a way forward and through it.

For anyone who is uneasy about contemporary crisis in America and is committed to the Bible as a resource for responding to it, this book should be welcomed and engaged critically and thoughtfully.

As with all Brueggemann books, one cannot read this book and be unmoved. In keeping with the prophetic spirit, it is intentionally provocative and calls for a response. For us, as in ancient Israel, some respond to the prophet with an easy dismissal of the strange ramblings while others respond with conviction, repentance and an ongoing conversation about how we move forward as God’s people through the present crisis.

Brueggemann’s reputation and credibility as a scholar precludes us from dismissing his work easily. He offers deep and significant thoughts about Israel’s prophets and our present hearing of them that deserve careful attention and uneasy wrestling in our lives together.

—Jerry Pauls is an instructor in Old Testament and theology at Columbia Bible College, Abbotsford, B.C.

The gratitude we intend