What's New
How sweet the sound
One MCC Thrift Store Began With a Few...
A Hunger for Conversation
Getting the mental and emotional rest you need...
The Patience of God
2023 Spirit of MDS Fund accepting grant applications
October 2022 update from the CCMBC Executive Board
Arnold Community Church hosts block party to thank...
When Spring returns
An autumn reset
Home News Tribute: Elmer Martens 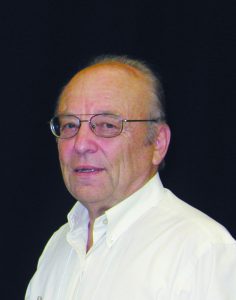 Scholar, teacher, administrator, pastor – but, in everything, educator – Elmer Martens’ life was a testament to faith and knowledge.

“Elmer Martens was the MB church’s scholar for nearly 50 years,” said Lynn Jost, like Martens, a faculty member and former president of what is now Fresno Pacific Biblical Seminary (FPBS).

“Though pressed into service as seminary president for a decade and often engaged in leading in a multitude of other ways throughout his career, Elmer left his greatest mark as the MB Old Testament scholar who served his church. Elmer continued to experiment with creative approaches to teaching, preaching and scholarly writing throughout his career, making his classes engaging, his preaching innovative and his scholarship future-oriented – so much so that on the eve of his death he forwarded a scholarly paper that he intended to present at a professional conference in November that plowed new ground in both method and content.” 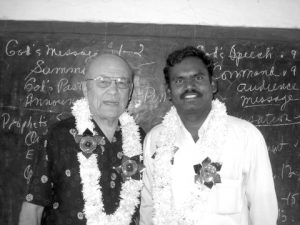 B I Premaiah (r) and Elmer Martens in India

“Though we have lost a friend, colleague, encourager and mentor, we can be grateful to God that Professor Elmer Martens led and served the church with creative energy for more than half a century,” said Jost. “Thanks be to God for his servant Elmer!”

Martens devoted much of his professional life to Mennonite Brethren Biblical Seminary, now FPBS. He was a full-time member of the Old Testament faculty from 1969–95, teaching part time from 1959-61 and for many years after his retirement. He was president of the seminary from 1977–86. 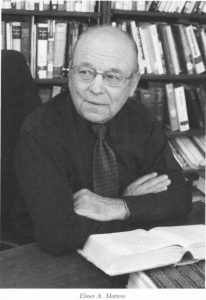 An accomplished author, Martens’ books include God’s Design: A Focus on Old Testament Theology (1981), now in its fourth edition, and Old Testament Theology (1997). His 1986 book Jeremiah is part of the Believer’s Church Bible Commentary, a series with Herald Press for which Martens served as founding editor in 1972. He was co-editor of The Flowering of Old Testament Theology (1992), and recipient of an honorary volume edited by Jon Isaak, The Old Testament in the Life of God’s People (2009). He served on the translation team of the New American Standard Bible and assisted with the New King James Version. Other editing assignments included Journal of Church and Society in 1970–71 and the MB higher education journal Direction 1989–95. He also wrote numerous articles in publications such as the Bulletin for Biblical Research, the Journal of the Evangelical Theological Society and Christian Scholar’s Review.

Tributes from students and colleagues

Elmer’s book God’s Design profoundly shaped the way I read the Old Testament, his Believers Church Bible Commentary series helped me understand and embrace Anabaptist theology, and his emphasis on academic excellence profoundly shaped me as a student at seminary.

But more importantly, Elmer’s love for and commitment to the church continued to inspire me long after I left MBBS.

As editor of the MB Herald, I would regularly receive articles and updates from Elmer about the global church (as he continued to travel the world long into his retirement, encouraging church leaders, pastors and teachers)… along with personal notes of affirmation and encouragement. Elmer’s life and legacy are truly a gift to the body of Christ!

Elmer was passionate about the church, and that included the global Mennonite Brethren family. The deployment of his teaching and leadership gifts contributed to our movement in ways too great to measure.

But there is one we would like to highlight as a direct contribution to the International Community of Mennonite Brethren: his vision for a commentary on the International Confession of Faith that had been completed in 2004. He recruited authors from around the MB world to write commentaries and lessons on each segment of the Confession. It has been translated and published into 15 languages and forms the foundation of every new ICOMB member. His invaluable work in this specific project will impact our global movement for decades.

We thank God for Elmer Martens – for his love and his energy generously given to us in so many ways. Precious in the sight of the Lord is the death of his saints (Psalm 116:15). May the Lord grant him a rich entrance into the Kingdom.

Elmer Martens was one of my favourite seminary professors. His remarkable presentation style, vibrant Christian testimony and advocacy for students was exemplary and inspiring. I recall with fondness how excited he could become over one of my ideas: often seeing potential long before I did, ready with suggestions for turning a paper into a publication.

For many, negotiating the gap between the academy and the church proves to be a challenge. Not so for Elmer. He modeled a happy relationship between scholarship and pulpit ministry. Whether writing a journal article, a church newspaper column or a Sunday sermon, his prose always sparkled with clarity, elegance and well-chosen words. Known as an exceptional preacher (someone who memorized his manuscript and preached without notes), his preaching was appreciated in his home congregation and at national and international gatherings.

Elmer’s energetic personality gave him a competitive edge. Whether it was to argue a theological point, to secure a better financial arrangement or to make a game-winning move, Elmer loved the “cut and thrust” of debate. This sort of sparring was the “stuff of life” for Elmer, and life would be “oh-so-boring” without it. As one who came to cherish him (and still to disagree with him at points!), I found his rigour to be both stimulating and motivational.

I am especially grateful that he stopped in Winnipeg for a visit in July, when he and Phyllis were on a long road trip through Canada and the U.S., celebrating their 60th wedding anniversary. As we said goodbye after lunch together, he prayed for me and recited a Psalm of blessing for my encouragement. It was classic Elmer. I thank God for mentors like Elmer; and I will miss him deeply.

—Jon Isaak, director of the Centre for MB Studies, Winnipeg

Sherry and I cherish the gift Elmer Martens has been in our lives as our teacher, mentor, and friend. While Elmer’s contributions through writing and teaching will continue to bear fruit, the real impact of Elmer’s life emerges in his love for the church, the body of Christ; his willingness to humbly pour himself out in service for others; and his desire to support and open doors for the next generation of leaders – both men and women. This legacy is felt around the world. The day after the memorial service at the Mennonite Brethren Centenary Bible College in Shamshabad, India, one of the students preached in chapel and used Elmer as an example of a servant leader. He said that Elmer is known as a world-class scholar, teacher and leader, but we know him as a footwasher – he came here and he washed our feet.

Dr. Elmer was very simple and humble. He had a great passion for the church in general and India church in particular. Whenever he visited India, apart from teaching, he used to visit churches and conduct seminars for pastors. I had the privilege of participating in some of his seminars which was personally enriching .

His tireless efforts in the ministry was blessing to many people in India. Elmer Martens was a man of commitment, dedication and discipline. He was my mentor and well wisher. He was guiding me in my PhD dissertation. During our morning walks and other times in the Bible College, he always discussed relevant theological issues and inspiring sermons. When I was going through a time of discouragement, he stood by me, encouraged and comforted me.

With Elmer’s motivation, I was able to co-author  “Knowing and Living your Faith – A Study of the Confession of Faith” with Dr. Lynn Jost.

Elmer used to encourage stimulating interactions in the classes. His FORMAL method in exegesis enabled the students to approach the text with confidence.

His death is a great loss to the theological fraternity. Elmer A. Martens was a great scholar, teacher, administrator and pastor.

It is nothing but a divine providence that Phyllis joined Elmer in Glory. She was an able partner, godly in all aspects and exhibited motherly treatment to all the people she interacted in India alongside Elmer. She was a gifted artist and a prayer warrior.

May God comfort the bereaved family and continue to use them to further the cause of Christ all across the Globe.

Motivations for the Promise of Israel’s Restoration to the Land in Jeremiah and Ezekiel, PhD dissertation, Clarement Graduate School, 1972

War in the Bible and Terrorism in the Twenty-First Century, Eisenbrauns, Winona Lake, Ind., 2008

Editor (with Peter Klassen), Knowing and Living your Faith: A Study of the Confession of Faith (International Community of Mennonite Brethren), Kindred Productions, 2008.

“Facing the Mission of the Church at Home” in The Church in Mission, Fresno, Cal., 1967

“Realizing the Vision through Biblical Theology” in The Seminary Story: Twenty Years of Education in Ministry, Fresno, Cal., 1975

Like many others, I was shocked to hear of Elmer’s passing earlier this week. Remarkably, the day before I received this news Elmer had sent me a note telling me how much he was enjoying my book on worship (For the Glory of God), and requesting to room with me at ETS and SBL in San Antonio in November, if Ellen (my wife) was not going. Because I was so busy teaching (in Sydney, Australia), I did not even have time to reply before we heard this sad news. Here is an excerpt from and adaptation of a note I sent Phyllis.

Over the past twenty-five years Elmer has become a very dear friend. Although he attended Bethany Bible Institute in Hepburn, Saskatchewan, with my two oldest brothers, in recent decades he has been like an older brother to me. It has been such a delight and privilege to connect with him at the annual conferences and to receive his notes of encouragement as I have been pursuing the Lord’s call myself—which has paralleled his in some striking ways. We are both farm boys from Saskatchewan, called to minister pastorally to the Lord’s people, but for whom the call has also been to interact with the academy. Elmer has been such a model for me. He has been consistently gentle and humble in his preaching and in his writings, and in his Old Testament scholarship he is always gracious and respectful. The semester he and Phyllis spent with us in Louisville, Kentucky, when I was on the faculty of the Southern Baptist Theological Seminary, will stand out as a highlight in more than forty years of teaching myself. It definitely was the highlight of my experience at that institution. For three decades I have treasured Elmer as a sounding board, as I have been growing as a biblical theologian. He was quick to praise, but always wise in his counsel. With his passing I have lost a very dear friend, and the evangelical world has lost a spiritual and intellectual giant. May the Lord be near to Phyllis and her family in these days of reflection and sorrow.