What's New
MCC BC and MDS Flood Response and Partnership
Resilient Leadership: Praying against burnout
Boldly advancing the gospel from our knees
MCC sends food and relief to Cubans in...
Robert Dagenais, pastor of the Sainte-Thérèse church, is...
More donated hay needed to help farmers in...
“God’s time was perfect”
Hope and pray every day
Resilient Leadership: The gift of self care
Project Redemption
Home News Tribute: Helmut T. Huebert 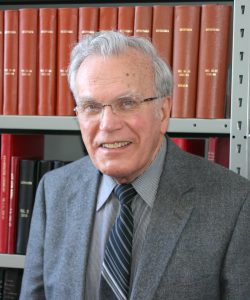 After a day at work at the clinic, Helmut T. Huebert died suddenly Nov. 21, 2016. The orthopedic surgeon leaves a legacy of Mennonite historical research. (See bibliography below.)

The aspect of Mennonite history where Helmut made the largest contribution is in producing maps. Together with William Schroeder (1933–2013), Helmut edited, annotated, produced and published the Mennonite Historical Atlas (1990, revised 1996), which continues to serve as a definitive reference work today.

“These history books and atlases do not represent dry, dusty pages to me, but show the lives and struggles of many people,” Helmut wrote in an autobiographical sketch. “My motivation is to make sure that their lives are not forgotten” (from “My Story,” box 965, Centre for Mennonite Brethren Studies, Winnipeg).

After a number of moves during his childhood, Helmut’s family settled in Winnipeg where he attended MBCI, then studied medicine at the University of Manitoba.

Helmut and Dorothy Rempel’s whirlwind romance resulted in a wedding on a sunny, snowless Saturday in December 1957.

Further studies led to qualifying in orthopedic surgery. The next decades were packed with activities: working at the Winnipeg Clinic and several hospitals starting in 1966, doing church work, Mennonite history research and book publishing, travel and raising a family. He did medical work in St. Kitts, Taiwan and Uganda, and took the family on two medical trips to the Democratic Republic of Congo in 1978 and 1979.

At that time, he was also a member of the Historical Commission of the General Conference of Mennonite Brethren Churches in North America, which developed a comprehensive plan for the four archival centres in the United States and Canada (Fresno, Winnipeg, Abbotsford, Hillsboro).

In 2010, Helmut donated his collection of Russian Mennonite research to the growing Global Anabaptist Mennonite Encyclopedia Online (GAMEO). This gift is just one example of the many ways, he generously supported the advancement of Mennonite studies.

The funeral is Friday, November 25, 2016, at 11:00 a.m. at Portage Avenue Church, Winnipeg. In lieu of flowers, donations may be made to Square One World Media.

How did Helmut Huebert’s work aid your own historical research or quest for family narrative? Share your memories.

So sorry to hear this. A great friend of the Mennonite historical project indeed. My condolences to Dorothy and Susan and the rest of the family.
— I remember when I was doing some research down in the Archives one day (back when it was located in the basement of the MB Bible College building) and a call came in to the Centre, and it was from Dr. Huebert, apparently in the middle of a surgery, asking if “we” all who were there knew what day it was. It happened to be January 6, the day of the founding of the MB Church. After that reminder, I guess he returned to the knee or hip or whatever it was he was working on.