What's New
Through the conflict, life carries on in Ukraine
A FOCUS on Mission
Must Patience Be So Slow?
Harold Jantz: A Heart for the Mennonite Story
Lorlie Barkman: A Life of Creative Engagement
Last Days, First Days
Women in Ministry: Bertha Dyck
January Moment in Prayer “Holy Spirit—Fill Us!”
The Church as the Patient Body of Christ
Advent: Making Much of Jesus: Christmas Day
Home News Storytelling, awards, and commemoration plan at MHSC AGM 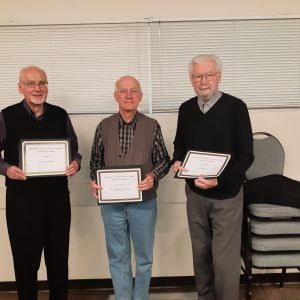 The Mennonite Historical Society of Canada (MHSC) held its annual meeting Nov. 15, 2018, at the Mennonite Heritage Archives in Winnipeg.

Founded in 1968, MHSC celebrated its 50th anniversary with a history conference entitled “A People of Diveristy: Mennonites in Canada since 1970,” at the University of Winnipeg November 15–17, 2018.

MHSC presented three Awards of Excellence to persons who have made a significant contribution to the advancement of Canadian Mennonite history by way of research and/or writing. All three taught in the history departments of either Canadian Mennonite Bible College or Mennonite Brethren Bible College for several decades, leaving their imprint on numerous students and passing on the Anabaptist vision to the next generations.

Adolf Ens began his teaching career at Canadian Mennonite Bible College in 1970. He and his wife Anna served with MCC in Indonesia and Uganda, but spent most of his teaching years in Winnipeg. He was a key player in the publication of many Mennonite history books via CMBC Publications, and is best remembered for his 2004 history of the Conference of Mennonites in Canada entitled Becoming a National Church: A History of the Conference of Mennonites in Canada, and a number of volumes that focus on the local history of the Mennonite West Reserve in Manitoba.

The full citation for these three award recipients can be read on the Society’s website (www.mhsc.ca).

The Society endorsed the founding of a Russlaender Centenary Committee with a mandate to develop a full-fledged historical commemoration program, with events across Canada from Quebec to British Columbia, reflecting and celebrating the story of the 1923 immigration of Mennonites to Canada from the Soviet Union.

A historical re-enactment of the Russlaender immigrants in 2023, with a train travelling across Canada from Montreal to Saskatoon, with stops in Kitchener and Winnipeg, is one of the proposals. The Society also established a committee to remember the 1922 migration to Mexico and Paraguay.