What's New
A FOCUS on Mission
Must Patience Be So Slow?
Harold Jantz: A Heart for the Mennonite Story
Lorlie Barkman: A Life of Creative Engagement
Last Days, First Days
Women in Ministry: Bertha Dyck
January Moment in Prayer “Holy Spirit—Fill Us!”
The Church as the Patient Body of Christ
Advent: Making Much of Jesus: Christmas Day
Advent: Making Much of Jesus: Fourth Advent
Home News MCC celebrates, serves where its work began 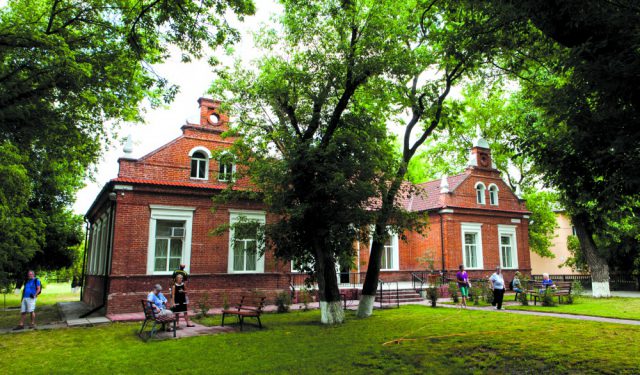 Mennonite Central Committee learning tour participants visit the Mennonite Centre at Molochansk, Ukraine, on June 22. Located in a former Mennonite school for girls, the center was established in 2000 by North Americans. Its wide-ranging projects include helping local schools serve students with special needs, assisting with the cost of medical care for people in financial need and hosting free meals for the elderly. (Matt Sawatsky/MCC)

Under shade trees in a city park on June 16, about 40 Anabaptists shared a picnic of corn grits, rye bread and warm cocoa.

The unusual menu held symbolic meaning. It was a “relief kitchen dinner” like those that saved the lives of thousands of Mennonites and other Ukrainians on the brink of starvation in 1922 and ’23.

The picnickers were Mennonite Central Committee board members from the United States and Canada. They had gathered in Zaporizhzhia, a city near the former Mennonite colonies whose golden age of prosperity shattered amid civil war and famine in the late 1910s.

They came to remember MCC’s beginning a century ago and to see how its partners are continuing its mission to meet human need today.

By visiting Khortitsa, where MCC fulfilled its first errand of mercy, the board members got an early start on celebrating MCC’s centennial in 2020.

“I’m moved by the plight of the people,” said Gwen White of Philadelphia, who chairs the MCC U.S. board and represents the Brethren in Christ. “I love MCC, and this was the beginning of compassion that spreads around the world today.” 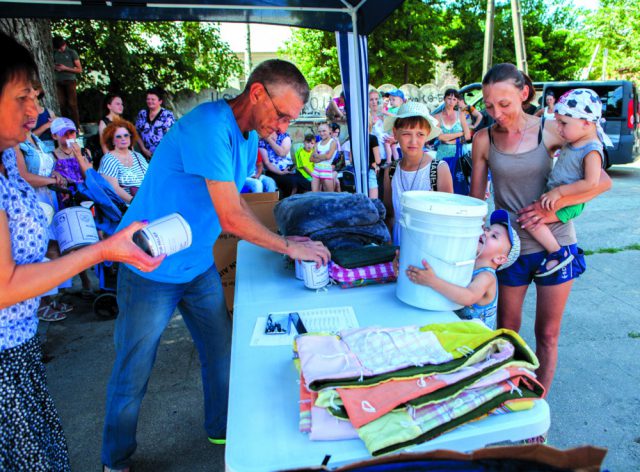 With no ancestral link to Ukraine, White’s connection to MCC’s Ukrainian roots is spiritual rather than personal. But for those whose family histories reach back to the region long ruled by the Russian and Soviet empires, emotions ran deep.

“This was definitely moving, because my grandparents lived through those years,” said Dan Siebert of Main Centre, Sask., a Mennonite Brethren member of MCC’s Canadian board, referring to the traumatic late 1910s and early ’20s. “This brought the whole story back. I am grateful they survived and were able to move to Canada.”

Not all of Siebert’s ancestors made it through Ukraine’s chaotic years immediately after World War I. One of his great-grandfathers was beheaded by forces of the anarchist leader Nestor Makhno, who terrorized Mennonite villages, killing hundreds of people, during the Bolshevik Revolution.

Although Siebert doesn’t know if his ancestors received MCC food aid, he feels a special connection to Ukraine’s historic Mennonite sites. In Khortitsa, the North American visitors stopped at the building that once housed the lumber mill of Jacob Dyck, where the first MCC food kitchen in Ukraine opened on March 16, 1922.

At the height of food distribution in June of that year, MCC served 25,000 meals a day in its kitchens, some in homes and schools, throughout the villages of the Mennonite colonies. In all, MCC served 75,000 people and saved an estimated 9,000 from starvation.

Not only Mennonites were fed, but also Russians and Ukrainians, German-speaking Lutherans and Catholics, Jews and others. Feeding continued until the 1923 harvest. 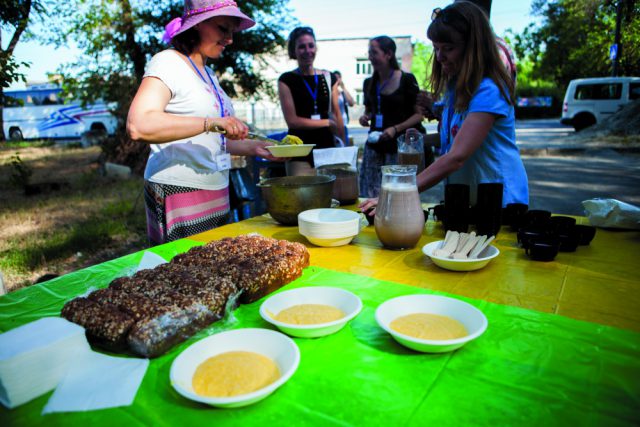 At the picnic, tour participants read from firsthand accounts to bring the famine-relief experience of the 1920s to life.

In one of the quotes, American relief worker A.J. Miller wrote in 1922: “The moment the train halted it was besieged by living skeletons. Not with a rush did they come, but slowly, weakly, too starved to hurry, too famished even to demand, piteously muttering the one sentence that was being wailed despairingly by millions in Russia: ‘Bread, in God’s name, bread!’” 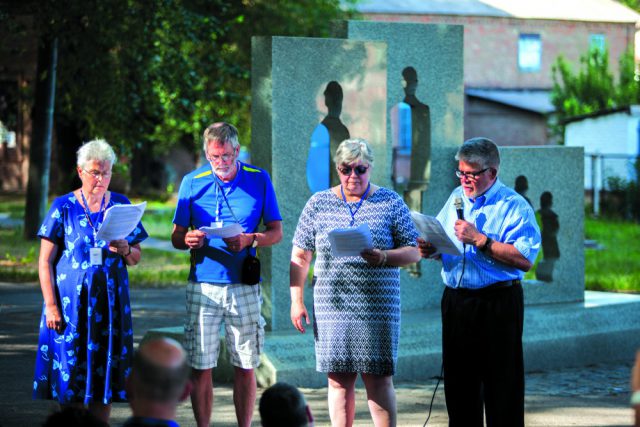 Mary Raber, left, Mennonite Mission Network worker in Ukraine; Peter Wolfe of Langley, B.C.; Catherine Enns of Winnipeg, Man.; and J Ron Byler, executive director of MCC U.S., read from 1920s testimonies of aid recipients and MCC workers at the picnic in Khortitsa on June 16. Behind them is a memorial to Mennonite victims of Stalin’s repression. (Matt Sawatzky/MCC)

In another, famine survivor Katarina Suprunova wrote: “We would have died, we would have starved to death. But then the Mennonites came, sent us people, sent us food. And in this way, we stayed alive.”

Heightening the sense of a gathering in a sacred place, the group laid out their picnic blankets a few yards away from a monument dedicated in 2009 to the Mennonite victims of repression under Soviet dictator Joseph Stalin. It is estimated that one third of the Mennonites remaining in the Soviet Union between the 1930s and 1943 disappeared, were exiled to Siberia or Central Asia or killed.

Earlier in the day, as the group toured Khortitsa, their local guide pointed out numerous houses and buildings of former businesses constructed by Mennonites over a century ago. Few residents know who built them.

“Occasionally we meet old women who remember, but not so often,” she said. 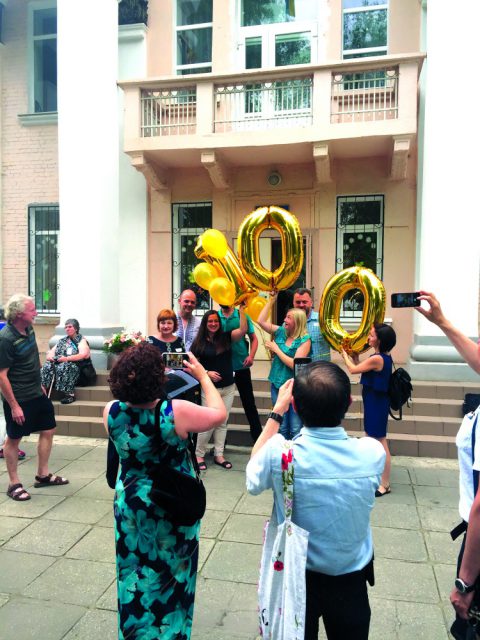 Mennonite Central Committee staff and partners celebrate with 100th anniversary balloons after a service on June 23 in Khortitsa, Ukraine, at a “house of culture” where a Mennonite congregation met until 1935. (Paul Schrag/MWR)

A beacon of light

But for the North American visitors, the memory of MCC’s beginning was rekindled.

“MCC began by responding to a dark time, and it has brought so much light and hope, including to my own country,” said U.S. board member Gabriela Ochoa of Essex, Vt., whose family joined a Mennonite church in Guatemala because her parents were impressed by MCC’s peacebuilding work during a 1980s civil war.

MCC dates its founding to a meeting in Elkhart, Ind., on July 27, 1920, when representatives of several branches of Mennonites formed a “central committee” for Ukraine relief. They saw the wisdom in the Ukrainians’ request for a coordinated effort rather than having to work with several committees.

One hundred years later, what was originally assumed to be a temporary committee continues, White said, as “a beacon of light and a practical example of what it means to be a Christian.” 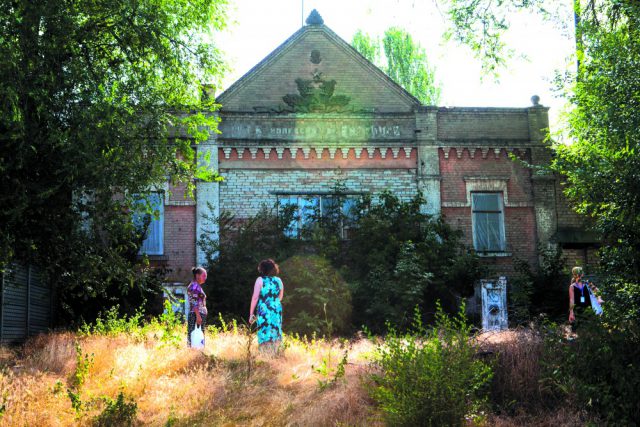