What's New
How sweet the sound
One MCC Thrift Store Began With a Few...
A Hunger for Conversation
Getting the mental and emotional rest you need...
The Patience of God
2023 Spirit of MDS Fund accepting grant applications
October 2022 update from the CCMBC Executive Board
Arnold Community Church hosts block party to thank...
When Spring returns
An autumn reset
Home News PhD student saves history from the shredder 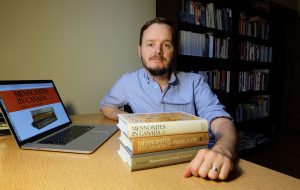 When Jeremy Wiebe heard that the remaining inventory of Mennonites in Canada (volumes 1–3) were in danger of being shredded to save warehouse storage fees, he took action.

Wiebe’s idea was pitched at the January 2017 meeting in Winnipeg of the Mennonite Historical Society of Canada. The Society had been looking for a way to sell its remaining copies of Mennonites in Canada volumes. A liquidation price of $5 per book, or $15 for the set of three meant that MHSC would get at least some return for these valuable books. CMBS agreed to handle shipping to anywhere in Canada for $20.

“Sales have been brisk,” says Jon Isaak, CMBS director. “We are down to only a few copies of volume 1, with more of volumes 2 and 3 remaining.” Isaak noted that some people bought 15 books at a time to give as gifts.

The three volumes – 1,500 pages in total – are widely recognized as the definitive history of the Mennonite experience in Canada 1786–1970. The first two volumes, published in 1974 and 1982, were authored by Frank H. Epp; the third volume, written by Ted Regehr, was published in 1996.

Wiebe, a Mennonite history student in graduate studies at the University of Waterloo, is not surprised by the response. “An entire generation has come of book-buying age since the last volume was published,” Wiebe says. “It would be a shame to see the books destroyed when there are people who would be thrilled to own this history of the Mennonite experience.”

The subtitles of the books show a progression: from “A history of a separate people,” then to “A people’s struggle for survival,” and onward to “A people transformed.”

Today, Mennonites can be found in virtually all corners of Canada from many backgrounds.  Some seek to remain a separate people, some embracing the diversity of what the world offers, and still others finding their identity at some point on the separation-assimilation spectrum.

To order your copies, visit www.mennonitesincanada.ca; for orders outside of Canada, email cmbs@mbchurches.ca for a quote on shipping costs.