What's New
Through the conflict, life carries on in Ukraine
A FOCUS on Mission
Must Patience Be So Slow?
Harold Jantz: A Heart for the Mennonite Story
Lorlie Barkman: A Life of Creative Engagement
Last Days, First Days
Women in Ministry: Bertha Dyck
January Moment in Prayer “Holy Spirit—Fill Us!”
The Church as the Patient Body of Christ
Advent: Making Much of Jesus: Christmas Day
Home Arts & Culture Innocents remembered 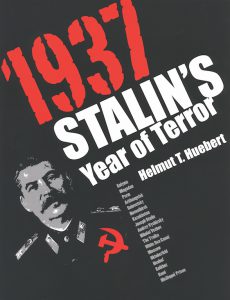 The 1930s, especially the years 1936–1938, was the period in Soviet Russia when thousands of innocent people – many Mennonites among them – were arrested, imprisoned, exiled, and often shot. Helmut Huebert’s book focuses on the year 1937, the height of Stalin’s terror.

The introductory chapters deal briefly, among other things, with the perpetrators of Soviet crime, including Stalin, and some of his henchmen in the Secret Police. But there is also a short biography of Lenin’s wife, Nadezhda Krupskaya, who interceded on behalf of some of the victims.

The largest part of the book is a list of 1,962 names of Mennonite men and women who were imprisoned, exiled, and executed in 1937 (pages 47–207). Based on Peter Letkemann’s extensive
research, the names are listed alphabetically for easy reference by readers looking for relatives.

In addition, there are some 30 brief biographies of some of the victims arrested in 1937. Their stories are interesting, but painful, reading. The accompanying photographs portray Mennonite men, women, and families whose lives were cut short by the brutal regime.

This interesting and valuable book includes many black and white pictures, maps, and a list of useful titles for further reading.