What's New
A FOCUS on Mission
Must Patience Be So Slow?
Harold Jantz: A Heart for the Mennonite Story
Lorlie Barkman: A Life of Creative Engagement
Last Days, First Days
Women in Ministry: Bertha Dyck
January Moment in Prayer “Holy Spirit—Fill Us!”
The Church as the Patient Body of Christ
Advent: Making Much of Jesus: Christmas Day
Advent: Making Much of Jesus: Fourth Advent
Home Arts & Culturebooks More than a conversation 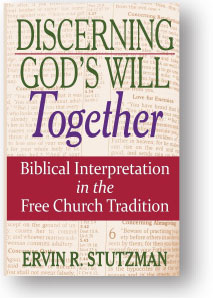 For a small book, it evoked a rollercoaster of responses. In the end, I came away from the book with mixed feelings about its value as a resource.

At first, I thought I had simply misread the title. The book I had assumed to be about biblical interpretation was not turning out to answer the sort of questions I had expected that it would. On the surface, I expected Ervin Stutzman’s book, Discerning God’s Will Together: Biblical Interpretation in the Free Church Tradition to be about how to tackle the process of reading and understanding tough biblical passages, and about moving from interpretation to action. Concrete thinker that I am, I welcomed such a guide.

As I read, my optimism turned to confusion and chagrin. The practical action steps I expected to find were absent. Stutzman begins by stating the vision for his study is discernment in a congregational setting, based on the assumption that “communal discernment in most congregations depends largely on a straightforward reading of the biblical text….” The bulk of his book, however, does not seem to reflect his stated vision. The longest chapter in the book devotes considerable space to Anabaptist hermeneutics, historical-critical method and sociology of knowledge. Though these are important considerations, they are not compatible with my mental picture of communal discernment by lay people reading the biblical text together.

Don’t get me wrong: Stutzman’s definition of discernment is biblical and robust. I support his thesis that discernment is “a means by which people of faith come to understand God’s will for a particular situation.” However, the clarity I expected to find regarding the mechanics of interpretive practice was absent, so that the book was not a helpful manual for Christians seeking to engage the process of discernment.

Worse, the few specific instructions that are present seemed simplistic and unhelpful. For, example, Stutzman quotes Calvin Redekop concerning the discernment process: “It analyzes the sources and meaning of God’s Word in terms of its original meanings and what they are saying today.” I don’t think anyone would doubt that discernment based on biblical interpretation has this in view, but this is far easier said than done.

My chagrin ebbed and encouraged waxed as realized the focus of the book was not how to do the work of biblical interpretation for the process of congregational discernment, rather how to understand the role the discerning community plays in the inevitable process of community (not merely congregational) discernment. My own biases had inclined me to anticipate a simplistic proposal of a one-size-fits-all process.

Nor is discernment merely a matter of exercising congregational polity, democratic voting, or patiently listening to every disparate voice in the room. In fact, Stutzman astutely writes that we “cannot assume…that every congregation provides all of [the] components [of healthy discernment] in sufficient degree to function well as a hermeneutic community.” Apparently, discernment involves far more than just showing up and having a conversation.

Based on the thesis of this book relative to its content, I would suggest that a sequel addressing in more specific terms some practices helpful for discernment should be in the offing. There are no simple rules for discernment in this book, although Stutzman’s proposal that Christian communities need to be discerning communities does seem well-founded. He goes so far as to identify qualities of a discerning community, but seems disinclined to suggest how to put them into practice, which I found both frustrating and confusing.

As a pastor, educator, and conference leader, Stutzman is well aware that the discernment model he points to may not be adequate to solve high intensity issues, like same-sex conflict, that are confronting church communities. Some problems will not go away easily, if at all. This is to be expected, but the fact that Stutzman takes time to express this implicitly devalues communal discernment and robs his work of much of the momentum it might have otherwise generated. Why learn to discern together if it is hard and might not work?

Stutzman notes that discernment processes are important for more than just congregational direction; regions, denominations and international Christian bodies discern, and with the increasing size comes increasing complexity and diversity that make consensus difficult, if not impossible. This problem is magnified, especially because trans-local communities are usually mandated to provide guidance regarding major issues that are most contentious.

On this note, it seems the Free Church theology that undergirds Stutzman’s approach to discernment actually works against a healthful resolution of difficult questions. One respondent in the book states that while “the Constantinian model of Christianity requires an assembled hierarchy and sameness of belief and practice, the early church and the Anabaptist movement both embraced local expressions and diversity of practice.”

In context, this statement seems intended to validate non-traditional responses to traditional theology, especially with respect to human sexuality. Both Stutzman and David Brubaker, one of his interlocutors, contrast Constantinianism against Anabaptism, making the former into a too-familiar theological whipping-boy. Frankly, I find this appeal to Constantinianism, with its association with hierarchical decision-making and stifling conformity, to be tired, obtuse and unfair to Christian history.

Unity is not a negative in the life of the church, nor was there a golden age in the life of either the early church or the Anabaptist tradition. It remains to be seen whether Ervin Stutzman’s wisdom regarding discernment can forge a biblical unity in the denomination he serves as executive director, Mennonite Church USA.

I am optimistic that his words carry much wisdom, and are worth a close read by those seeking a theoretical foundation for discernment. Time will tell who has the temerity to act upon them.