What's New
Through the conflict, life carries on in Ukraine
A FOCUS on Mission
Must Patience Be So Slow?
Harold Jantz: A Heart for the Mennonite Story
Lorlie Barkman: A Life of Creative Engagement
Last Days, First Days
Women in Ministry: Bertha Dyck
January Moment in Prayer “Holy Spirit—Fill Us!”
The Church as the Patient Body of Christ
Advent: Making Much of Jesus: Christmas Day
Home News MHSC AGM 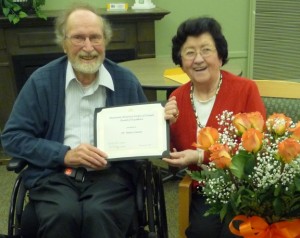 Harry and Gertrude Loewen receive the MHSC Award of Excellence.

At the annual Mennonite Historical Society of Canada meetings held at Winnipeg’s Mennonite Heritage Centre on the Canadian Mennonite University campus Jan. 17–18, 2014, celebration and the usual strong sense of collegiality provided a fertile environment for considering further ways of highlighting our history as Canadian Mennonites.

The Award of Excellence is given annually to persons who have made significant contributions to the advancement of Canadian Mennonite history by their research and/or writing. This year, Chair of Mennonite Studies founder Harry Loewen, now of Kelowna, B.C., was chosen as recipient of the MHSC annual Award of Excellence. The Chair (currently held by Royden Loewen), which played a significant role in the Mennonite Historical Society of Canada’s work, marks its 35th anniversary this year.

Serving as teacher, researcher and writer, Dr. Harry Loewen knew how to reach both popular and academic audiences. He has been an inspiration to many young intellectuals over several decades.

Harry Loewen’s publications include a comparison of 16th-century Anabaptism and Lutheranism, an early 20th-century work on Mennonites in the Soviet Union, and his own story of coming to Canada with his widowed mother. He also approached contemporary topics such as Mennonite literature and Mennonite identity, with his collection Why I am a Mennonite.

The society sponsors a variety of projects including the MHSC Archivist group taskforce created two years ago to explore the possibility of a national Mennonite photo database. Thus far, eight partners have pledged $27,000 for this project.

The genealogy committee reports a new content management system for the website (www.mennonitegenealogy.com) and members continue to write and edit articles for the Global Anabaptist Mennonite Encyclopedia Online (www.gameo.org).

This year, new faces extended the table. The society was delighted to invite the Mennonite Heritage Village (Steinbach, Man.) to become a formal member. Further, Mennonite researchers from Brazil, youth representatives from Mennonite Church Canada and the Canadian Conference of Mennonite Brethren Churches, and several other guests added a welcome dynamic. (Denominations may send a representative to the annual meeting for every 10,000 members.) 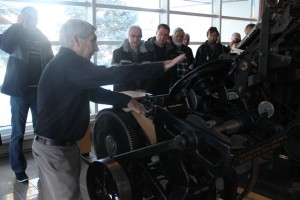 Guests joined the society Friday for the annual learning tour. Prairie snows let up enough to allow three vans to travel an hour and a half south to Altona, Man., for a tour of Friesen’s Corporation. The tour of the impressive book printing company celebrated the Society’s long relationship with Ted Friesen, former co-owner of Friesen’s and one of the society’s founders. Friesen’s adaptation to technological advancement and the high-quality books produced are both instructive and impressive.