Mennonite Central Committee in Canada history soon to be published 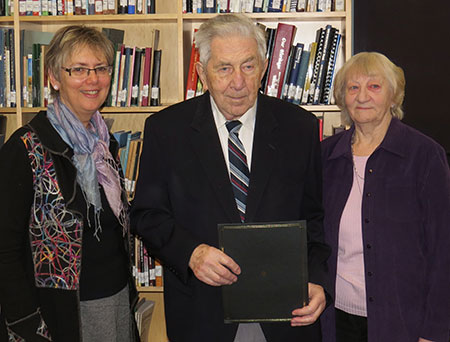 Winnipeg’s Bill Schroeder received the Mennonite Historical Society of Canada (MHSC) award of excellence at the annual meetings held in Winnipeg, Jan. 18–19. Well-known for his historical maps, publications, volunteer work, and decades of leadership on tours to Russia, Schroeder co-authored The Mennonite Historical Atlas with Helmut Huebert. The atlas has sold over 7,000 copies and is a mainstay in most Russian Mennonite research libraries.

Society members were delighted to meet Schroeder and his wife Augusta at the award ceremony, held in the Winnipeg Centre for Mennonite Brethren Studies. It was a fitting location for the ceremony as Schroeder has volunteered and done historical research for the Centre since it opened in 1969.

As the nomination emphasized, “Bill Schroeder exemplifies Mennonite historical research with his quiet tenacity, humble demeanor, and collaborative approaches, all the while cognizant of relationships and striving for excellence.”

The Award of Excellence is given annually to persons who have made significant contributions to the advancement of Canadian Mennonite history by their research and/or writing.

Esther Epp-Tiessen reported on the challenges and the inspiring moments experienced researching and writing the history of Mennonite Central Committee in Canada. The MHSC project is in press, with launch scheduled for Dec. 13, 2013, marking 50 years to the day of MCC Canada’s founding meeting in1963. A study conference co-sponsored by the society’s productive Divergent Voices of Mennonites in Canada and University of Winnipeg’s Chair for Mennonite Studies is being planned in conjunction with the book’s launch. MHSC will also hold its next AGM in Winnipeg at that time.

The society was pleased also to hear that the Global Mennonite History Project’s North American volume authored by Royden Loewen and Steven Nolt has been launched. This fifth and final volume is being translated into Spanish and French.

The society sponsors a variety of other projects including its recently revived archives committee. An online photo database is designed to help Mennonite archives across Canada manage their collections. This service will increase public access to the extensive accumulations of photos housed in Canadian Mennonite archives. The database project testifies to the on-going good relationships and cooperation among Canadian Mennonite historical societies and their participants.

Web-based projects include a genealogy website still at the initial stages and in fundraising mode, and the long-standing Global Anabaptist Mennonite Encyclopedia On-line (GAMEO). The latter was envisioned and launched more than 25 years ago to make the database from Mennonites in Canada Volume II accessible to researchers. It grew to become North America-wide and last year globalized its mandate to re-structure itself as a sub-group under Mennonite World Conference. 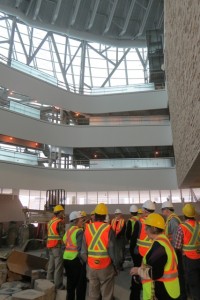 It has become a tradition to set aside a block of time for a learning tour. This year the board had the opportunity to take a “hard hat” tour of the Canadian Museum of Human Rights, still under construction in downtown Winnipeg. Impressed with the size and architecture of the building set to open next year, participants benefited from tour guide Angela Cassie’s explanations of the unique materials, symbolism, and opportunities the museum will provides to Canadians.