What's New
Boldly advancing the gospel from our knees
MCC sends food and relief to Cubans in...
Robert Dagenais, pastor of the Sainte-Thérèse church, is...
More donated hay needed to help farmers in...
“God’s time was perfect”
Hope and pray every day
Resilient Leadership: The gift of self care
Project Redemption
Blue Christmas
“Repent, for the kingdom of heaven is near.”
Home News Mennonite Historical Society of Canada AGM 2015 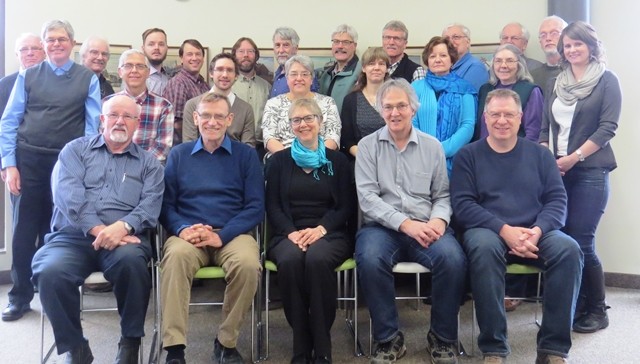 The Mennonite Historical Society of Canada held its annual general meeting Jan. 16–17, 2015, at the recently expanded Conrad Grebel University College Library and Archives in Waterloo, Ont. Society members from across Canada had the privilege of experiencing the variety in the Ontario Mennonite story as expressed both in the facility itself, and in a tour that gave members a glimpse into the local Old Order community. Members also continued to press forward with their work of telling the Mennonite story and making it accessible in its diversity, across Canada and the global.

Experiencing Ray Dirk’s traveling exhibit “Along the Road to Freedom,” which portrays stories of women who led their families out of persecution and suffering in World War II Russia to lives of freedom and peace in Canada, reinforced how important it is to remember our history as the foundation of the contemporary Mennonite witness.

Touring that exhibit in the newly expanded library and the Mennonite Savings and Credit Union Centre for Peace Advancement gave a concrete raison d’etre to the latter’s vision of fostering new ways to advance peace in a conflict-filled world.

The excursion organized by board member Maurice Martin took society members to another dimension of what it means to be Mennonite in Ontario with a tour that included a local Old Order church, a two-room school house, and dinner on an Old Order farm.

Amsey Martin, a deacon and school teacher in that community, articulately and thoughtfully explained worship and educational practices, graciously responding to the many questions of his visitors.

The final stop for dinner was a highlight of the afternoon. Twenty society members were hosted by a local family with a sumptuous meal of farmers’ sausage, scalloped potatoes, home grown vegetables, and finished by freshly baked pies. 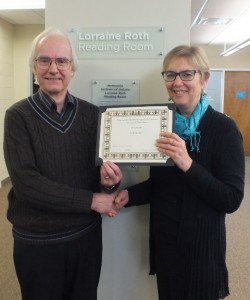 In this setting, it was a delight for the society to award Sam Steiner, who has devoted much of his life to preserving the Ontario Mennonite story in all of its complexity, with the MHSC Award of Excellence. The Award is given annually to persons who have made significant contributions to the advancement of Canadian Mennonite history by their research and writing.

He also prioritized collecting genealogical information requested by so many.

In his role as archivist, he became the founding editor of Mennogespräch (Menno-conversation), now Ontario Mennonite History. In Search of Promised Lands: A Religious History of Mennonites in Ontario, soon to be released by Herald Press in its studies of Anabaptist and Mennonite History series, is a welcome culmination of his dedication to collecting and preserving Mennonite history.

The Mennonite Historical Society of Canada owes a debt of gratitude to Sam. His long standing service on the executive committee of the society shaped its direction. His was the vision that instigated the highly successful Global Anabaptist Mennonite Encyclopedia Online (GAMEO), the governance of which was taken on recently by Mennonite World Conference.

Sam is still a member of the Canadian editorial committee which continues to provide articles. In January, it welcomed a young francophone historian Zacharie Leclair, of the Société d’Histoire mennonite du Québec, to their group. It is expected that his translations of articles into French will provide an important feature in the movement toward becoming global, multi-language, and multi-regional. Finding a general editor is a priority as this project continues to grow.

It is rewarding to see other areas significant to the society’s work continue to develop. An important committee of the MHSC is the archives group. Its news that hard work over the past year has resulted in a functional “Mennonite Archival Image Database” (MAID) was received with anticipation for the ways this will become a useful tool for the various archival partners and thus be of great benefit to researchers.

The gifts of technology are also being realized in the potential for continuing to disseminate the Mennonite in Canada series. Volume III is already available as an e-book via Scholar’s Portal and Internet Archives. With hard copy sales having dried up for all volumes, e-book options are also being explored for Volumes I and II.

Finally, the society is excited to announce plans for a new project designed to celebrate its 50th anniversary in 2018. The Mennonites in Canada series tell the story until 1970, the time when the MHSC itself was launched. Celebrating 50 years will be an ideal time to tell the story of “Mennonite newcomers in Canada.”

It is hoped that this project will stimulate provincial societies to collect oral histories. Plans are also being made for a 50th anniversary history conference which it is anticipated will result in a monograph.