What's New
Through the conflict, life carries on in Ukraine
A FOCUS on Mission
Must Patience Be So Slow?
Harold Jantz: A Heart for the Mennonite Story
Lorlie Barkman: A Life of Creative Engagement
Last Days, First Days
Women in Ministry: Bertha Dyck
January Moment in Prayer “Holy Spirit—Fill Us!”
The Church as the Patient Body of Christ
Advent: Making Much of Jesus: Christmas Day
Home Arts & Cultureart “Along the Road to Freedom”: Suffering mothers model grace

“Along the Road to Freedom”: Suffering mothers model grace 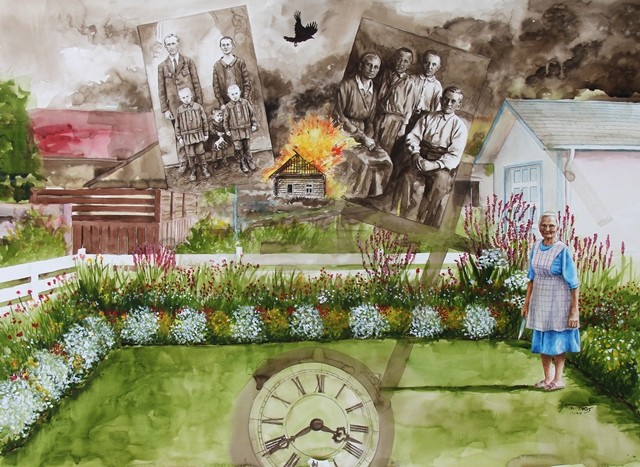 To keep a memory alive, curator and artist Ray Dirks reached for an unusual solution. Dirks has embarked on a project to paint as many as 20 canvasses that will try to capture the stories of Mennonite women whose faith and courage helped them bring their families out of the Soviet Union amid the confusion and turmoil of the waning months of World War II. The first selection will be ready for an opening Oct. 14 at the chapel adjacent to the Mennonite Heritage Centre Gallery on Winnipeg’s Canadian Mennonite University campus.

Dirks embraced the project at the request of refugee children and grandchildren who formed a committee to find a way of honouring the mothers who brought them to safety – and eventually to Canada – nearly 70 years ago, approximately 75 years after the fathers were taken during Stalin’s purges in the late 1930s. The committee consists of Henry Bergen, Nettie Dueck, John Funk, and Wanda Andres, all of Winnipeg.

Dirks will be painting canvasses commissioned by family groups, as well as Mennonite Central Committee, and Friends of the Ukraine, in each case incorporating a number of scenes into a canvass. The cost to sponsor a painting is $2,000.

We live in a culture that knows very little about suffering. Whether the stories are those of the Russian Mennonites in the Soviet era, or the stories of people who suffered more recently in Latin America, or DR Congo, their reminder of where we came from – the spirit that sustained people who endured privation and hardship – is good for us. More importantly, they may teach us that “mourning” or suffering for Christ’s sake are integral parts of following Jesus.

At the heart of this unusual project is the idea of memory. How can the memory and meaning of a period of intense loss and suffering in the story of the Mennonite church community be retained?

In Mennonite circles, the people most conscious of our history of suffering have shown the greatest compassion for the poor and the dispossessed, the most generous giving to a range of mission ministries, and participated in the most active churches.

Dirks, who has given much of his attention in recent years to the art of people of African and Asian backgrounds, has long wanted to reflect stories out of his own stream of Mennonite history. He fears they are being lost.

One of his paintings will depict a great-aunt who arrived alone in Canada after World War II. She had been the mother of five children. Three of them died young and two were taken from her when she was fleeing Russia. She never saw them again. Her husband was arrested during the Stalin purges and never returned. She remained single until her death and an obituary for her ended with a statement that noted “what a peaceful, lovely, gracious woman she was.”

That’s how Dirks remembers her, and that’s how he has tried to paint her. However, hers will be the one painting that also has the image of Joseph Stalin on it. “Many people who’ve sponsored a painting have said they don’t want them to be horrible, they want them to be positive,” says Dirks; they wouldn’t want Stalin on the canvas.

It was the faith that God was watching out for them that gave many of the women the ability to deal with the fears and losses they experienced. There is a notable sense of “grace and forgiveness and absence of revenge” in the responses of the people who lost so much during their years in the Soviet Union, says Dirks. In fact, one of the paintings will be sponsored by Friends of the Ukraine, a group organized to assist in Ukraine’s reconstruction after the collapse of the Soviet Union.

The name given the commemorative art project is Along the Road to Freedom. It recalls the trek many families made in an attempt to escape the Soviet Union for safety in the west. Mennonites from colonies scattered in various parts of Ukraine joined the retreating German army in fall 1943 in that effort.

“What would Dad say if I lost my kids?”

Henry Bergen’s family was among them. Almost everyone in his village of Gnadental, in the colony of Baratov, loaded provisions and some precious items on perhaps 60 or 70 carts, joined the flight. He was with his mother, two brothers and a sister. They faced an approaching winter. A month and a half later, after dealing with mud and snow, they were put onto a train and taken still further west.

He recalls a day when they had reached a town on the Oder River not far east of Berlin. He saw his mother sitting on a pallet of straw, in a school where they were being housed. The Russians were shelling the town. He says she was sitting quietly in her space and then suddenly told her children, “Now, let’s go.” She gathered up her children and led them to a train station where a hospital train was sitting, ready to start off. “We were allowed on,” says Bergen. “As I understood, we were the last train before the bridge was destroyed.”

Before long the family reached Potsdam, but then went through the terrible bombing of the city in April 1945. From there, they lost each other for a time. His sister remained in Potsdam; as his mother and the boys fled the city, she and Henry’s younger brother ended up in one place, while Henry and the third brother were in still another. It was through their sister that the boys and mother were eventually reunited in 1946.

By late 1947, with the help of relatives in Manitoba and B.C., the family came to Canada. Even though they suffered much, Bergen says they were always grateful that they didn’t suffer the fate of many others who had fled Russia with them, who were either forcibly returned or persuaded by false promises to return to the Soviet Union. Of the 35,000 Mennonite refugees who reached Poland or Germany, approximately two-thirds were taken back, large numbers of them directly into northern Russia or Siberia, where many of them perished.

Bergen says that in recent years he learned that his father was executed soon after his arrest in 1937. Some of the women who returned to Russia did so because they hoped they might be reunited with their husbands. Women like his mother faced very difficult decisions, he says. “She carried the weight of keeping the kids together. She said, ‘What will Dad say if I lost my kids?’ Normally, couples supported each other, now the weight was all on the mothers’ shoulders. That story needs to be remembered.”

That’s the hope of the Along the Road to Freedom project. Each of the 20 paintings will tell their own story, in each case tied directly to experiences of the family sponsoring the painting. Once the exhibition at the Mennonite Heritage Gallery has ended in January 2013, the paintings will be available to travel across Canada and possibly even to Europe. Churches will also be able to secure paintings for events tied to telling the stories of the refugee experience. One exhibition is already scheduled for Steinbach. Eventually the paintings will find a permanent home in Winnipeg.

—Harold Jantz is a member at River East Mennonite Brethren Church, Winnipeg. He is founder of Christian Week, and served as editor of the MB Herald 1964–1985. Members of his own family were once refugees like these mothers, a fact which has helped him relate to new Canadians who came from conflicted locales in Vietnam, China, and Africa.