What's New
Through the conflict, life carries on in Ukraine
A FOCUS on Mission
Must Patience Be So Slow?
Harold Jantz: A Heart for the Mennonite Story
Lorlie Barkman: A Life of Creative Engagement
Last Days, First Days
Women in Ministry: Bertha Dyck
January Moment in Prayer “Holy Spirit—Fill Us!”
The Church as the Patient Body of Christ
Advent: Making Much of Jesus: Christmas Day
Home Arts & Cultureart Listening to silenced voices

Voices of Conscience: Peace Witness in the Great War 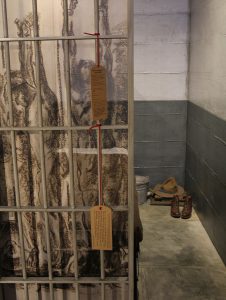 The cell at the Mennonite Heritage Gallery. PHOTO: Ray Dirks

The gallery was quiet when I went in; my lunch break didn’t appear to be during peak visiting hours. I walked as softly as I could. Museums and galleries seem to have that effect on people – our quietness translates as reverence.

I had come to see the new exhibit at the Mennonite Heritage Centre (MHC), Voices of Conscience: Peace Witness in the Great War.

This American exhibition was brought to the MHC Gallery from the Kauffman Museum in North Newton, Kansas. It highlights the Hutterite war resistance during World War I and follows what life was like for those who came to Manitoba to escape persecution.

In the preface to the exhibit, Hutterites are referred to as our Anabaptist “cousins.” If we’re using this familial language, I would describe my connection to the Hutterites as a cousin twice removed: a relative that you sort of know but make a lot of assumptions about.

I grew up knowing of the Hutterites; being from southern Manitoba, I heard about the Hutterites from my grandpa, who enjoyed visiting the nearby colony. A provincial choir I was a part of in high school sang at a Hutterite colony, and after the concert we played volleyball and ate lunch together in their dining hall. The importance of community was reflected in how they did life together, and I felt at home there.

I hadn’t thought about why that was until now.

The stories in the exhibit showed me that Mennonites and Hutterites have more commonalities than differences.

We share a similar history, have often felt misunderstood or misrepresented by the people around us, and we believe that the love our faith calls us to is the opposite of war and violence.

Without realizing it, these similarities – our love of our communities, our emphasis on the importance of family – are what helped my anxious, teenaged self feel right at home.

The exhibit is made up of individual experiences of conscientious objectors, with a focus on the choices made by Hutterites during conscription for the First World War.

The story of four Hutterite men imprisoned in Alcatraz for refusing to participate in war is made even more powerful by the prison cell built in the corner.

You can not only read about “The Hole,” but go in and sit on the cot as I did. I looked at the folded uniform on the floor. The men refused to put it on and were punished for it. The bodies of Joseph and Michael Hofer, who died of mistreatment, were returned to their families, dressed in full military uniform.

It might seem, to those of us who have never experienced living in a country at war, that conscientious objection isn’t applicable to our lives today. What I came to understand through the Voices of Conscience exhibit is that simply isn’t true. There is still violence in the world.

We as Canadians have not been called to take up arms against another nation in recent decades, but our culture has conditioned us to respond in violence. Fighting and aggression are accepted, even encouraged. Society has expectations of how people are act to fulfill their “roles”, and that pressure shapes a lot of our decisions.

The history of conscientious objectors is important to Anabaptists because we still live in a violent world. The choices they made are not so different from the ones we have or will have to make, and we can learn from their sacrifices.

As Christians, we are called to respond to the world by loving our neighbours as ourselves and turning the other cheek. In the MB Confession of Faith, Article 13, it says that “alleviating suffering, reducing strife, and promoting justice are ways of demonstrating Christ’s love.”

These are words of action and participation. Nonviolence is not inaction.

Consider visiting the Voices of Conscience: Peace Witness in the Great War exhibit at the MHC. Sit in the cell for a moment and meet your questions there in the quiet. Maybe you, too, will come to new realizations.