What's New
A FOCUS on Mission
Must Patience Be So Slow?
Harold Jantz: A Heart for the Mennonite Story
Lorlie Barkman: A Life of Creative Engagement
Last Days, First Days
Women in Ministry: Bertha Dyck
January Moment in Prayer “Holy Spirit—Fill Us!”
The Church as the Patient Body of Christ
Advent: Making Much of Jesus: Christmas Day
Advent: Making Much of Jesus: Fourth Advent
Home News “I cannot forget that horrifying memory”

Nur Jemon remembers that the day she fled her home in the Rakhine district of Myanmar started as it did every other day.

The Rohingya Muslim woman was cooking rice when the military stormed her village, killing unsuspecting men, women and children, including Jemon’s niece. She says she was sexually assaulted by armed men and beaten and then fled on foot with her seven children. 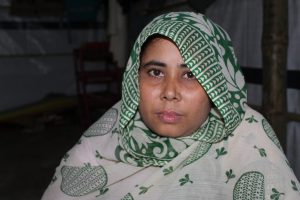 Nur Jemon is a Rohingya Muslim woman from the Rakhine district of Myanmar who is staying in a refugee camp in the Cox’s Bazar region of Bangladesh. PHOTO courtesy MCC

“Being raped was the most difficult part for me. I had to act like a normal person. I needed to help my children cross the border safely,” Jemon says. They walked for five days, much of the time going without food.

Following an attack on police posts by the Arakan Rohingya Salvation Army (ARSA) last August, the Myanmar military known as the Tatmadaw, police and ethnic Rakhine armed groups have carried out extensive destruction of predominantly Rohingya villages and violent attacks on individuals identifying as Rohingya in western Myanmar.

Since August 25, nearly 700,000 Rohingya have fled from Myanmar into southeastern Bangladesh’s Cox’s Bazar District, including Jemon and her children.

The massive influx of Rohingya refugees into Bangladesh has overwhelmed existing basic services, and refugees live in poor conditions with limited access to shelter, food, water and other essentials.

MCC is responding to the needs of Rohingya refugees in Bangladesh in collaboration with other Canadian Foodgrains Bank members by providing emergency food, cooking stoves and fuel.

MCC supported one month of food distributions last spring to more than 27,000 refugee households, which is about 144,000 people. The project was worth $C100,000.

The food rations were made in refugee settlements in Balukhali, Kutupalong and Moinarghona, Cox’s Bazar, Bangladesh. Food packages including lentils and oil were given in coordination with rice distributions carried out by the UN’s World Food Program. 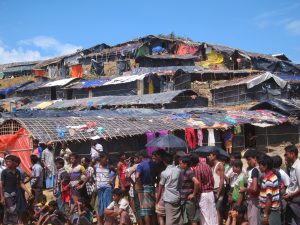 MCC has also contributed about $C65,000 to a project implemented by World Renew, in partnership with Christian Aid, to create 20 community cooking spaces and provide 500 households with stoves and cooking fuel in Jamtoli refugee camp, Bangladesh.

In spite of the difficult conditions of the refugee settlements in Cox’s Bazar, Jemon says she’s happy her family is alive and relatively safe. Still, the trauma of the brutal assault haunts her.

“I cannot forget that horrifying memory. How can I forget? It is always there in my mind. I am surviving because of my children. They need me,” Jemon says.

MCC has ongoing work in Myanmar, including supporting the Myanmar Institute of Theology’s Peace Studies Centre and Women for the World’s work in Rakhine that promotes peace through women’s savings groups, disaster risk reduction and community development.

[Rachel Bergen is a staff writer for MCC Canada – Mennonite Central Committee: Relief, development and peace in the name of Christ