What's New
A FOCUS on Mission
Must Patience Be So Slow?
Harold Jantz: A Heart for the Mennonite Story
Lorlie Barkman: A Life of Creative Engagement
Last Days, First Days
Women in Ministry: Bertha Dyck
January Moment in Prayer “Holy Spirit—Fill Us!”
The Church as the Patient Body of Christ
Advent: Making Much of Jesus: Christmas Day
Advent: Making Much of Jesus: Fourth Advent
Home News Compelled by Christ to serve

Chapter one of the MCC centennial story 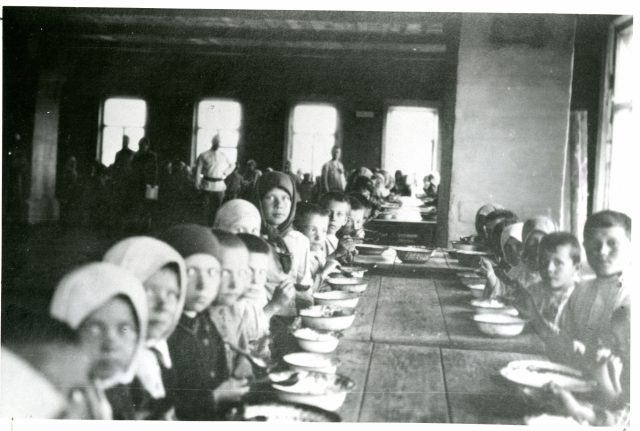 This photo, circa 1922, shows children in an MCC feeding kitchen in southern Russia (present-day Ukraine), where MCC served simple meals consisting of bread, cornmeal and warm cocoa. Severe flooding in the Volga region, the economic aftermath of the First World War and the disruption of the Russian revolution led to a prolonged famine which killed an estimated five million people between 1921–22. (MCC photo)

“At the railroad stations, the sight was appalling. The moment the train halted, it was besieged by living skeletons. From out of the rags were lifted bare arms, the wasted fingers extended toward the car windows in entreaty for food.

These were the words of A.J. Miller, penned in southern Russia (present-day Ukraine) in 1920. Thousands were suffering in the wake of the Russian revolution. Violence, pillage, hunger, disease… death. Mennonites in Canada and the U.S. heard the pleas of their distant cousins. “What can be done?” they asked.

Mennonite groups knew they would need to work together to accomplish the daunting task ahead. But inter-Mennonite cooperation had always been hindered by differences in theology, practice, culture, and language. It was hard to imagine a jointly owned effort.

Nevertheless, the biblical call was clear: “As we have opportunity, let us do good to all people, especially to those who belong to the family of believers” (Galatians 6:10). There was no choice other than to respond – to be the hands and feet of Jesus to strangers. To become the living gospel.

Five Mennonite denominations agreed to form a temporary “central” committee to gather and distribute relief supplies. MCC was born. It was September 27, 1920.

Not surprisingly, this fledgling agency faced obstacles. Clayton Kratz, one of the first three workers sent by MCC to oversee the relief efforts, was arrested by the Red Army and disappeared without a trace. Delays in food shipment meant the first relief kitchens couldn’t open until March 1922. And the local government insisted MCC clothe and feed all people in need, not only Mennonites.

These beginnings indelibly shaped the work of MCC.

For 100 years, MCC has upheld the clear and urgent call to help those in need – regardless of nationality, race or creed. We have been a “big tent” under which Mennonites and Brethren in Christ (now known in Canada as Be in Christ) have gathered to work together toward a common mission. And our service has been influenced by a spirit of generosity, tenacity, and sacrifice. 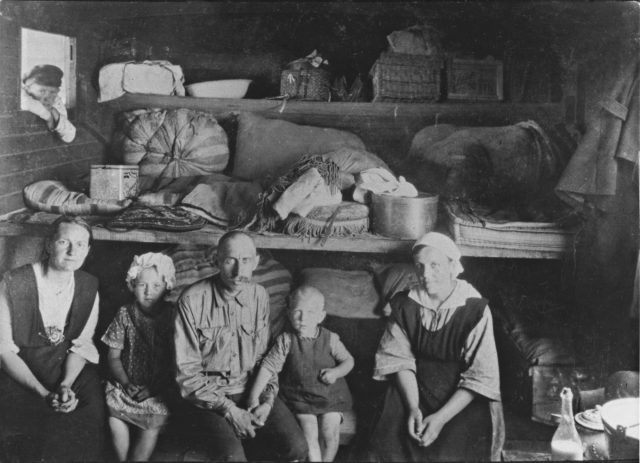 An interior view of a refugee train with a family of Mennonites from Schoenwiese, southern Russia (present-day Ukraine). They are leaving Russia for Canada in 1923. (MCC photo/A.W. Slagel)

Corn meal, dark bread, and warm cocoa. These were the life-saving rations fed to starving families in the MCC relief kitchens run by Jacob and Anna Funk. Carefully measured calories.

The Funks were part of the masses who knew hunger. They had been forced to sell their wedding rings to buy food, sometimes eating meals of roasted gophers or crows. Anna and Jacob said they felt guilty when they received double rations of food. But they knew they needed strength for the strenuous work of overseeing the kitchens.

The following year, MCC began its first development work, shipping 25 Fordson tractors and plows to help farmers plant and harvest new crops. But, for many, this wasn’t enough to secure a future in the region.

It was time to migrate. And so MCC began the work of assisting refugees and immigrants – thousands – to Central America, Canada, and other locations.

The focus on displaced people has been another hallmark of MCC’s work over the past century. Shaped by the biblical call to hospitality and “welcoming the stranger” (Matthew 25:35), MCC has coordinated immigration efforts. We have also worked with communities to provide relief and support for people living in places they don’t call “home.”

Often, this work has led us into the halls of Canadian power. In 1922, the Canadian Mennonite Board of Colonization (CMBC, which later became part of MCC Canada) met with Prime Minister William Lyon Mackenzie King, securing a place for thousands of Mennonites hoping to immigrate to Canada.

At the same time, CMBC negotiated an agreement with the Canadian Pacific Railway (CP Rail) for those families to travel on credit, rather than paying their fares up front. Between 1923–1930, some 20,000 Mennonites came to Canada with the help of CMBC and CP Rail. 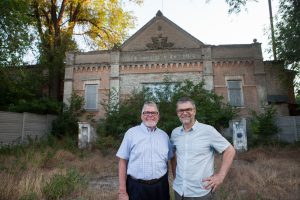 A century later, the work of relief, development, and peace in the name of Christ continues. There is still much to be done. The need to bring Christ’s love and hope to people around the world is as urgent as ever. The number of displaced people has reached record highs, and a cry for bread still rings in the air. The need to work together remains.

In that spirit, we invite you to help us celebrate our centennial. There are opportunities to give a gift – large or small – to help us expand our work with displaced people. There are events, reunions and online communities where you can read more amazing stories, and even share your own MCC story.

Please go to mcccanada.ca/centennial to discover all the ways you can get involved.

is associate director of communications and donor relations for MCC Canada. This is the first article in a series of three which will appear throughout 2020.