What's New
Through the conflict, life carries on in Ukraine
A FOCUS on Mission
Must Patience Be So Slow?
Harold Jantz: A Heart for the Mennonite Story
Lorlie Barkman: A Life of Creative Engagement
Last Days, First Days
Women in Ministry: Bertha Dyck
January Moment in Prayer “Holy Spirit—Fill Us!”
The Church as the Patient Body of Christ
Advent: Making Much of Jesus: Christmas Day
Home News The song remains 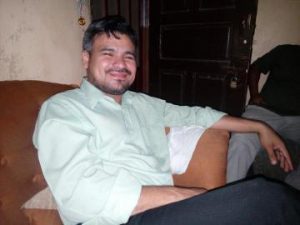 For more than 20 years, gangs clashed in Chamelecón neighbourhood in San Pedro Sula, Honduras. The main street served as an invisible border, marking off the territory of the two dominant gangs. Even for people who weren’t in gangs, it was dangerous to cross the street.

This neighbourhood is home to Vida en Abundancia, a Mennonite church. In 2008, the congregation felt called to start a primary school to shield the children from the influence of gangs. However, the violence continued. Police and gangs fought in front of the school and even once inside the school before classes began. In 2013, threats to the security of the teachers and students was so great that the school had to close. The church accompanied its 38 students in the process of changing to schools outside the community.

In spite of all the fear in the community and reduced size of their own congregation, the church was determined to spread hope. Unable to influence the school anymore, the remaining members went beyond the safety of the church building to carry out activities in all corners of the neighbourhood, making “God-music” stronger than the sound of weapons.

The leader of the gang that controlled the territory heard the song and was drawn to seek out the pastor. With some trepidation, pastor José Fernández presented himself as the one the gang leader was looking for. “No one touches this pastor,” the gang leader instructed his followers. That moment strengthened the church’s resolve. Little by little, young people began to arrive at the church fleeing the horror of that world of violence and resentment.

Hope began to grow again. People began to return. Last year, the school reopened. Adolescents being developed in a mission program also contribute to the community. 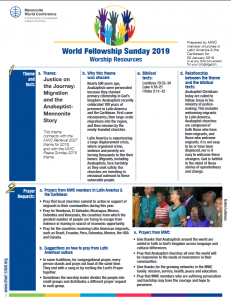 The little church that remained steadfast in spite of hardship is flourishing, trumpeting out a song of hope to drown out the sound of violence.

This testimony is part of the World Fellowship Sunday worship resource for 2017. Click here to see more in English, French, and Spanish: www.mwc-cmm.org/wfs