What's New
A FOCUS on Mission
Must Patience Be So Slow?
Harold Jantz: A Heart for the Mennonite Story
Lorlie Barkman: A Life of Creative Engagement
Last Days, First Days
Women in Ministry: Bertha Dyck
January Moment in Prayer “Holy Spirit—Fill Us!”
The Church as the Patient Body of Christ
Advent: Making Much of Jesus: Christmas Day
Advent: Making Much of Jesus: Fourth Advent
Home Arts & Culture Suspended?

This documentary about Cliff Derksen, the father of a murdered teenager, is surprisingly light-hearted in tone.

There is a remarkable amount of laughter in this film that about a man who has gone through such pain.
Yet, Cliff’s spontaneous chuckles aren’t harsh and cynical but gentle and free.

It’s ironic the film is called “suspended,” for that suggests a kind of captivity that is absent from this story. 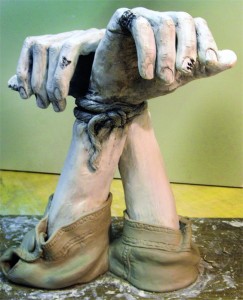 Cliff and Wilma Derksen are local celebrities in Winnipeg. In 1984, their 13-year-old daughter Candace didn’t come home from school one winter’s evening. The whole sleepy, provincial city stirred with fear and speculation.

When Candace’s body was found seven weeks later, the Derksens, steeped in Mennonite teaching, declared they had to forgive whoever did this to her.

Already a budding writer, Wilma soon became a known author and speaker. She penned a book on Candace’s disappearance, started programs to support victims of crimes, and became a public speaker.

More than 20 years later, when advances in DNA evidence made it possible to bring an accused person to trial, the Derksens (already famous not only for their ordeal but their remarkable response to it) were again thrust into the limelight, and again amazed people with their intention – less naïve now, but equally determined – to forgive the perpetrator.

But the film focuses on Cliff’s less-publicized journey.

Although raised in a pragmatic religious community that held art with disdain or suspicion, Cliff could not stem the tide of creativity that flows out of him. So in the decades of processing the horror from which he could not save his daughter, it was through art, not words, that he expressed his journey.

“Is this done now?” someone asked Cliff at the documentary’s film screening.

“We’re in transition,” Cliff answered. He has begun teaching art and creating more regularly. “We’re not slowing down; we’re ramping up.”

The odd thing about the film’s title, and the remarkable thing about Cliff and Wilma that drew their story to the attention of celebrity writer Malcom Gladwell in David and Goliath, is that – despite the 20-plus years of not knowing who killed their daughter and the near-decade of trial, appeal, acquittal – they don’t seem to have gotten stuck.

The Derksens’ stubborn insistence on living out their stated value of forgiveness freed them to keep learning, growing, and serving. 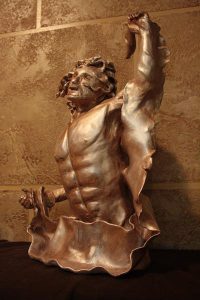 Cliff admits there was a period when the forgiveness began to slip away and anger insidiously took its place.

Imagination – that “devil’s playground” in the Mennonite upbringing that incubated the gift of forgiveness – turned out to be a divine key to releasing the burden of anger.

In the process, he discovered an unexpected gift. Confronting the ugliness in his own heart opened a door to understand how someone could do a terrible thing.
“Faith is the core” of their ability to forgive, Cliff and Wilma assert. But art – visual for him, verbal for her – is the tool that allowed them both to not only survive but thrive after such a devastating tragedy.

And humour. That genuine mirth that bubbles out of both of them. There’s a hard-won serenity that emanates from Cliff and Wilma, even through the screen.

Suspended? Not in the sense of being frozen or rootless, but unencumbered and floating. Cliff and Wilma are a testament that forgiveness frees.

Suspended is a production of Refuge 31 Films, available on Bell MTS’s Stories from Home.