What's New
Tibetans in the Neighbourhood
MCC BC and MDS Flood Response and Partnership
Resilient Leadership: Praying against burnout
Boldly advancing the gospel from our knees
MCC sends food and relief to Cubans in...
Robert Dagenais, pastor of the Sainte-Thérèse church, is...
More donated hay needed to help farmers in...
“God’s time was perfect”
Hope and pray every day
Resilient Leadership: The gift of self care
Home Arts & Culture Christ light pierces tragedy’s darkness 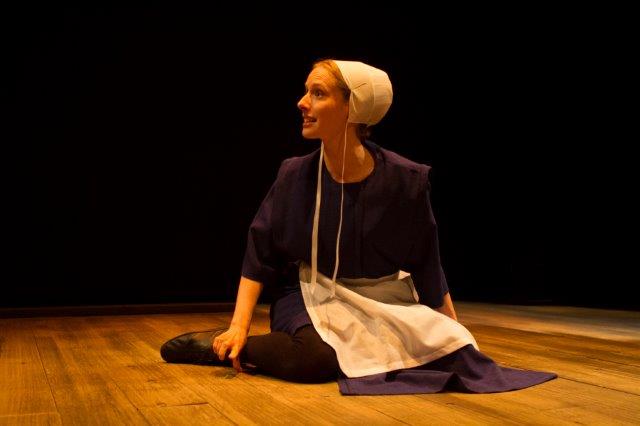 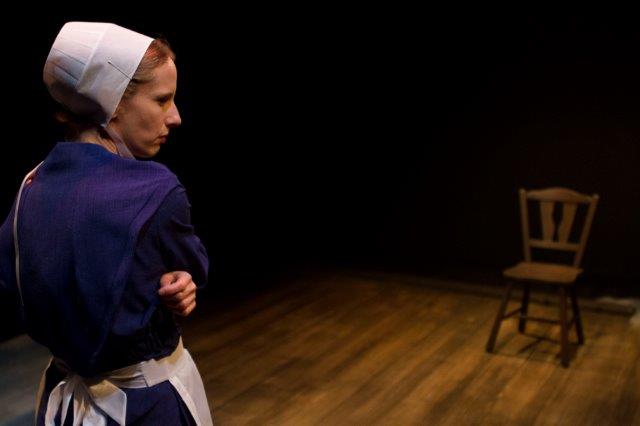 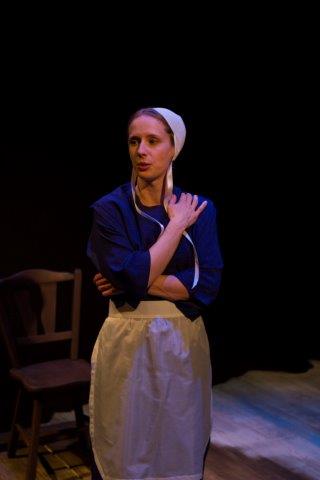 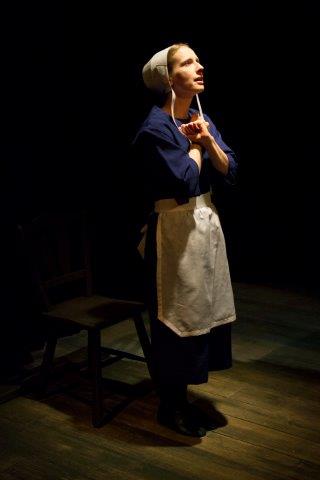 There are some unspeakable tragedies from which we want to hide our faces: 10 Amish school girls shot execution style in a hostage situation by a gunman wanting to molest them while their helpless families gather outside. It’s a parent’s worst nightmare. But, don’t close your eyes or you will miss what else is going on.

The Amish Project, now playing at Pacific Theatre, is worth one’s time and emotional investment. Bleeding Heart Theatre Productions, in association with Pacific Theatre, presents a raw telling of the school massacre at Nickel Mines, Pa., in an Amish schoolroom in October 2006. The play explores the lavish forgiveness the Amish extended to the murderer and his family, making national news in the aftermath of the tragic incident.

Playwright Jessica Dickey begins the single-cast-member production with the victims’ deaths. The girls’ souls fly freely over the school and farms below, then return to tell the story from the beginning. A man enters a school room with three guns, shots are fired, 10 girls fall.

The story begins with spiritual peace in the great beyond making Amish faith central to the story. The writer brilliantly uses a mystical perspective in her storytelling.

In particular, the audience accesses the themes of forgiveness, meekness, and not holding a grudge through the eyes of young Velda. Her simple telling of the meaning of the cross underscores that Jesus is the power of forgiveness at work within the meek and forgiving Amish people.

The Amish Project is a fictional portrayal. Dickey takes her creative license to write “an unflinching play.” Each character actor Susie Coodin interprets moves the action toward the heart of the real events and the spirit of forgiveness. Dickey writes with tenderness toward the characters. Her lyrical repetition of dialogue is effective, her manipulation of time and place, gorgeous.

The writer weaves a tapestry; the audience follows threads of redemption, sin and brokenness, strong and beautiful forgiveness, and light in the sometimes engulfing darkness. As the unimaginable tragedy unfolds, the audience already knows the victims are at peace in the afterlife and that forgiveness is extended. This big picture perspective is comforting.

The series of interlocking monologues like puzzle pieces show the characters’ interaction with the events and each other in the present, past and afterlife. Their personal experience and brokenness creates rich and diverse perspectives.

Coodin embodies seven vastly different characters with exuberance and joy. She deftly exchanges one character’s set of gestures and postures for another. Her characterizations are usually consistent and convincing and always entirely enjoyable to watch. Her unearthly radiance as the innocent child Velda is her most moving portrayal.

Director Evan Frayne’s use of space is as striking and simple as the set of the schoolroom is bare, wooden and devastatingly hollow. The way he layers the stories with the physical space causes the audience to have a growing sense of intimacy as the story explores the beauty of goodness in the midst of devastation and human brokenness. Grief and loss hit deep.

Yet, the experience is not unbearable; the play moves quickly toward climax and catharsis, leaving the playgoer strangely relieved and enriched by glimpses of glory, beauty and light. The play approaches its climax in an uncommon 60 minutes without an intermission.

Jesus is the power of forgiveness at work within the meek and forgiving Amish people.

As the intensity increases, the pace of character switches quickens and the sound design adds to the suspense. Sound designer James Coomber’s symphonic music creates mood and suspense throughout. The use of cacophony through a clawing, high-pitched tone at the climax of the attack was disturbing and effective yet somewhat disorienting.

Movement coach Wendy Gorling’s lyrical choreography around the perimeter of the stage and the characters’ growing physicality throughout creates a sense of something being woven, as if Truth is crystallizing somewhere in the atmosphere above the centre of the stage.

The set, bare except for a simple wooden chair, fits both the fallen condition of humanity this side of Eden and the simple lifestyle of the Amish people in Lancaster County, Pa. Two broken off wooden sections of the school house floor suspended above the playing space speak of the departing souls of the victims and symbolize the lives and faith of their families who transcend the brokenness of this world while their bodies are still tethered here.

Set designer Carolyn Rapanos’ profoundly symbolic design is most beautifully rendered when Velda draws in the air with her finger: Jesus at his crucifixion with nails in his hands and thorns on his head. The image of the wooden cross added to the wooden pieces of the unfinished puzzle represent mystery. Rapanos’ creative design whispers of the heavenly, beyond-this-world vision and faith needed to embrace forgiveness amid such profound tragedy.

Costume designer Jacqueline Firkins’ simple, modest, traditional dress, pinafore and bonnet keep the Amish culture central in the storytelling. As Coodin embodies each character with different gestures, voices and postures – in particular, the hunched over, heavily laden posture of the murderer – the Amish costume is an unnerving and effective juxtaposition. The Amish girls’ modest, innocent, feminine purity contrasts with the murderer’s fantasies of molesting them.

The Amish Project captures glimpses of blinding truth in theatrical moments. For instance, in an intermingling of two perspectives of the same scene, the gunman’s widow, deeply affected by the forgiveness of an Amish father of two victims, stands forlorn on the road outside the home of Velda’s parents. The confused yet curious widow is amazed by the Amish farmer’s concern for her family’s grief. Through the farmhouse window, she sees a father whose forgiveness she does not deserve or expect and whose generosity gives her strange and unnerving hope and strength. She aches for his kind of peace. Yet, inside the home, a murdered daughter describes another side: her dad crumpled over the kitchen table. The first to express forgiveness, her father is distraught and grief-stricken, bent over in pain, crying out to his Father in heaven in anguish.

Dickey weaves these threads from different character’s perspectives to show that forgiveness is not cheap mercy, nor religious pretension; this father does not minimize his loss nor say the events were okay. His choice to forgive is in keeping with New Testament Christianity and the Anabaptist history of meekness, nonviolence and even martyrdom in the face of persecution. The monologues clearly portray the characters’ dependence on God while walking through tremendous grief and loss. The decision to forgive was immediate and final; the process of healing was ongoing and painful. Yet it caused a ripple effect in the larger community.

In the Amish response to this tragedy, there is a glimpse of light shining in the darkness. God must be here. Could it be that only God within people could create such a response of lavish forgiveness in the face of the worst imaginable loss?

Earlier in the drama, through another character’s retelling, the same Amish father of two victims explains that in choosing vengeance he would have been overcome by darkness. Lighting designer Jonathan Kim uses subtle lighting changes throughout the play’s action to portray the glimmers of hope. At the close, there is utter darkness when the gunshot that kills Velda is fired. Then, a brilliant light shines on Velda. “Do you see him?” she asks. “He is here!”

In the woven tapestry of perspectives, Velda is fully open to spiritual reality. She can see that God is and always has been with her, protecting her not from death itself (which is not the final end in this story) but from unforgiveness, fear and being overcome by evil. She sees him there. Do we?