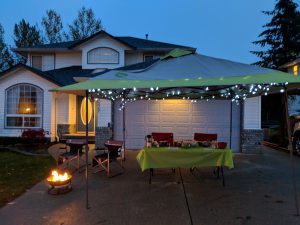 “By being in church every October 31, I’ve missed a really good opportunity to encourage our neighbourhood,” says Leonard Klassen.

But this year, the co-lead pastor says, “God opened our eyes to a different possibility.”

Surrounded by farmland, the church building doesn’t have a neighbourhood – but its people do, so why not encourage members to be out in their front yards on the one night their whole community is wanting to interact?

Dubbed Fall Extravaganza – Neighbourhood Edition, the night’s purpose, to shine Jesus’ light as a congregation, was consistent; all that changed was where that light would reach.

King Road’s leaders provided church business cards, flyers listing their children’s ministries, and bookmarks describing how to accept Christ as tools to use in relationship; then invited their members to go home and turn on the lights.

Taking the carnival on the road 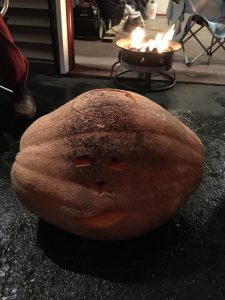 Youth pastor Edgar Wiens partnered with a church family from the country to bring a bit of the farm into his city yard. Farmer David Funk brought a huge pumpkin with baby rabbits nesting inside, delighting both adults and children.

Some families who normally volunteer at Fall Extravaganza hosted a mini carnival at the home of Silvia and Phil Funk, complete with hotdog roast, hayride, balloon darts, bowling, face painting, and puck shoot.

“I felt blessed by the number of families that reached out to help,” says Silvia.

The group invited the families from King Road’s girls/boys club and the neighbourhood around the Funks’ home. Most of the children who came were those who attend club but aren’t otherwise connected to the church.

While the 45 children played games, the adults conversed in a way they couldn’t have in a noisy church building. “Moving it offsite got people interacting who normally wouldn’t,” says Klassen.

The college and career group set up a tent, barbecue, and dunk tank in one of their member’s yards. The next-door neighbour in his 20s was sent to watch over them, his family fearing that the young adults would be rowdy. By the end of the evening, “his mom or grandma made chai tea for the whole group,” says Aaron Bartlett, associate pastor of young adults.

“I was able to talk about faith with him and he shared a bit about growing up in a Sikh family,” says Bartlett. “I gave him a Gospel of John, which he happily accepted.”

While children enjoyed the dunk tank, Bartlett made plans with the parents: “Around Christmas time, we’ll be partnering with them to give care packages to people experiencing homelessness.”

“We made some connections which we feel were significant,” says Bartlett. “God was glorified as we took a step of faith to be hands-on in the neighbourhood.”

At their own bonfire and hot chocolate table, the Klassens met about 75 children. 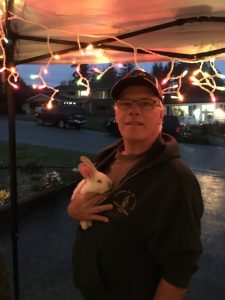 Some Fall Extravaganza regulars – many of them from nearby churches – expressed disappointment that there would be no event in King Road’s facility. While he appreciates their desire for safe family entertainment, Klassen says, “what drives us is reaching into our community with the gospel of Jesus.”

“We need to not fear trying new things,” he says.

“For too long, we as leaders have been content with status quo,” says Klassen. “The conversation this stirred up in our congregation about why we do what we do was itself a success.”

King Road’s pastors are thinking ahead to ways of encouraging the congregation to continue in hospitality: cross the street when Abbotsford’s annual major snowfall sends everyone outside with shovels; deliver Christmas baking; start with simply saying hello. Looking to next summer, they’re asking, “What would it look like if we would sponsor block barbecues?”

“People need to know there’s someone out there who cares.”