What's New
Through the conflict, life carries on in Ukraine
A FOCUS on Mission
Must Patience Be So Slow?
Harold Jantz: A Heart for the Mennonite Story
Lorlie Barkman: A Life of Creative Engagement
Last Days, First Days
Women in Ministry: Bertha Dyck
January Moment in Prayer “Holy Spirit—Fill Us!”
The Church as the Patient Body of Christ
Advent: Making Much of Jesus: Christmas Day
Home News Rooted in community 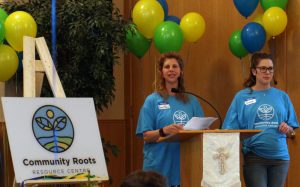 “If an alien ship were to come take our church away, would anyone notice?”

This is the question that members of Jubilee Mennonite Church asked themselves more than a decade ago. When they realized the answer might be no, they dedicated themselves to being an active presence in their community.

Fast–forward to today, and the rich connections the church has made over the years have culminated in the official launch of the Community Roots Resource Centre.

On May 22, 2019, more than 100 people gathered at Jubilee, where the resource centre is located, to celebrate how much has already been done and the opportunities that still lie ahead.

Face-painted children ran around the church, which had a long table laden with food and was filled with the energetic music of Motherfunk, a local band. 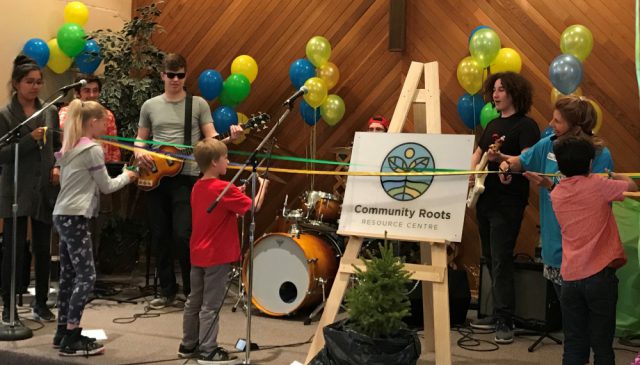 The ribbon cutting marked the official launch of the Community Roots Resource Centre, which has been more than a decade in the making. Photo by Nicolien Klassen-Wiebe

“Community Roots is Jubilee’s response to loving our neighbour, caring for the least of these, and being rooted in this neighbourhood and grounded in God’s love,” says Anna Marie Geddert, community minister at Jubilee and one of the three provisional directors of Community Roots.

Jubilee Mennonite is a congregation of about 80 members, located in Winnipeg’s North Kildonan neighbourhood. It is part of both the Mennonite Brethren Church of Manitoba and Mennonite Church Manitoba.

For years, the church offered extensive community programming, but as it continued to introduce new initiatives and more people began participating in them, the church soon realized its small congregation didn’t have enough people or resources to run what was becoming a full-fledged resource centre. 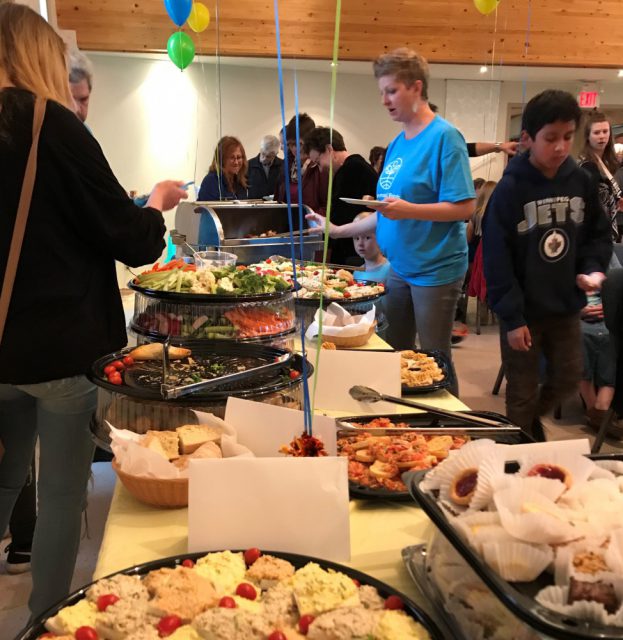 More than 100 people gathered at Jubilee Mennonite Church in Winnipeg for the launch of the Community Roots Resource Centre. Photo: Nicolien Klassen Wiebe

The City of Winnipeg, Winnipeg Regional Health Authority, Manitoba Housing, and members of the community, among others, have since joined this cooperative project. Community Roots became incorporated in January 2018 and is in the process of applying for charitable status.

“This community is the lowest–income community in all of North Kildonan,” Geddert says. Newcomer, Indigenous, and single–parent families make up the largest percentage of those who use the resource centre. Community Roots runs a community kitchen and nutrition education, clothing wardrobe, emergency food pantry, sports activities with provided equipment, and community garden, to name a few.

A survey the resource centre conducted found that even more than material resources, people in the community yearned for a place to belong, says Wally Hassenrueck, another provisional director of Community Roots who has been involved in the centre for nine years.

J-Club, the family drop-in program that accommodates up to 40 children, and Neighbourhood Grounds, a time of coffee and conversation, give people a safe place to spend time with others.

“We have noticed ties being made between people in the community because of coming to this,” Hassenrueck says.

“I think the world would change if we could all just love our neighbour,” Geddert says. “So, I think community ministry is a way that we can be examples of love to our neighbours…. Relationship building is the most important thing, and sometimes I think we forget about that.”

Mary Funk has been a member of Jubilee since its inception and has been involved in Community Roots since the beginning, when she and Geddert talked about starting a community kitchen.

“It just seems like the right thing to do,” she says. “These are our neighbours, these are people that we see across our yard all the time.”

Funk started organizing childcare for the parents who came to community kitchen and soon became more involved with the cooking education. She also began teaching people to crochet and make crafts that they could then sell to buy toys for their children.

As she showed off the fire pit at the launch, where people from the area gather to hang out, the kids playing outside greeted her and she greeted them back by name.

Funk says that other churches sometimes ask how many members Jubilee has, or whether it’s growing. “And I say, ‘Well, do you mean how many come on Sunday morning or how many come through the building during the week?’ They may not be regular baptized members that come to worship here… but you’d ask a lot of these people here and they would say this is their church.”

Geddert emphasizes that Community Roots is not just Jubilee’s project. It has volunteers from Douglas Mennonite Church, River East Church, North Kildonan Mennonite Brethren, and others, and it is always looking for more churches and organizations to partner with.

“I think, when you look at Jesus, Jesus was out in the community, Jesus was walking in the neighbourhood, Jesus was getting to know the people who were outcasts,” she says. “And so with community ministry, it’s about connecting with the neighbours.”

is Manitoba Correspondent for Canadian Mennonite, where this story first appeared. Reprinted with permission.

Chatting about God over the airwaves