What's New
A FOCUS on Mission
Must Patience Be So Slow?
Harold Jantz: A Heart for the Mennonite Story
Lorlie Barkman: A Life of Creative Engagement
Last Days, First Days
Women in Ministry: Bertha Dyck
January Moment in Prayer “Holy Spirit—Fill Us!”
The Church as the Patient Body of Christ
Advent: Making Much of Jesus: Christmas Day
Advent: Making Much of Jesus: Fourth Advent
Home News Memories of faith-filled father kept evergreen 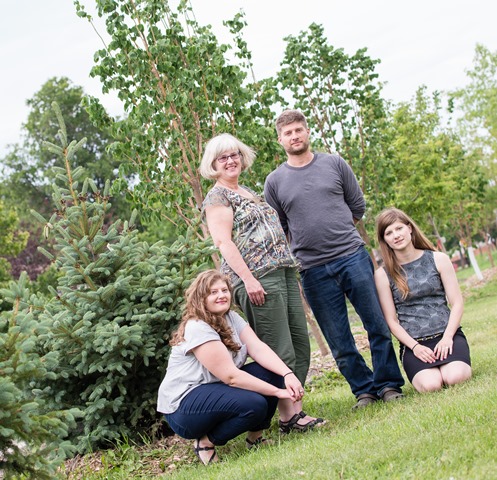 Since Eric Schmidt’s death to kidney cancer, Jan. 31, 2009, his family has wanted to plant a tree in his memory.

“Every vacation, we’d have to stop to see big trees, strange trees, take pictures of Eric beside trees,” says wife Anne. “In his funeral slideshow, there was a whole section about trees.”

Schmidt was one of 12 Jubilee Mennonite Church attenders memorialized in a tree planting ceremony, May 24, 2014. 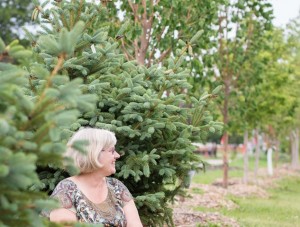 Anne with Eric’s spruce in line with other memorial trees.

Eric served both congregations as treasurer. “He was a laid back guy who could drive you crazy because ‘everything was going to be okay,’” says Anne.

When the church had big ideas, he’d say, “We can do it and figure out how to get money later. Ministry is important.”

Eric also actively demonstrated his faith at Living Bible Explorers, an inner-city youth mission, from its beginnings in the early 1970s until his death at age 57: running camps, serving on the board, leading boys’ clubs, driving bus. “He had a gift for enjoying the noisy chaos and not letting it get to him,” says Anne.

Jubilee’s Edd Funk applied for a Manitoba Hydro grant to purchase the trees. “It was an opportunity to remember people who’ve passed on, to meet their families and to reconnect with past members,” says Edd’s wife Mary, who helped organize the event. Pastor Dan Nighswander prayed a dedication prayer, and the families shared memories. 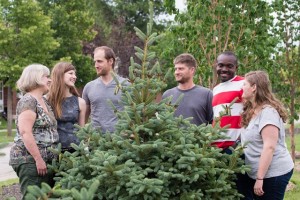 Mary says, “The atmosphere was both solemn and joyful.” The Schmidt family chose a spruce, which holds happy holiday memories with their husband and father. “We always had a real Christmas tree, usually a spruce the neighbour cut from his ditch,” says Anne.