What's New
Through the conflict, life carries on in Ukraine
A FOCUS on Mission
Must Patience Be So Slow?
Harold Jantz: A Heart for the Mennonite Story
Lorlie Barkman: A Life of Creative Engagement
Last Days, First Days
Women in Ministry: Bertha Dyck
January Moment in Prayer “Holy Spirit—Fill Us!”
The Church as the Patient Body of Christ
Advent: Making Much of Jesus: Christmas Day
Home Life & Faithfeature articles From suburban foster child to inner city “tomato stick”: A Métis man’s story 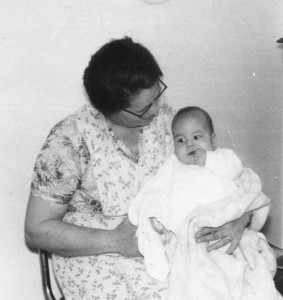 Mervin Scott joins the Loewen family as a baby.

My mother, a Cree woman, was born at the Jackhead Reserve, just north of Hodgson, Manitoba, in 1941. She lived with relatives at Fisher River, then went back to live with her mother at the Hollow Creek Reserve near Bissett at the age of 13. She went to a residential school at Fort Alexander for a while and then lived with her grandmother.

At 16, she moved to Winnipeg to look for a job but she had a lot of difficulty because she did not have much education. Here she met my father, who was of French origin and had lived for some time in New Brunswick. He was a gunner in the Canadian Army for five years and had a good record.

As a result of this relationship, I was born on November 15, 1956. My mother wanted to keep me but felt she could not provide a good home for me because of her own problems. She asked the Children’s Aid Society of Winnipeg to find a good home and nice parents to look after me. My mother lived in Portage La Prairie, Manitoba, for a few years after my birth and frequently wrote letters to the Children’s Aid Society to find out how I was doing. Her love and interest in me were illustrated in those letters.

In the spring of 1957, the Henry and Mary Loewen family heard a radio commercial from the Children’s Aid Society of Winnipeg about the need for homes for babies. The Loewen children were excited about this idea and had even remembered the phone number given out on the radio. They thought this was what the family should do but it was their father who would have the final say on this decision.

His decision was yes. If he could provide a home for a child that had no home, he wanted to do it. He himself had been a foster child in Russia during World War I. After about two weeks and a very intense check of the Loewen home and family by the health department, I arrived on April 30, 1957. Amazing, a Métis newborn arriving in a Mennonite home.

My foster parents had originally immigrated to Canada from Russia. When I arrived, they already had three children of their own – two teenaged girls, Martha and Adeline, and an eight-year-old boy, Victor. My birth mother’s love for me was demonstrated in her willingness to have my religion changed from Roman Catholic to Protestant in order for me to remain with the Loewen family.

I lived my childhood years as a person of Métis descent in a predominantly white suburban community. Looking back, they seem typical childhood years. I got to know new uncles, aunts, and many cousins, I attended the local Mennonite Brethren church, I played with numerous neighbourhood friends, I went to school.

It was also during my childhood, in 1967, that I accompanied my foster mother to a Billy Graham crusade being held in Winnipeg. The famous evangelist encouraged those who wanted to know the Saviour to “come, just as you are.”
Well, I made my way forward, and I accepted Jesus as my personal Saviour.

The Loewens also opened their home to other foster children. There were 11 foster children in total, ranging from ages one to five, living with them at various times. However, I was the first and the last to remain.  The Loewen family is the only family I have known.

I must have had the Lord looking after me during my junior and high school years. I spent junior high at the Mennonite Brethren Collegiate Institute, a private school. It was there that I came to really enjoy sports. The physical education teacher took me under his wing and encouraged me not only to enjoy sports but academics as well. This teacher was also the high school’s basketball coach and I decided to one day become a basketball coach, and to coach as he did.

I went to public high school, where I continued my involvement with basketball. Here too I was encouraged by the coach and one of my teachers to enjoy basketball and get an education as well. My foster parents were quite proud when I graduated from high school.

In 1978, I was baptized and became a member of McIvor Avenue MB Church, the church I attended with my foster parents. I met Jo-Anne, my future wife, there and we married in 1983. We fellowshipped in this church. We had a son, and some years later, a daughter. I volunteered for a time with a local ministry to teens, in a Big Brother-type of program. I felt that, being a Métis person, I had something to contribute to a young person’s life. 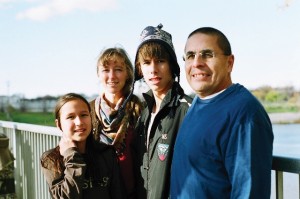 Mervin Scott with his family today.

One evening, on my way home from an inter-denominational mission conference, I heard what I believe was the Lord’s audible voice speaking to me. He told me that he was doing things with Native people in Winnipeg and that I might want to join him. I began to volunteer with an inner-city children’s and teens ministry, in which I continue to be active to this day.

This experience has awakened me to depths that are hard to put into words. I’ll just say that it’s one thing to read about Native families and their struggles and another thing to actually get involved proactively in the lives of Native families.

After getting to know a Native grandmother and her grandchildren, I wanted to take them to church with us but I could not see them fitting in at a suburban church. My wife and I left the McIvor church with the blessing of the congregation and pastor and began attending a Vineyard church that had been launched in Winnipeg’s inner city.

Whenever I do any type of ministry work, I liken myself to a “tomato stick.” When a young tomato plant is planted, a stick is secured into the ground to help support the tomato plant as it continues its growth and becomes strong. If Winnipeg is really the largest Aboriginal urban centre in Canada, then I say we really need a lot more “tomato sticks” in this city.

I treasure the verse, “Because of his love he had already decided to adopt us through Jesus Christ” (Ephesians 1:5, God’s Word Translation). I can say with assurance that the Lord has taken care of me through my entire life. He placed me into a home with loving parents and loving siblings. He has blessed me with a loving wife and two wonderful children.

What more can be said than: praise be to God from whom all blessings flow.

—Mervin Scott lives in Winnipeg with Jo-Anne and their two children, Nathan and Miriam. He works as an architectural technologist and serves on the board of Living Bible Explorers and in ministry with the Winnipeg Centre Vineyard Church. He coaches basketball at The King’s School.
Aboriginal neighbourscoachingFirst Nationsfoster childLiving Bible ExplorersMcIvor Avenue MB ChurchMervin ScottMétis
0 comment

Coaching helps young moms get on their feet