What's New
A FOCUS on Mission
Must Patience Be So Slow?
Harold Jantz: A Heart for the Mennonite Story
Lorlie Barkman: A Life of Creative Engagement
Last Days, First Days
Women in Ministry: Bertha Dyck
January Moment in Prayer “Holy Spirit—Fill Us!”
The Church as the Patient Body of Christ
Advent: Making Much of Jesus: Christmas Day
Advent: Making Much of Jesus: Fourth Advent
Home MB HeraldFeatures L2L shaped churches and leaders

“I’m a leader, therefore I need to learn how to be a better one.” A young pastor taking on a senior pastor role, Jason Dyck turned to L2L and found the resources and training he needed to take his leadership to another level.

L2L, the leadership development arm of the Canadian Conference of MB Churches, closed at the end of 2017, a casualty of a $1.3 million budget reduction. Interim director Daniel Beutler and ministry associates Dave Jackson, Teresa Born, and Alain Després were released. Leadership development ministry now rests with provincial conferences and schools.

In 2012, Ron Toews was appointed to oversee church ministries and create a responsive process to develop healthy and effective leaders in churches of all sizes. First called Resourcing Churches, Developing Leaders, L2L rolled out coaching for individual leaders and churches. A website launched in 2014 served as a portal to text resources, peer discussion groups, and coaching relationships. 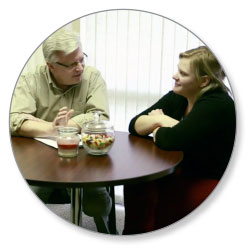 L2L also offered ReFocusing ministry and developed expertise in transitional pastoral leadership. “We had the joy of engaging with smaller churches in little known places and found Jesus there,” says Jackson.

“Dave was deeply insightful of what was really going on,” says pastor Marvin Dyck. Jackson’s advice was gentle, direct, and tailored to the needs of Crossroads MB Church, Winnipeg. The small congregation undertook ReFocusing in 2006 and followed through with subsequent consultations in 2011, 2013 and 2016.

“What I really loved was how they invested in me in a tangible way,” says Jason Dyck. Taking advantage of denominational training opportunities, he landed in an L2L workshop where he was encouraged to develop further. L2L gave him the opportunity to be intensively trained in the COACH model and to become a trainer himself. 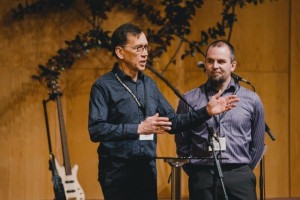 “That investment L2L made in me is paying forward with MB Mission,” says Dyck, who now facilitates training events for MB Mission.

He hopes to see the coaching culture L2L fostered in Canadian MB churches grow. “The Holy Spirit is alive and at work in every Christian; our job is to help that person see how.”