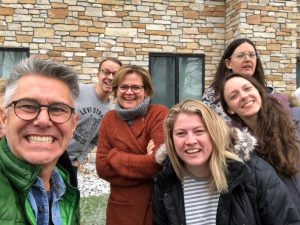 “We can’t outsource leadership development,” says Ewald Unruh, a church planting coach with Multiply. “It belongs in the local church.”

In June 2019, Multiply – the mission agency formed after the 2018 merger of MB Mission and C2C Network – released its interdenominational North American church planting component in response to a $1.5 million deficit. Mennonite Brethren church plants (previously supported by C2C/Multiply) are now under the provincial MB conferences.

Multiply also moved the remainder of their short-term mission (STM) staff in North America to the relational funding model. STM mobilizers – who previously had their salaries and expense accounts guaranteed through general donations to Multiply – are now raising their own support, as though they were missionaries in their home countries.

Many STM mobilizer expenses are travel related; for example, each year, Carol visits one international mission site, one national conference, and at least two meetings each in Alberta and Saskatchewan. She also raises funds for bursaries for STM participants unable to raise their costs on their own.

The process of moving Multiply’s STM program under the relational funding model to address the program’s growth and support needs began years ago with STM coordinators, interns, and apprentices raising support for their salaries. Since June 2019, the 12 Canadian staff in these roles are responsible to fundraise their ministry expenses as well.

Administrative staff and the regional mobilizers (e.g., Lloyd Letkeman in Manitoba, Robyn Serez in Ontario, and Greg Laing in B.C., who focus on strengthening church partnership with global projects) will continue to be paid through Multiply’s essential services.

Since 2006, all international workers with Multiply have been responsible for raising their own support.

With the de-merger, responsibility for the MB church plants C2C and Multiply started in Canada has now moved to the provincial MB conferences (with CCMBC continuing to have these churches under its charitable status).

Their role is to coach or arrange coaches for church planters, consult with provincial MB leaders and pastors, and serve on task forces (external boards) for church plants as necessary. (Toews and Unruh’s positions have also come under the relational funding model.)

“The desire has always been to plant each new church in concert with provincial denominational leaders,” says Unruh. “With the merger and its dissolution, that relationship has strengthened.”

Although it was painful, good is coming out of the de-merger as well: “As Multiply embraced a mission ‘from everywhere to everywhere,’ newcomer church planters in Canada felt a stronger connection to Mennonite Brethren,” says Unruh. “And
there is more dialogue now between their work here and mission work in their home countries. We hope that will continue.”

Coming back to the churches

Church planting ministry is coming back to the churches and provincial conferences. “There’s a review of what church planting is about,” says Unruh, “that is: prayer, renewal, disciple making, raising up leaders, then church planting, rather than starting with church planting and reverse engineering these things.”

“The big emphasis that came out of the de-merger is that we are a family-rooted mission,” says Lloyd Letkeman. With the new Collaborative Model adopted by MB partners across Canada, Multiply has been meeting with provincial conferences and MB Seminary about how to work together more closely.

“Through the new National Ministry Team, which links provinces and agencies into a unified ministry strategy, for the first time, our global mission work is represented at the national strategy table,” says Friesen.

“Instead of us primarily providing short-term mission programs and inviting churches to join us,” says Lloyd Letkeman,  “we’re asking, ‘As a family, what do you need; what programs do we want to do together?’”

WHEW! This sounds like the national/international corporate re-organizing strategy meetings I used to attend in the business world.