What's New
A FOCUS on Mission
Must Patience Be So Slow?
Harold Jantz: A Heart for the Mennonite Story
Lorlie Barkman: A Life of Creative Engagement
Last Days, First Days
Women in Ministry: Bertha Dyck
January Moment in Prayer “Holy Spirit—Fill Us!”
The Church as the Patient Body of Christ
Advent: Making Much of Jesus: Christmas Day
Advent: Making Much of Jesus: Fourth Advent
Home News Making space – spreading wings 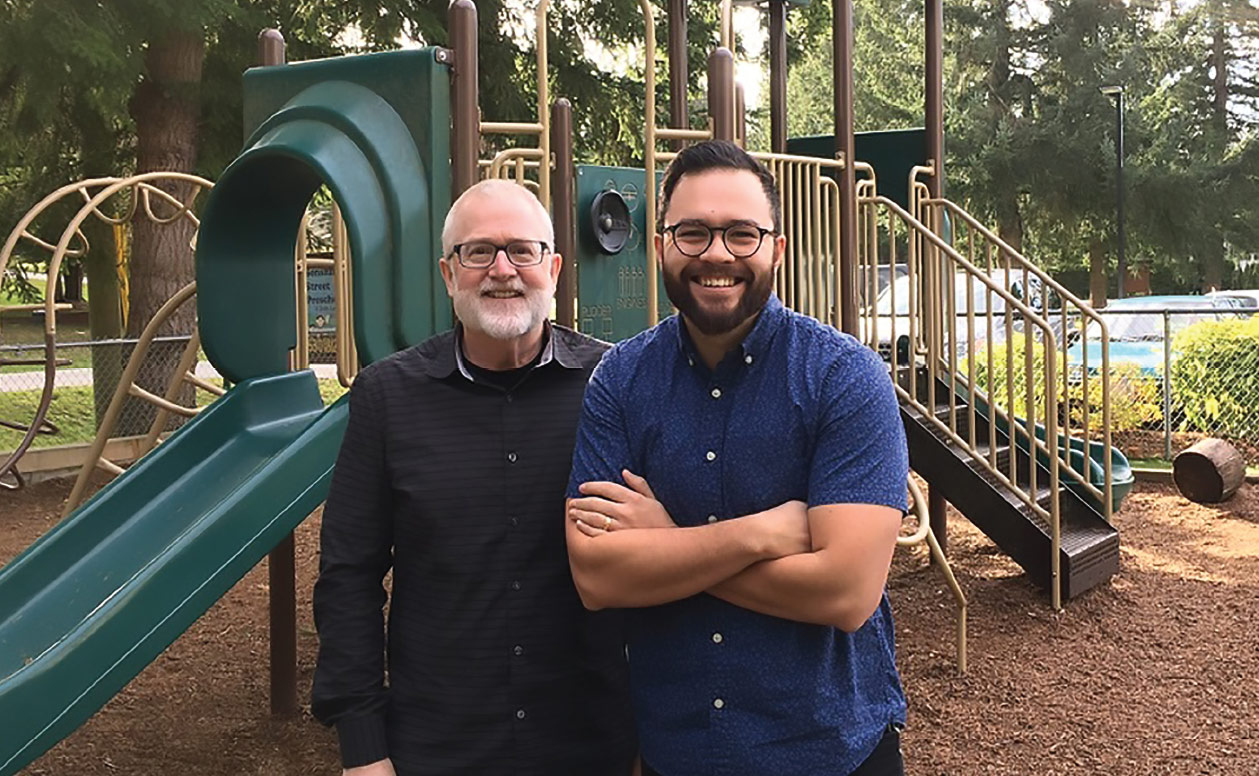 After 20 years as lead pastor of South Langley Church (SLC), Wes Dahl felt it was nearing time for him to resign. But he knew of churches that had not fared well after long-serving lead pastors resigned. He wondered: was there a healthier way of transitioning?

Tell us how your leadership transition came about.

Wes: I had always hoped for an internal transition of leadership. In July 2016, then-moderator Randy Wollf proposed a season of co-leading the church with then-associate pastor Dave Navarro. The idea was processed by church council in September and brought to our congregationally led church in October. I agreed to co-lead until the end of 2018.

Dave: A lead pastor role was my career destination, given my giftings and passions, but I was 29 years old: I wasn’t ready for a lead pastor role – and I knew it. The co-lead model was a huge encouragement and an opportunity to try a lead role with a seasoned co-pilot whom I trust.

We were clear that moving to co-lead didn’t mean I would automatically become the lead pastor when Wes resigned, but I could candidate for that position. I did so, and in September 2018, the congregation called me to the role. Wes finished Dec. 31, and Jan. 1, 2019, I began as lead pastor.

Wes and Doreen stayed at SLC as members. After a few months away (so people would get used to his absence), Wes returned to serve as a “civilian.” In fact, he preached last month.

What support did Wes offer during the co-lead period?

Dave: Wes really let me run with the ball. We did some re-focusing and vision work as a church, and Wes encouraged me to be hands-on about guiding the process.

I made some missteps along the way that I’m sure Wes saw coming. But he let me find my way without micromanaging. Wes shared lots of wisdom during our weekly co-lead pastors’ meetings. And he put his support behind me publicly, so that people who trusted him could see that he trusted me.

What were the positive aspects of the process?

Wes: The biggest positive for me was continuity. Dave understood the culture and ethos of the community.
When we began the co-lead model, we were able to divide up the workload according to our giftings and abilities. Being able to share the responsibilities with Dave was a huge plus. I had renewed energy to keep going.

Dave: I was thrilled to continue the relationships and momentum I’d built at SLC, while moving forward in my vocation. I got to make an initial foray into a lead role at a young age, with a safety net and mentor.

Wes: Though the workload was shared, the burden of responsibility was still there. When you have led and loved a people for 20 years, the weight of that stays with you.

Dave: There were some reality checks. I was optimistic about ideas I had. But some things that work well in theory are less effective when you bring in the human component.

We had to be very clear about how the process was unfolding. Because this was the first time the congregation had done a co-lead arrangement, we were adapting the way we did due process and followed our bylaws. We put a lot of effort into communicating that.

How was the wider church included in this process?

Wes: We needed the church’s support for the co-lead model to work. Not everyone believed this was the way forward. At the end of our two years, the church still had to decide if Dave would be their lead pastor. A team monitored and guided us through the two years.

Dave: Since this team was tasked with listening to the church, the church’s involvement was giving feedback. This was an ongoing, informal conversation, and at key transition points, we invited more structured feedback.

Wes, what in your training, experience, or worldview empowers you to make room for other leaders?

Wes: When God called me to pastoral ministry, I was the most unlikely person. I had to trust him for everything. Nothing came naturally. Out of my weakness, God has done more than I could possibly ask or imagine. Because of this, I have always been open to sharing leadership. I have looked for people who can help accomplish the mission of the church: to help people know and follow Jesus.

Dave is a person with great gifts. He feels called by God to serve the church. It was easy to say yes to co-leading with him. It wasn’t about position or power; it was about serving the church together.

You have to show initiative so people know you are willing to serve.

And the church should always be looking for people to affirm. In my early 20s, I had the opportunity to be a summer camp director. It was so encouraging to have someone say they believed in me.

Dave: In Acts, you see both models playing out. There are big advantages to raising up leaders from within. Churches can move forward by hiring talented staff from outside, but there’s something right about moving forward together, long-term, relationally, as a team.

Why is it important to be intentional about making space for people to step into leadership?

Dave: I’ve often seen potential leaders shy away from leadership because they were intimidated by the shiny, perfect environment. They didn’t feel good enough; they felt they would be judged if they fell short. I benefitted from the freedom to try things and fail in a supportive environment. I’ve tried to maintain that environment, now that several staff are even younger than me. Making space is a good way to phrase it.

What is your advice for how other church leaders can transition well?

Wes: It’s such a gift to the church when the older generation is willing to give the younger generation the support and encouragement they need to lead. Yes, they will do it differently. We may not always like it. But it is not about us. It’s about God’s church and his kingdom coming to earth as it is in heaven.

Dave: Community matters – precisely because a leadership transition means methodological shifts. If the only thing holding us together is that we like the same worship and preaching style, then we’ll fall apart at any transition point. But if we’re bound together as brothers and sisters, we stay committed to each other.