Reconciliation is not achieved with the signing of an agreement, the celebration of an event or the release of a documentary film. But all are “steps on the journey,” says filmmaker and Canadian Mennonite University alumnus Brad Leitch (nee Langendoen).

His documentary Reserve 107, screened at CMU’s fall fest alongside a panel of its “stars,” introduces the story of members of Young Chippewayan First Nation and a group of settlers in Laird, Sask., who have the courage to talk to each other about stolen land.

“Our prayer was to honour people we filmed,” says co-producer and researcher Adrienne Leitch. In making the film, Brad and Adrienne became part of the unfolding story.

Thirty square miles of farmland called Reserve 107 had been granted to Chief Chippewayan in 1876, but the people were not residing there in 1897, when the federal government turned the land over to Mennonites for settlement, without either party’s knowledge, writes MCC Saskatchewan Aboriginal Neighbours coordinator Leonard Doell. 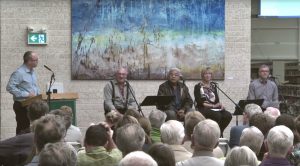 In the midst of Reserve 107 lies Stoney Knoll – a sacred place known to the Young Chippewayan Band as Opwashemoe Chakatinaw – part of the farm Wilmer and Barb Froese have worked for 42 years, and Wilmer’s father before that. There was trepidation when members of Young Chippewayan asked to commemorate the signing of Treaty 6 with the settlers, but the Froeses – raised on Sunday school “lessons of love, peace and justice” – responded to the invitation.

“Meeting people face to face who might be your enemies is the best way to begin peacebuilding,” says Wilmer. “You can’t do it through texting or emails or even telephone calls.”

“Acknowledging [guilt] existed, seeing how hospitable they were toward us,…that has taken guilt away,” says Barb. “They didn’t strike out, but invited us to look at it with them.”

“We want to settle this peacefully,” says George Kingfisher (hereditary chief). His father had advised him: “We are not to take land back from people – that’s their home now. They’ve been there 100 years; you look as bad as government if you do that.”

Doell says there are two parts to settle question of Young Chippewayan lands: building reconciliation with church and community and resolving land claims.

The attention generated by the meetings and the movie has moved up the issue in priority for the government, says Ray Funk, a former public servant and Mennonite farmer involved in the process. 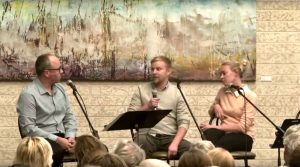 “I grew up in the ’60s, when the idea was to ‘seize the time’… Revolutions – feminism, peace, Black Power – were moving forward,” says Funk. “I think we’re in a time like that now in the relationship between First Nations, Metis and settler people.”

Reserve 107 captures a moment in this unfolding story. “Peacebuilding is a precarious process; [it takes] hard work,” Brad says.

“Fear is replaced with trust, a desire to right wrongs,” says Barb. “We have seen each other’s faces, we have heard each other’s voices, we understand now we are in this together.”

Learn more about the film: www.reserve107thefilm.com