Chatting about God over the airwaves

What I learned about interfaith conversation 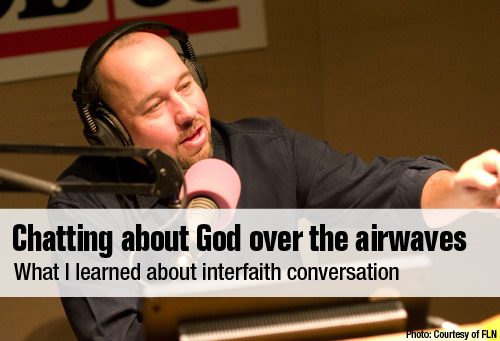 During my 10 years as a producer of GodTalk, a live radio show on Manitoba’s CJOB 68, I spent many hours talking to people of other faiths. Interfaith dialogue was one of the most challenging things I’ve ever done!

Why did I do it? What made it work? What was I trying to accomplish through interfaith dialogue? Scripture reading, coupled with my personal experience, forged several convictions around these questions.

I vividly recall the animated gentleman who phoned in one Sunday night and said, “We are called to evangelize, not to have a dialogue!” He was responding to an interview segment that brought a strong, opposing viewpoint to the table. His call reminded me, yet again, of the challenge of living in a world full of competing and incongruous perspectives.

I worked at interfaith dialogue out of a personal calling to share the good news. In my early twenties, Luke 4:18–19, where Jesus read from Isaiah and proclaimed good news, became my life focus. Doing the hard work of figuring out how to draw people of divergent religions into the studio was one response to that call.

Paul’s posture in relation to his surrounding culture in the story of Acts 17:22–23 provided me with a model. Paul saw the religiosity of Athenians in their objects of worship and engaged them in conversation through those cultural realities.

Whenever I felt overwhelmed by the challenge of navigating an interfaith conversation on the radio show, I would go back to Acts, and draw on Paul for the tenacity I needed to be fully present in our religiously diverse Canadian society. This place was my Athens, and I needed to walk in it.

I also understood my role as a broadcaster as a matter of stewardship. Interfaith dialogue often takes the form of a public event, so whether it’s broadcasting or not, there is a public trust at stake. In my case, I had read the CRTC’s Religious Broadcasting Act, which defined conversation about religion as “a public concern.” I knew the history of how the Religious Broadcasting Act took shape in the 1920s, when the government intervened after broadcasters misused the airwaves and incited conflict. GodTalk was an opportunity to redemptively steward that public trust.

A further compelling reason for engaging the dialogue came in the form of a question from a prominent radio producer who joined the show one evening. Reflecting on his observation that many Christians hesitate to fully interact with the world in which they live, he said, “If you have the Truth, why are you afraid to talk about it?” I believe he understood – better than some – what it means to live Christ in the world.

What made it work?

Before GodTalk existed, I got an invitation to have coffee with a local on-air personality who was curious about the possibility of a show. We had just begun talking about content design, when he put this question on the table: “Do you believe Jesus is the Son of God?” When I said, “Yes I do,” he immediately responded, “Then you have to say that on air.  If you don’t believe in anything, you’re not doing talk radio.”

Interfaith dialogue worked when I came as a true believer. In Matthew 22:37–39, Jesus is asked to clarify the essence of the Law: “‘Love the Lord your God with all your heart and with all your soul and with all your mind.’ This is the first and greatest commandment. And the second is like it: ‘Love your neighbour as yourself.’” True believers love God with all their heart, and also bring their
honest, candid convictions, questions, and doubts to the table.

That day in the coffee shop, I was invited to differentiate between being a religious spokesperson – someone who delivers ideology but doesn’t prompt genuine life-changing considerations – and being a true believer. I realized people weren’t interested in hearing my ideas about God – they became interested when I shared my experience of God.

Matthew 22 also points to Christian uniqueness as the heart of interfaith dialogue. As I said, interfaith dialogue was one of the most spiritually challenging things I’ve ever done. There were a good number of nights when I lay awake after the show, wondering if I had sold my soul to political correctness for hosting viewpoints antithetical to the gospel of Jesus Christ.

Given our political and social climate in Canada, there was always pressure to reverse Jesus’ two commands – to love neighbour first and God second. I believe a caution is in order. When we frame interfaith dialogue primarily as an act of “loving neighbour,” we run the risk of creating events that smack more of political correctness than of genuine engagement on eternal matters of the heart.

This potential reversal is what kept me up at night. My love of neighbour and all its expressions were to flow out of love for “the Lord my God” if neighbourliness was to be life-giving.

What was I hoping to accomplish?

Would it surprise you if I said, “nothing”?

One of the greatest privileges of my involvement in talk radio has been its ability to clarify my role in the kingdom of God. John 16:8–11 describes the work of the Holy Spirit: “When he comes, he will prove the world to be in the wrong about sin and righteousness and judgment: about sin, because people do not believe in me; about righteousness, because I am going to the Father, where you can see me no longer; and about judgment, because the prince of this world now stands condemned.” This Scripture fundamentally challenged what I had long considered my kingdom “job description.”

If the work of the Holy Spirit included clarifying people’s “issues” with them, then what was my job as a Christian communicator? I came to understand that my role was to clearly bear witness to the good news in Jesus Christ I had received.

If something would be “accomplished” in the kingdom, it would be solely and completely rooted in the work of the Holy Spirit. I could decide how people would be treated and what kind of witness I would bear. The rest was in the Spirit’s domain.

Jane walked into the studio on a Sunday night just before Easter. She was a local Wiccan priestess we had invited to explore religious practices that occur in early spring. As she made her way to her seat, she said, “I guess this is the day the pagans get thrown to the lions.” Clearly, she was uneasy about the nature of the conversation we were entering.

“Oh?” I said, “I simply want to hear what you really believe about spring rituals and Easter.” The conversation moved around the table with some very animated and challenging callers on all sides.  An hour later, as we shook hands and thanked Jane for offering her life experience into this public conversation, she said, “You can call me anytime, I’d be happy to be part of this kind of conversation again.”

If you’d asked me what I accomplished that night, I couldn’t give you a specific answer. But one thing I knew for sure, Jane had believed she was going to be given over to “hungry lions.” Instead, she left with an appetite for further conversation and a deeper experience of God.

My prayer is that as we live in the middle of our Canadian diversity, we will grow in our personal calling to share good news, be rooted in Christian particularity, and, ultimately, place our confidence in the work of the Holy Spirit.

In spite of social media taking over, here’s an opportunity for talk shows like this to collaborate and team up with what’s already out there. I love to see the countless verbal vagabonds put in there place by knowledgeable radio talk show hosts. Sports talk show host seem to know how this works and they use it to the max.