What's New
A FOCUS on Mission
Must Patience Be So Slow?
Harold Jantz: A Heart for the Mennonite Story
Lorlie Barkman: A Life of Creative Engagement
Last Days, First Days
Women in Ministry: Bertha Dyck
January Moment in Prayer “Holy Spirit—Fill Us!”
The Church as the Patient Body of Christ
Advent: Making Much of Jesus: Christmas Day
Advent: Making Much of Jesus: Fourth Advent
Home News Reconciling the radical reformation

Report on Bearing Fruit, the Lutheran World Federation Task Force to follow up the “Mennonite Action” at the LWF Eleventh Assembly in 2010. 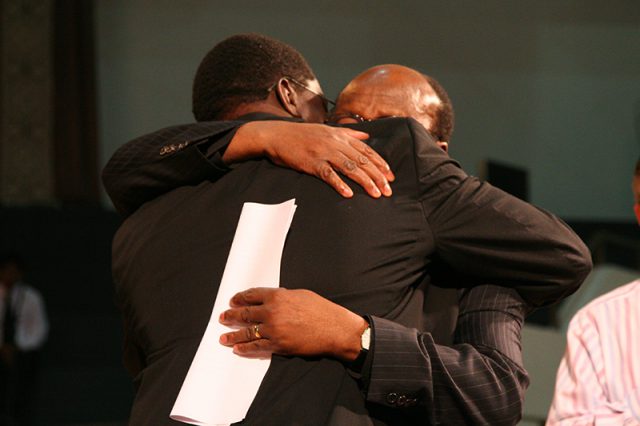 The reconciliation process between the Lutheran World Federation and Mennonite World Conference has created fertile ground for collaboration. A report summarizing the LWF-MWC action of reconciling with Mennonites over the condemnations in the Augsburg Confession aims to help LWF churches, pastors, seminaries and congregations to “implement the LWF commitment to teach differently about Anabaptists, especially to how they are described in the Augsburg Confession.”

“The seeds of reconciliation sown more than 30 years ago, which flowered at the service of reconciliation in Stuttgart in 2010, are now truly bearing fruit,” says John D. Roth, MWC representative on the LWF Task Force and contributor to the document. “Mennonite and Lutheran pastors and church leaders will find lots of ideas for how they might engage each other at the local level.”

The process is rooted in the dialogues started to celebrate the Augsburg’s Confession’s 450th anniversary. Recognizing that “ongoing theological differences could not be constructively examined until the wounds of the past were directly confronted,” LWF began a formal reconciliation process in 2003. The principal work of the study commission was to “write a common history of the painful relations during the sixteenth century.” This process was “itself an ecumenical act and thus already a contribution to reconciliation.”

Both communions recognized “the need for communities as well as individuals to recognize when they are in need of genuine repentance and forgiveness.”

“The work of this Task Force has been to respond to the commitments [on teaching Lutheran confessions, exploring unresolved issues, deepening relationship through common prayer and study and work for peace]….in the conviction that this work of the Spirit has not finished with our churches,” the report says.

One “fruit” of this work is the dialogues on baptism; invited to participate by the Pontifical Council for Promoting Christian Unity), MWC suggested LWF join as well.

Bearing Fruit explores another point of on-going difference – civil authority and Christian participation in war – through an honest, respectful dialogue between Mennonite and Lutheran representatives.

“Hard, even painful, work of re-evaluating the past has opened the way for new relationships,” the report declares. “Trees of hope have been planted. Now is the time to take care that the fruits continue to be nurtured and harvested.”

Five hundred years ago, Anabaptists and Lutherans dealt differently with pressure from governing political powers and condemnations rose against each other, says Alfred Neufeld, Faith and Life Commission chair. “But that all is history. Today, the global church of Christ (Mennonites as well as Lutherans) realizes that the church is called to speak truth to the powers. That new global and transnational awareness frees us to stick closer together.”

Addressing the process at an LWF event in Indiana, USA, MWC president Nelson Kraybill said: “Now it falls on us – pastors like you and me, leaders in all levels of our churches and regional bodies – to resolve that we will love and respect each other and find ways to collaborate for peacemaking and proclamation of the gospel.”