What's New
A FOCUS on Mission
Must Patience Be So Slow?
Harold Jantz: A Heart for the Mennonite Story
Lorlie Barkman: A Life of Creative Engagement
Last Days, First Days
Women in Ministry: Bertha Dyck
January Moment in Prayer “Holy Spirit—Fill Us!”
The Church as the Patient Body of Christ
Advent: Making Much of Jesus: Christmas Day
Advent: Making Much of Jesus: Fourth Advent
Home Life & Faithfeature articles Life together at CMU

“A community of people working together at a common project” 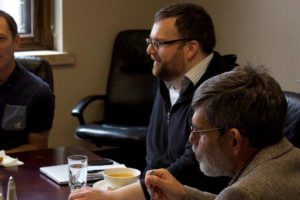 Interviewer Aaron Epp takes breakfast with CMU faculty to discuss working at a common project together.

The vision undergirding Canadian Mennonite University’s formation in 2000 expressed a hope that in working together, Mennonites in Canada could do more in faith-based higher education. While differences in history, theology and practice are present among people from Mennonite Brethren and Mennonite Church Canada denominations, the creation of CMU opened unique, collaborative possibilities for learning and for the church, well beyond music-making.

Sixteen years later, we still occasionally hear the question: “So… how is it actually going with MBs and MCs working together at CMU?”

This spring, I had the opportunity to sit down for lunch with five CMU professors from the Mennonite Brethren tradition and five from the Mennonite Church tradition. I asked them questions so that they could reflect on their shared CMU working experience.

What have you learned to value within CMU’s unique bi-denominational commitment? 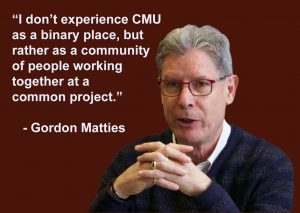 Gordon Matties, Professor of Biblical Studies & Theology (MB): I don’t experience CMU as a binary place, but rather as a community of people working together at a common project.

Sheila Klassen-Wiebe, Associate Professor of New Testament (MC): I grew up in a small town where the large MC and MB churches had little to do with each other. CMU opened a way for me to bridge the rift that I experienced between our two denominations. It’s been a very positive experience.

Tim Rogalsky, Associate Professor of Mathematics (MB): We academics are used to engaging differing opinions and viewpoints. It’s who we are. Disagreement doesn’t mean division. It’s necessary to the quality of our work.

In your experience at CMU, have these two church traditions rubbed off on each other in positive ways? 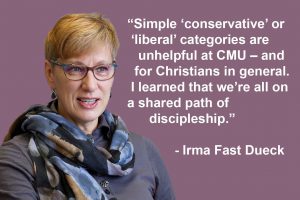 Irma Fast Dueck, Associate Professor of Practical Theology (MC): Early in my teaching at CMU, I taught Introduction to Christian Ministry to a class that was probably 75 percent MB. I realized that the usually animated class would sometimes go silent on certain topics. I learned quickly that I needed to consider the assumptions that I brought to the class and that simple ‘conservative’ or ‘liberal’ categories are unhelpful at CMU – and for Christians in general. I learned that we’re all on a shared path of discipleship. At CMU, I’ve been enriched by walking with people who have different perspectives than I do. I’ve learned to listen and to build relationships, and not see those who view faith and life differently as a problem to fix, but rather as an opportunity to learn from and journey alongside.

Tim Rogalsky: Growing up, I thought of the Good News mostly in terms of the afterlife. My colleagues rubbed off on me, and helped me think also in terms of peace and justice on this earth as good news.

What have you personally received, been gifted with, or learned from ‘the other’ church tradition in your work and interaction at CMU? 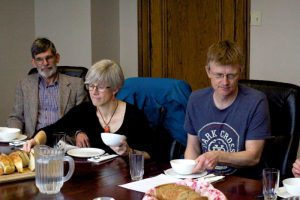 David Balzer, Assistant Professor of Communications and Media (MB): It wasn’t until I came to CMU that I realized that most of my prior work involvement was within one fairly coherent MB network of people who had similar ways of thinking theologically. Working at CMU has pushed me to learn that there are other ways of being and of understanding our faith.

Dan Epp-Tiessen, Associate Professor of Bible (MC): I grew up understanding that peace, justice and ethics were central to Anabaptism, with personal piety being downplayed. At CMU, my MB colleagues enriched my understanding of Anabaptism to include the centrality of a warm, deep and personal relationship with Jesus, and the importance of sharing the good news of the Christian faith. I’m reminded that the 16th century Anabaptists first and foremost embodied this kind of faith in Jesus. My MB colleagues have shown me how personal commitments to follow Jesus are foundational to living lives of reconciliation, peace, and justice. 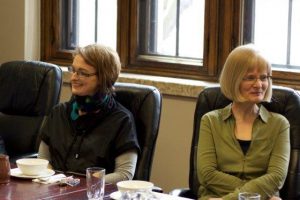 Gordon Matties: I’ve gained a deeper appreciation for the theology of the church from the MC tradition – a deeper awareness that having a high view of the Bible and high view of Jesus are not enough.

Janet Brenneman, Associate Professor of Music (MC): I grew up with a sense that one publicly declared one’s faith on the day of baptism. CMU gifted me with language to more freely express my faith with students and with colleagues in the seemingly private confines of my classroom, or more publicly. I know this is a result of working in the CMU environment.

In what ways has this coming together given you hope for CMU and its future, for the future of MB and MC churches, and for broader ecumenical engagement? 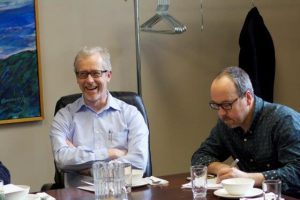 Dan Epp-Tiessen: Bringing these two denominations together provided a foundation for much greater ecumenism. CMU attracts students from all kinds of Christian and other than Christian traditions. I don’t think this could have happened had there just been one denominational group that started CMU. That’s been both a surprise and a huge gift to us as a university.

Andrew Dyck Assistant Professor of Ministry Studies (MB): I’ve experienced a rich ecumenical conversation at CMU. I remember moderating a conversation in class last fall between a Pentecostal from Jamaica speaking about dreams and visions in her church and a Catholic from Cameroon critiquing that, and the whole thing then getting a third perspective from a Filipino Baptist pastor. It was exciting.

Is this kind of faculty conversation important for you? For CMU? 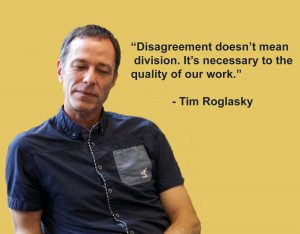 Chris Huebner, Associate Professor of Theology and Philosophy (MC): I had a student complain to me about my Introduction to Christianity class being too Mennonite. I said oh, that’s interesting – what’s your tradition? Anglican, the student said. “Well, have you noticed that Anglicans wrote the two texts we’re using in the course?” “No, I hadn’t.” Which is only to say that we faculty need to do the hard work of locating ourselves meaningfully within our faith traditions. This is the hard – and interesting – part of the CMU project, whether it’s from MB, MC, or another faith background.

Tim Rogalsky: I think we work together so well because we have a common project. It would be great if we could bring denominational leaders together on campus for something similar – a project that we all agree needs to be worked at together, more so than a theological dialogue about our differences. At a recent science and religion conference, a Jewish historian challenged us to consider the care of the earth, something all faith traditions care about and need to act on together. 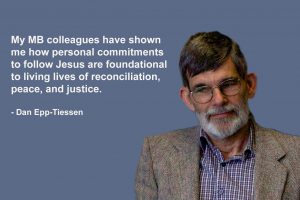 Gordon Matties: CMU is a long-term project, and things change slowly. We’ve been here 16 years and we can say, yeah, things have changed, but we’re actually part of a much longer project that will hopefully keep emerging over another 16, 50 and 100 years. It’s worth putting energy into this shared university. It would be great if we can help our churches imagine a future that continues to bring us together in new ways.

This article was originally published in The Blazer, CMU’s magazine for alumni, supporters, and people interested in Christian university education. Used with permission.

Would it ever be even remotely possible for the MB’s to merge with MC Canada? What would that look like? Or is that just naive?