What's New
How sweet the sound
One MCC Thrift Store Began With a Few...
A Hunger for Conversation
Getting the mental and emotional rest you need...
The Patience of God
2023 Spirit of MDS Fund accepting grant applications
October 2022 update from the CCMBC Executive Board
Arnold Community Church hosts block party to thank...
When Spring returns
An autumn reset
Home Arts & Culture Novel addresses intergenerational trauma 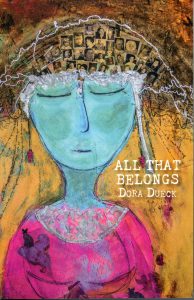 In the story, Catherine has spent years conserving the pasts of others, only to find her own past reappearing on the eve of retirement. She describes that first year of retirement as “the year of my preoccupation with the dead.”

Catherine mines memories of her difficult uncle Gerhard and troubled brother Darrell, following them from the small farm in rural Alberta to the Mennonite college in Winnipeg and beyond. En route, she discovers through newspaper clippings and letters something even darker at play, reaching back to forebears in Ukraine. She unearths intergenerational trauma that has been passed down through the family, embodied and redeployed, hidden and manifested, until Catherine is finally able to make peace with her past, her grief, her memories, and her pain.

Along the way, Dora has Catherine navigating the streets of Winnipeg, noting the buildings, landmarks, and skylines. These are delightfully rewarding for readers who have spent some time in Winnipeg. And even those who haven’t will find stimulating the descriptions of houses, farm life, towns, schools, and meals, as Catherine follows up on hunches that become part of her discovery quest – including a road trip back to the Alberta farm of her youth to check her memories and interview past acquaintances.

The narrative moves at a good pace, alternating between Catherine’s youthful memories and the mature experience of her present as a retiree also caring for an aging mother in a personal care home. The sights and sounds are described with vivid texture and feeling. The scenes of tenderness between Catherine and her husband, Jim, are endearing – the descriptions of sexual intimacy, longing and loss, and the seasons of family life rolling through the decades are surprisingly insightful and apt.

There is plenty of perceptive exploration of growing up Mennonite on the Prairies during the 1950s through to the 1970s, the challenge of transitioning from German to English, the tension between rural and urban.

Catherine navigates the rugged terrain of leaving an isolated and pious church-centred framework for a faith that engages with science, culture, literature, and music. She embraces an Anabaptist theology of love, justice, peace, and acceptance, which is more expansive and affirming, and therefore threatening to the old ways of being Mennonite.

One interaction from the 1970s gives a snapshot of the colliding worlds occupied by Catherine’s parents and that of Catherine and her brother, Darrell. Here Catherine defends her brother’s (and her own) newly discovered notions of justice and peace in a conversation with her mother.

Mom, I said, it’s not wrong to want a better world!

Then Mom apologized for fretting but asked what was wrong with the world as it was.

How to even begin to answer? Or explain what it was like to be our kind of young? The world not airtight as our parents supposed. Her [Mom and Dad’s] generation survived the Depression and the War, worked without stopping, founded camps, youth programs, and schools to inculcate their traditions, sacrificed to sustain them, and now expected gratitude but their children weren’t grateful enough. They [Mom and Dad] still remembered what the communists had done to our people in Russia; they thought disillusionment with the West was willful and extravagant, this focus on bombs, overpopulation, acid rain, nuclear destruction, segregation.

But probably the feature of All That Belongs that makes me recommend it the most is that Dora manages to put in the form of story the important topic of intergenerational trauma. Catherine experiences both the dangers of not addressing it and the merits of acknowledging, forgiving, and loving those in our family ancestry living with mental illness, trauma, and suffering. By doing the hard work of facing our ancestors and their trauma, we too have an opportunity to drain the debilitating shame and silence that lodges in our bodies and affects our capacity for intimacy and wholeness.

And the cover art by Agatha Fast is wonderful and clever. The collage on the cover depicts how the lives of our ancestors have an uncanny way of showing up in the way we engage the world: their images stubbornly populate the mindscape of who we are. Catherine’s example shows us how it is better to learn to know them and make friends with them, even those puzzling and troubling forebears. Our own health, healing, and wholeness depend on it!

Why read this novel? Because Catherine’s year-long quest to make sense of her memories and her family could be useful for your own processing. In the end, Catherine’s quest leaves her in a good place, at peace and alive to all that belongs. Perhaps you’ll find encouragement to engage in a similar quest of your own.

Thank you, Dora, for sharing with us your meditation of love and how to age with dignity, grace, and strength.

Dora’s fiction has earned critical acclaim. Her novel This Hidden Thing (CMU Press, 2010) won the McNally Robinson Book of the Year prize at the 2011 Manitoba Book Awards, and her short story collection What You Get at Home (Turnstone Press, 2012) won the 2013 High Plains Award for short fiction. Her novella Mask was the winner of The Malahat Review’s 2014 novella contest.

All That Belongs was launched at McNally Robinson, Winnipeg, Oct. 5, 2019, with Dora reading excerpts and taking questions.

Jon’s review of Dora’s novel first appeared in the December 2019 issue of the Mennonite Historian and is re-posted on MBHerald.com with permission.