What's New
Leading through the trauma of covid: Part two...
Ask God which town
Where to from here?
CCMBC National Director attends 2022 ICOMB Summit
MCC Canada and MCC Manitoba sell shared property...
The world appears to be growing darker
Sharing a new and unified language
6 reasons to attend the MWC Global Assembly...
One too many
Just one more
Home News Out of horror, Kasai survivors rebuilding their lives 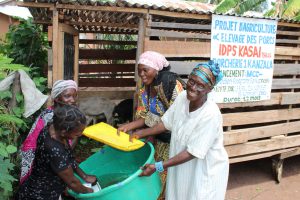 Earlier this year in the city of Tshikapa, four Congolese women laughed together as they filled a water trough for their pigs – animals that hold the promise of income for them in the year to come. Their jovial moment was captured in a photo.

Their laughter stands in contrast to their experiences, just two and three years ago, when they fled their villages in the Kasai region of the Democratic Republic of the Congo (DR Congo) to avoid being killed. They and thousands of other displaced people brought nothing with them to Tshikapa except memories of beheadings, burned houses and lost family members. 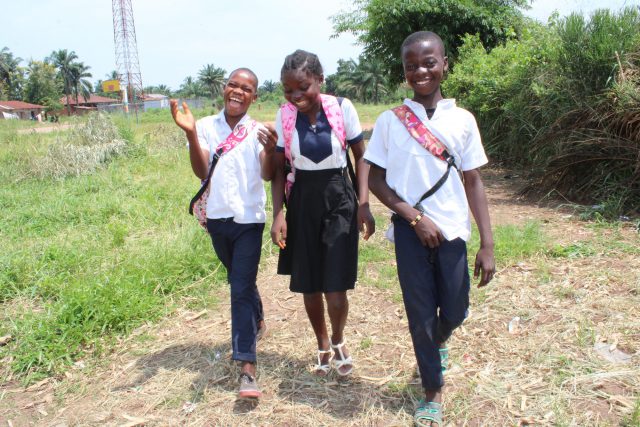 Caught on camera in another part of Tshikapa this year were three sixth graders walking home from school in their blue and white uniforms. They were laughing together like one of them had just told a good joke.

These children and hundreds of other displaced children go to school every day now instead of hiding from or fleeing the fighting, which created many orphans.

The educational opportunities and pig projects, and maybe some smiles, can be credited to Mennonite, Evangelical Mennonite and Mennonite Brethren churches in the cities of Tshikapa and Kikwit and in the Kabwela area. 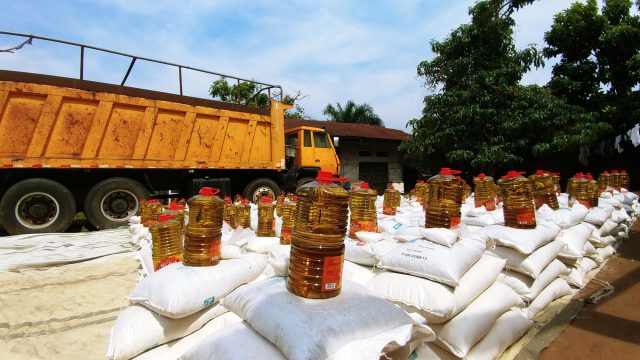 Orderly stacks of food items are an indication of the well-organized process of distribution in Kikwit, Kwilu Province, Democratic Republic of the Congo (DR Congo) in March 2019. MCC partnered with Communaut des Eglises de Frres Mennonites au Congo (CEFMC; Mennonite Brethren Church of Congo) to provide emergency food aid in Kikwit. The supplies were divided up by family unit, four sacks of rice and flour and beans, a bag of salt and a large bottle of cooking oil.
MCC photo/Ruth Keidel Clemens

In partnership with Mennonite Central Committee (MCC) and with support from Anabaptist organizations around the world, the churches reached out to minister to the displaced people who flooded their neighborhoods and settled in their church yards. The churches’ first major food distributions were in 2017.

Overall, more than 1.4 million people were displaced and about 5,000 killed since political fighting began between Kasai militia group Kamuina Nsapu and DR Congo security forces in 2016. The initial conflict incited more violence among ethnic groups in Kasai, drawing out the crisis.

Through MCC’s account at the Canadian Foodgrains Bank, the churches continued distributing emergency food in 2018-2019 to 1,180 displaced families. They also helped pay school fees and provided school supplies for 950 children.

Although the violence has abated in Kasai now, many displaced people are still trying to find their footing as they rebuild their families, homes, emotional health and income in a new place. Returning to their home villages is not an option for many because their villages were destroyed or are still unsafe.

The churches continue to help displaced people this year by providing pigs, gardening supplies and garden plots, with the support of MCC. Over time, piglets and farm produce can be sold, helping families become self-sufficient. 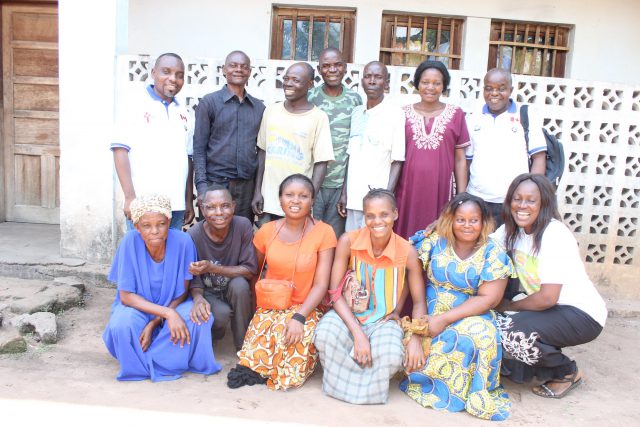 Caption: : Members of the local relief committee in Kikwit, Kwilu province, Democratic Republic of the Congo (DR Congo), stand with a group of participants in a March 2019 survey on an MCC-supported food assistance project in Kikwit. MCC photo/Kabamba Lwamba

Churches also are providing trauma healing workshops, led by lay leaders who were trained to help workshop participants recognize how trauma has impacted them and to share their experiences with each other in supportive ways. Together, they talk about how to move on with their lives.

“Displaced persons and host communities have been affected by violence either directly or indirectly. Wounds of trauma are deep and wide,” said Mulanda Juma, MCC representative for DR Congo.

“Some people show inability to address their own basic needs without support, some still remain hopeless. These wounds will take long to heal. Therefore, trauma healing response will remain a critical component of recovery both for individuals and communities.” 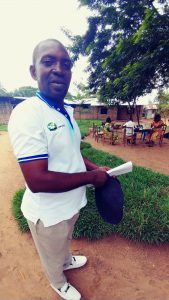 Kimenga Samuel helps others through his work on the Kikwit relief committee. MCC photo/Ruth Keidel Clemens

Samuel Kimenga was one displaced person who became reconnected to the church because of the kindness of Communauté des Eglises de Frères Mennonites au Congo (CEFMC; Mennonite Brethren Church of Congo) in Kikwit.

Kimenga’s children were happy because they could go to school with the church’s educational support. He and his wife attended the trauma healing workshops.

“We had left the church,” Kimenga said. “It had been a while since we had entered a church to worship, but through this kindness we returned to attend church again.”

Now he is a member of the Kikwit relief committee that coordinates distributions and other support for the most vulnerable displaced people.

Learning to manage large distributions was a growing edge for CEM and CEFMC, as well as Communauté Mennonite au Congo (CMCo; Mennonite Church of Congo) in Tshikapa.

But as a result of the MCC trainings of the relief committees, churches have become more confident and skilled in carrying out distributions, said Ruth Keidel Clemens, director of programs for MCC U.S. Through interaction among the three church groups, new relationships were formed. 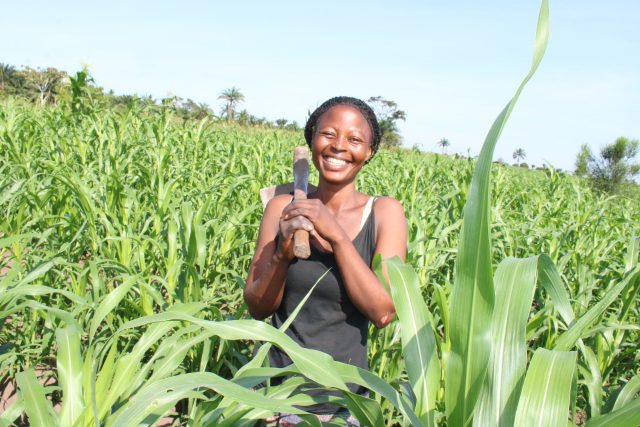 “I am very proud of this partnership between MCC and CEMFC and other Mennonite groups,” said Leontine Matula, member of the CEMFC relief committee. “I went to observe the response in Tshikapa with CMCo and I made friends. Then I went to a training in (the city of) Goma where I met these friends again.

“Without this partnership, I would have never known about my other Mennonites sisters,” she said. “This has helped to open up my life to these new friendships. It pushed me to understand how we can reach out our hands together to help others.” 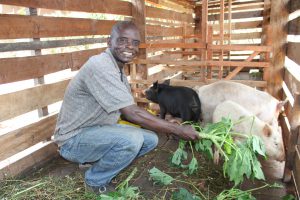 Guardian Jean Lutondo feeds the pigs at one of the piggerys that will provide income for people displaced by conflict in Kasai. MCC photo/Kabamba Lwamba

The work of the relief committees continues even though food distributions have now ended. MCC continues to fund the churches’ educational, trauma and livelihood projects. Health care is an unmet need, said Juma.

Life is still uncertain for displaced people as they wait for the farming and pig-raising projects to provide a stable income, but compassion is strong.

When Kanku Ngalumulume first came to Tshikapa, the 10-year-old had no one. He said he had run away from his home village of Senge when his parents and his siblings were beheaded. “I have no hope for any reason,” he told Juma in February of 2018.

A year and half later, Ngalumulume is sitting in the midst of the Tshiama family – Mom, Dad and five girls ‒ as they eat together. They’ve brought him into their family. In the picture, he’s squeezed in a chair beside Mama Tshiama and he is smiling, just about on the verge of laughing. 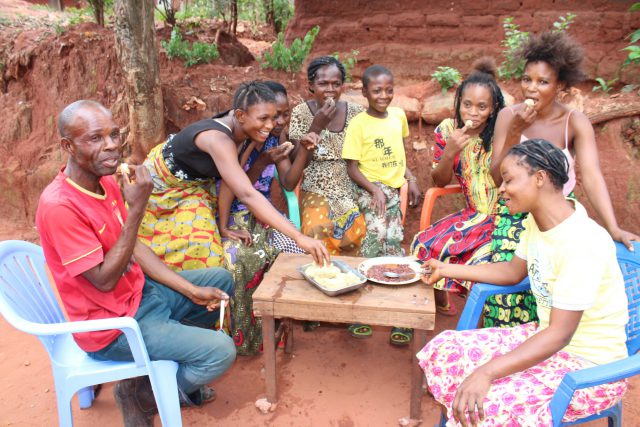 is news coordinator for MCC U.S. Quotes in this story were collected by Ruth Keidel Clemens, director of programs for MCC U.S., on a 2019 trip to DR Congo.

Mennonites join to provide food and shelter in DR Congo