What's New
Leading through the trauma of covid: Part two...
Ask God which town
Where to from here?
CCMBC National Director attends 2022 ICOMB Summit
MCC Canada and MCC Manitoba sell shared property...
The world appears to be growing darker
Sharing a new and unified language
6 reasons to attend the MWC Global Assembly...
One too many
Just one more
Home News Crops, pigs, and school in DRC 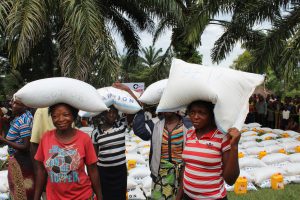 Strengthened by a continuing supply of emergency food, 700 families who have been displaced by violence in the Kasai region of the Democratic Republic of the Congo (DR Congo) are preparing to plant crops and to raise pigs to support themselves.

In partnership with Mennonite Central Committee (MCC), Congolese Mennonite and Mennonite Brethren churches have provided the tools, seeds and pigs to get started farming. Trauma healing workshops are beginning, and children are attending school.

Displaced families living in the cities of Kikwit and Tshikapa and the Kabwela area of DR Congo are among more than 1.4 million people who were forced from their homes by fighting so fierce that children saw their parents beheaded and their homes burned to the ground.

The fighting between local militia group Kamuina Nsapu and national security forces, which began in August 2016, subsided after a year and the death of about 5,000 people, according to Reuters news agency. However, the initial violence ignited existing ethnic hostilities that have caused ongoing bloodshed in parts of the region today.

About half of the displaced people have been able to return home, according to United Nations reports. Others cannot go back home because it’s not safe or because their homes and villages no longer exist, said Mulanda Juma, MCC representative in DR Congo.

Funding for food primarily comes from MCC’s account at the Canadian Foodgrains Bank, which will continue to support food distributions through March 2019. MCC’s donors and Anabaptist organizations around the world are supporting the rest of the $1.1 million response.

Petronie Lusamba, a mother of four whose husband was killed in the violence, said the food has made a big difference for her family.

“The quality of food they are giving is very good. My health and my children’s health is so good because of the food. I thank MCC a lot,” she said. 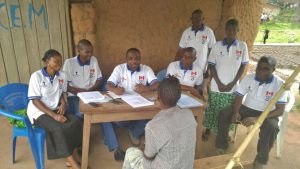 The Kabwela relief committee of Communaut Evanglique Mennonite is responsible for distributing food and farming supplies to the most vulnerable people in their area who have been displace by violence in the Kasai region of the Democratic Republic of the Congo. PHOTO: MCC/Matthieu Abwe Luhangela
More information:
Displaced families living in in the cities of Kikwit and Tshikapa and the Kabwela area are among more than 1.4 million people who were forced from their homes by fighting so fierce that children saw their parents beheaded and their homes burned to the ground.
Food distributions are supported through MCC’s account at Canadian Foodgrains Bank and all other work — education, trauma workshops, training of relief committees and farming supplies are supporting by MCC and Anabaptist organizations: Africa Inter-Mennonite Mission; Caisse de Secours, the development arm of the French Mennonite Church; International Community of Mennonite Brethren; MB Mission; Mennonite Church Canada Witness; Mennonite Mission Network; Mennonite World Conference; and Swiss Mennonite Conference.

Now the churches are going a step further and providing ways for families to grow their own food.

In Kabwela, Communauté Evangélique Mennonite (CEM; Evangelical Mennonite Church) is providing land for 100 families. The farmers have already begun to use their new machetes and hoes to prepare the fields and plant cowpeas, a legume with a high tolerance for sandy soil and heat. After harvesting the cowpeas in January, they will plant more and add cassava, a plant whose tuberous root can be ground into flour or cooked.

In Kikwit, Communauté des Eglises de Frères Mennonites au Congo (CEFMC; Mennonite Brethren Church of Congo) is providing pigs to 200 of the most vulnerable families. Once the pigs give birth, the piglets can be sold to buy other food, pay school fees and other bills.

Learning to distribute food fairly and to plan for future projects has been beneficial for church relief committee members in Tshikapa, said Juma. As members worked together to decide where to distribute food, they had to face their own biases against each other’s ethnic groups and those of the recipients.

Juma, who had been a peacebuilding practitioner in South Africa with MCC, helped the committee learn to make decisions based on the recipients’ level of vulnerability rather than ethnicity. Ultimately, every member of the relief committee agreed who the vulnerable people were and where to distribute the food.

“The food assistance has created some kind of unity,” Juma said. The CMCo committee continues to work together as they learn more about finances and other elements of relief work.

In Tshikapa and in Kikwit, churches have added more women to their relief committees than the two that MCC required when the committees were created, Juma said. Initially, the churches hesitated to include women, but as the women’s ability to organize became evident, the churches appointed more women and sent them for training to learn more about humanitarian work.

As part of the three-day workshops, the newly trained leaders explain to other displaced people what trauma is and how it manifests itself in destructive behaviors. Leaders create safe space for group members to talk about their personal traumatic experiences and to grieve with each other before they talk together about how to live into the future. 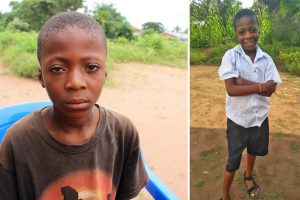 Kanku Ngalamulume watched the murder of his parents and siblings. After 8 months in Tshikapa with regular food, school supplies and an adoptive home, a smile has returned to his face. PHOTO: MCC/Mulanda Juma and Matthieu Abwe Luhanglea

All three churches are helping displaced children move on with their lives by making sure they have uniforms and school supplies and can attend school regularly. Starting in September, about 950 children, most who had missed school for at least one year, began going to school.

One of those children is Kanku Ngalamulume, who was 10 years old in February 2018. He told Juma then that he saw his parents and siblings being beheaded before he had managed to escape to Tshikapa with some neighbors.

“I am alone here,” he told Juma through tears. “Mama Agnes (another displaced person) is the one taking care of me. If she has food, we eat. If she doesn’t have, we don’t eat,” he said. “I have no hope for (any) reason.” His eyes and slumped shoulders on his photograph matched his words.

Eight months later, Ngalamulume seemed happier when Matthieu Abwe Luhanglea, MCC’s program manager in DR Congo, visited him in Tshikapa. Ngalamulume is now living with one of the relief committee members. He has regular food and goes to school, where he is doing well academically.

“You know he didn’t smile before,” Luhanglea told Juma. “He’s healthy and smiling.” 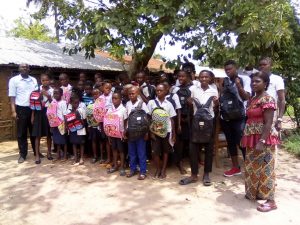 Small positive changes encourage Juma as he works with the churches to address the ongoing needs.

But he is grateful for all that already has been given.

“Thank you so much for the support. We really, really appreciate it,” Juma said. “People on the ground appreciate the support very much. It’s making a difference.”

Supplying food to people displaced by violence in Kasai

Mennonites join to provide food and shelter in DR Congo