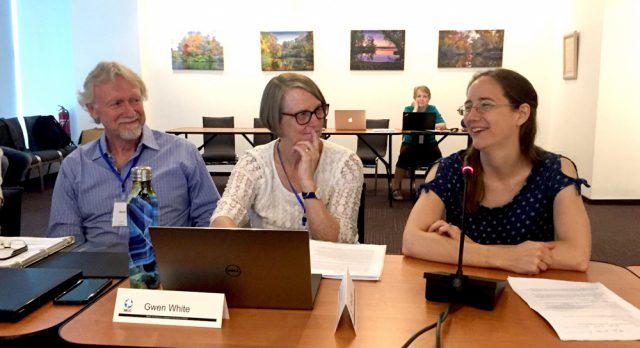 Mennonite Central Committee has a loyal constituency, but its leaders don’t take the support for granted.

“We can no longer assume Mennonite churches are familiar with MCC,” said board member Robert Enns of Calgary, Alta. “There are a lot of churches where MCC is just another organization out there.”

To stand above the competition — and to safeguard MCC’s special place in the hearts of many Anabaptists — agency leaders on June 20 decided to give more attention to increasing engagement with people “across the full range of Anabaptist churches and beyond.”

This goal is part of a four-point strategic plan for 2020 to 2025 that the U.S. and Canadian MCC boards approved during joint meetings while on a learning tour in Ukraine.

The plan calls for renewing MCC’s identity and mission and deepening its spiritual grounding as a witness to God’s love as the agency begins its second century.

Financial support remains strong. Shared program contributions were $48.9 million (U.S.) in the fiscal year that ended March 31, up from $48.5 million the previous year.

Yet board members and staff said it was increasingly important to tell MCC’s story in Anabaptist churches and to work at attracting support among young people and members of other faith traditions.

The plan mandates “an increased focus on audience-based communication, fundraising and strengthened recruitment efforts with a new generation.”

The other three points call MCC to do the following:

Paying attention to climate change relates not only to programs in the field but also to building relationships with younger people.

“You have to include climate change, because that is what the younger generation is concerned about,” said board member Gabriela Ochoa of Essex, Vt.

Others said the creation-care priority was important because climate change drives extreme weather that hinders development and is linked to an increase in natural disasters. All of this affects MCC’s international partners and programs.

“There are going to be more water crises,” said board member Jill Schellenberg of Hillsboro, Kan. “We have to have [climate change] in our minds because it is in our future.”

Members of both boards stood and applauded after getting the strategic plan done sooner than expected. They had planned to  finalize it at their fall meetings.

Canadian board chair Paul Gilbert said the early completion showed a spirit of unity on both sides of the border.

U.S. board chair Gwen White noted the significance of adopting a strategic plan that will begin in MCC’s centennial year.

“Our work has evolved over the century,” she said, citing the addition of peacebuilding as a priority in the past and now moving creation care from the “the edges of our conversation” to a central place. “We are a part of this generational development of expanding how we do what we do, making it relevant now.”