What's New
How sweet the sound
One MCC Thrift Store Began With a Few...
A Hunger for Conversation
Getting the mental and emotional rest you need...
The Patience of God
2023 Spirit of MDS Fund accepting grant applications
October 2022 update from the CCMBC Executive Board
Arnold Community Church hosts block party to thank...
When Spring returns
An autumn reset
Home News Pastor shares love at war front 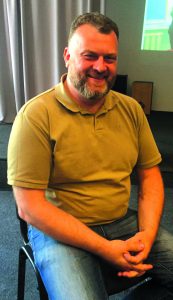 As the stalemated war in eastern Ukraine enters its sixth year, life goes on as normal in this city about 150 miles from the front.

People here would rather not think about the war, Sergey Panasovich says. To them, the shelling and sniper fire between government forces and pro-Russian separatists in the breakaway provinces of Donetsk and Luhansk might as well be foreign.

Panasovich rejects this indifference. The gospel compels him to act.

“The war is a big crisis, but it also brings opportunity,” he said June 18, talking with MCC visitors in the meeting place of his congregation, New Hope Mennonite Church.

New Hope belongs to the Association of Mennonite Brethren Churches in Ukraine, one of MCC’s partners.

“If it were not for the war, we would be concentrated on ourselves,” Panasovich said. “God’s plan is not understandable to all of us.”

As Panasovich sees it, Wiens brought a new understanding of Christian faith, and this revelation has led to the revival of a Mennonite presence in eastern Ukraine.

Ten years ago, on a church-planting mission, Wiens and his wife, Evelyn, arrived in Ukraine and founded the New Hope congregation.

To Panasovich, they were a different breed of Christian.

“John Wiens showed us how to do good deeds, not as propaganda but because you love others,” Panasovich said. “That changed us.”

It was like discovering a “new Christian world,” he said, to learn that sharing the gospel meant ministering to the whole person, physically and spiritually.

But the couple’s mission was cut short when John Wiens died on Jan. 14, 2014, in British Columbia, at the age of 69, just six weeks after receiving a diagnosis of cancer.

“What I saw in Mennonites touched me deeply,” he said. “I was drawn to the holistic approach — social, economic and spiritual.”

He would soon live out that way of faith on a larger scale.

Five years later, the war has left 13,000 dead and driven 2.4 million people from their homes. Of these, 1.4 million are internally displaced people, or IDPs, in Ukraine.

In 2014, the New Hope congregation made an evacuation plan in case the war came to Zaporizhzhia.

The conflict remained distant, but New Hope members decided they must go to the front.

They launched war-relief ministries, including opening their doors to IDPs. Elderly women donated chickens for those in need. Members delivered food to the war zone. There they saw strong men cry, Panasovich said, “because there were people who didn’t forget about them.”

The Association of Mennonite Brethren Churches in Ukraine joined the efforts, as did MB Mission, the North American agency now known as Multiply. As the mission organization decided to focus on planting a church in the conflict area, New Hope continued to work more closely with MCC.

The MB association has concentrated its relief efforts on Avdiivka, about four miles from the major city of Donetsk and less than two miles from the front that divides Ukrainian-controlled territory from the region held by the separatists and their Russian allies.

The outbreak of war led the residents of Avdiivka to flee. Its population fell from 40,000 to 5,000, Panasovich said. Many who remained lived in basements to find safety from the shelling. When the situation stabilized, the population recovered to 25,000, though many returned to destroyed homes.

As unemployment spiked, casting families into poverty, canned meat from MCC has eased the strain. Pensioners who receive $65 a month often must support younger family members who can’t find work. The stipend doesn’t leave much for food after utility bills and other expenses are paid.

Beyond meeting physical needs, New Hope does peacebuilding work, including activities with children and youth. Wartime trauma touches all ages. During conflict-resolution classes, Panasovich said, teachers and students felt the walls shake due to shelling.

To work with schoolchildren, New Hope participates in the MCC partner organization Fire of Prometheus. Projects have included organizing trips to give kids a break from the conflict zone.

MCC supports two families who work with children in Avdiivka .

Building relationships in Avdiivka “has given us a chance to tell about the influence of Mennonites,” Panasovich said.

The history of that influence in eastern Ukraine goes back to 1885 when the Mennonite settlement of Memrik was established about 20 miles from Donetsk. Initially settled by 1,300 people from the Molotschna colony, its population grew to 3,500 by World War I. The 1918 revolution brought suffering as Nestor Makhno’s bands of anarchists murdered and pillaged. Food from the newly organized MCC saved many from starvation in 1922.

The next two decades held more tragedy. Thirty families were able to migrate to Canada in the 1920s. After many of those who remained were exiled to Siberia in the 1930s, followed by a final round of exiles to the east when the German army invaded the Soviet Union in 1941, Russians claimed the empty homes. Only a handful of Mennonites remained in Memrik to flee with the retreating German army in 1943.

More than 70 years later, some Mennonite buildings that stood for more than a century were destroyed in the current war, Panasovich said.

Panasovich sees sharing the gospel of peace in Zaporizhzhia and Avdiivka as a new chapter in Ukraine’s Mennonite history.

“We tell people the Mennonites are not indifferent to the place where their ancestors came from,” he said. “I don’t know what God holds for us in the future, but we should be a source of healing.”