What's New
A FOCUS on Mission
Must Patience Be So Slow?
Harold Jantz: A Heart for the Mennonite Story
Lorlie Barkman: A Life of Creative Engagement
Last Days, First Days
Women in Ministry: Bertha Dyck
January Moment in Prayer “Holy Spirit—Fill Us!”
The Church as the Patient Body of Christ
Advent: Making Much of Jesus: Christmas Day
Advent: Making Much of Jesus: Fourth Advent
Home News Dairy farms and church plants

A new Mennonite legacy in Ukraine 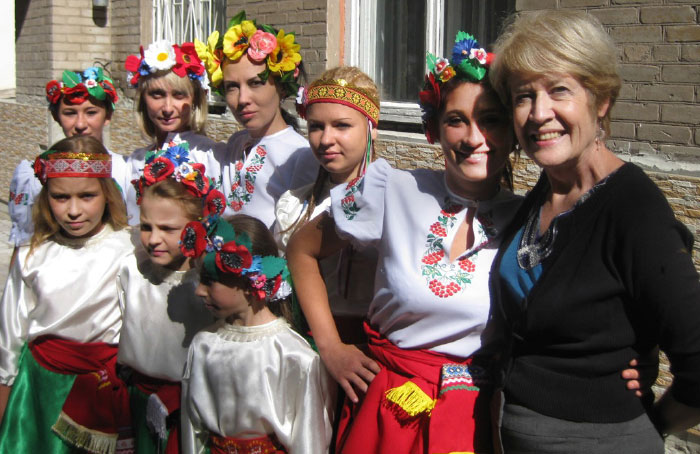 Evelyn Wiens with the Ukrainian dance group from the orphanage on the first day of school.
Photo: John Wiens

It has been almost a century since the Russian revolution and civil war initiated a Mennonite diaspora, and nearly as long since Mennonite Central Committee organized to begin relief operations back to Russia. The setting of both much joy and great pain for Mennonites, the former Soviet Union has long been a destination for an intermediate generation of missionary: those who grew up with the stories of terror but who believe in the possibilities of the future.

The call of the motherland is powerful, even for those happily settled in North America. John Wiens was pastoring at Gracepoint Church, Surrey, B.C., when he and his wife Evelyn, both in their sixth decade, decided to relocate their ministry to Zaporozhye, Ukraine. John was haunted by a chance meeting with an immigrant from Kiev; Evelyn was inspired by a mission trip to Mexico.

“We had never thought or planned on being missionaries,” says John. “It was not on our wish list at all.”

Both had stable employment and were only a few years from retirement. Yet when John finally broached the subject of a potential mission placement with Evelyn in August 2006, she surprised him by agreeing immediately. By September 2007, they were on the ground in Zaporozhye, having agreed to a 10-year term with MB Mission.

For John, whose direct ancestors arrived in Zaporozhye among the first wave of Mennonite settlers in 1789, it was almost a homecoming. He and Evelyn brought four objectives: to establish a church, recovery ministry, fundraising organization (in Canada), and private trade school for youth “aged out” of the many orphanages.

Today, more than six years into their commitment, John and Evelyn have accomplished several of their objectives, including establishment of what they believe to be Ukraine’s only private trade school. Last year, nine students – all orphans or wards of the state – participated in the first nine-month program on a dairy farm in the neighbouring village of Nikolay-Pole.

The dairy is run by Garry Verhoog, a farmer from Steinbach, Man., who moved to Ukraine in 2008 with his wife Teresa who teaches English. Their ministry is funded through the proceeds of their family-run 800-cow operation in Steinbach. Garry and Teresa met John and Evelyn almost a year into the Verhoogs’ ministry, and both instantly sensed an opportunity for partnership.

“I’m not a pastor or a preacher; all I know is farming,” says Garry, whose work in teaching, training, and community development belies his words. “[The Ukrainian] dairy industry was really underdeveloped…. So my idea was just to come; we’ll start a small farm, and just demonstrate to the people around us better ways to take care of cows.”

Garry and Teresa currently operate a 40-cow farm, but they have just purchased a Soviet-era collective farm and are in the process of renovating it. Eventually, they’d like it to become a self-sustaining 200-cow farm that pays for the dairy portion of the trade school program.

Garry has also become an indispensible part of the village community, helping residents negotiate land rights, build and organize an irrigation pipeline, and providing micro-credit. “Hardly a day goes by that somebody doesn’t knock on my door and ask me to come to their house or their village and breed their cow for them,” he says.

Both couples stress the importance of the growing trade school in meeting the needs of Ukraine’s orphans, who often leave the state’s orphanages with few skills and little work experience.

Garry sees his dairy school as a way to defy the percentages. “I want a program where the students live in the village and work every day on the farm. [Where they] make enough money on the farm to support them while they’re going to school, and receive really good practical experience on how to work and live on a dairy farm.

“The biggest challenge to working with orphan kids is they don’t know how to work;…they’ve never experienced having to get to work on time every day.”

Their ministry also provides John and Evelyn opportunity to educate their neighbours about Mennonites and their history in Ukraine. According to Evelyn, most don’t even know what Mennonites are, even though many distinctive Mennonite-built houses and barns are still standing. Garry, whose Dutch ancestors “can probably take credit for starting the Mennonites on their way to the Ukraine,” says that Nikolay-Pole (formerly Nikolaifeld) is one of the best-preserved Mennonite villages in the Ukraine – just without any Mennonites.

Garry’s expanding trade school has become “a bigger project than I can do myself,” he says. “The country is full of kids who are finished with the orphanage system and they’ve never learned how to work, have a family, or live in a family. This is just a great opportunity to do that, but we need some more funds to do it. Our first prayer request is that we find a way to fund this whole project.”

John, who has recently discovered further ancestral ties to the region, sees an opportunity to create a new story with the help and support of other believers. “I would just love to say to my brothers and sisters: ‘Earlier, as Mennonites, we left a legacy here of hard work, good farming methods, and good factories. Help us leave another legacy – of changed lives among orphans and of church plants. We need people to pray for us; we need people who will invest.’”

With a mixture of sadness and celebration, the MB Mission family received news of John Wiens’ death this morning, Jan. 14, 2013.

When John received the diagnosis of cancer six weeks ago, he had just finished 3 months of preaching in churches across Western Canada sharing the story of God’s work in Ukraine. John accelerated across the finish line and he has joined the celebration in the presence of the Lord with the angels and the many people he has led to Christ who have gone on before him! “I have fought the good fight, I have finished the race, I have kept the faith” (2 Timothy 4:7)
—Randy Friesen, MB Mission, general director


In late November 2013, during John and Ev Wiens’ visit to North America, the doctors discovered a cancerous tumor on John’s esophagus. He is currently undergoing radiation treatment at Surrey Memorial Hospital in Surrey, BC. Please pray for strength and healing.

Hi! I was pleased to see the article “Dairy Farms and church plants” by Paul Esau. I am waiting for the “Rest of the story” -Paul Harvey style. I am secretary of Canadian Resources for Missions Foundation http://www.candianresourcesformissions.com.

Inspiring article on the love christians have for the weak and suffering orphans in our world. May the love of Christ shown be a witness of the healing love of Christ