What's New
A FOCUS on Mission
Must Patience Be So Slow?
Harold Jantz: A Heart for the Mennonite Story
Lorlie Barkman: A Life of Creative Engagement
Last Days, First Days
Women in Ministry: Bertha Dyck
January Moment in Prayer “Holy Spirit—Fill Us!”
The Church as the Patient Body of Christ
Advent: Making Much of Jesus: Christmas Day
Advent: Making Much of Jesus: Fourth Advent
Home News No born Mennonites among us 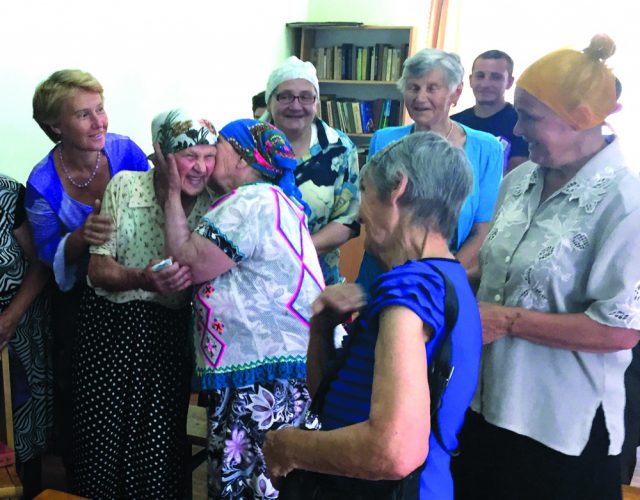 Lydia Grigoryevna, second from left, gets a birthday hug after worship at Nikolai­polye Mennonite Church on June 16. (Paul Schrag/MWR)

Welcoming visitors from North America, Ivan Kapel­ushniy, pastor of Nikolaipolye Mennonite Church, led his congregation of about 15 people in singing “For God So Loved Us” in Russian.

“There are no born Mennonites among us,” Kapelushniy said on June 16, 2019,  as mission worker Mary Raber translated. “We became Mennonites.”

Kapelushniy counts himself among the converts.

“I became a believer in 2006,” he said. “When I began to go to church, my co-workers laughed at me. They wondered what I had to do with those people. But now they understand.”

Through the influence of Canadian mission workers, the congregation has revived a Mennonite presence in the town of about 1,000 people surrounded by wheat fields.

They worship in a simple, bare-walled room, with an open window letting in a breeze on a summer morning. The 19th-century building is a former Mennonite school, restored in the 21st century by Canadian Mennonites.

It is a member of the Association of Mennonite Brethren Churches of Ukraine.

The village was founded by Mennonites 150 years ago as Nikolaifeld. The original Mennonite presence continued until World War II, when the Mennonites fled with the retreating German army or were exiled as the Red Army retook the region from German occupation. 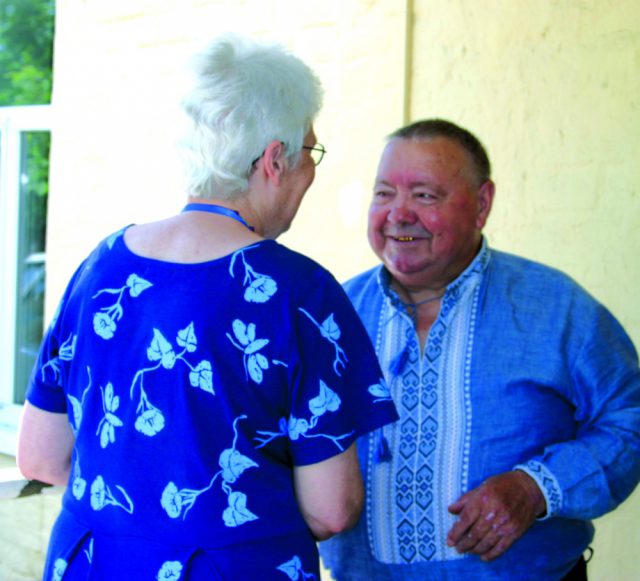 Today the congregation serves its neighbors by helping the elderly and running a summer day camp for children.

“We do what we can to bring the word of God to the village,” Kapelushniy said.

But he described the villagers as “cautious toward us.”

Raber explained: “The culture is Orthodox, so Mennonites and Baptists would be regarded with a certain amount of suspicion no matter what you do.”

Canadian visitors Peter Wolfe and Walter Thiessen, Mennonite Central Committee board members on a learning tour, spoke to the group. Wolfe told of his mother-in-law’s family being exiled from Ukraine to Tajikistan after World War II and eventually migrating to Canada in 1972.

He said the family arrived in Dushanbe, Tajikistan, with nothing. Without food, they searched on the ground for bits of grain.

When asked later how they kept their faith through such hard times, she said their faith was all they had left.

“They saw the hand of God with them,” Wolfe said. “Keep trusting in God. Jesus said in this world you will have trouble, but I have overcome the world.”