What's New
A FOCUS on Mission
Must Patience Be So Slow?
Harold Jantz: A Heart for the Mennonite Story
Lorlie Barkman: A Life of Creative Engagement
Last Days, First Days
Women in Ministry: Bertha Dyck
January Moment in Prayer “Holy Spirit—Fill Us!”
The Church as the Patient Body of Christ
Advent: Making Much of Jesus: Christmas Day
Advent: Making Much of Jesus: Fourth Advent
Home Life & Faith The great Mwenezi cook-off

All of Joseph Gudo’s hard work was summed up in one small plate of food. He’d laboured for months in the field and uncountable hours in the kitchen all in service to this dish—a neat pile of mashed cowpeas (or black-eyed peas), buoyed by a bold pinch of cayenne pepper and dressed up with pops of colourful diced tomatoes and green peppers. This was everything he’d been working for, his heart and soul on a plate.

That simple meal was the dish that won Gudo and his teammates the top prize in the very first Men Can Cook competition. It also cemented what he’d been learning all year—that cooking wasn’t solely a job for women. 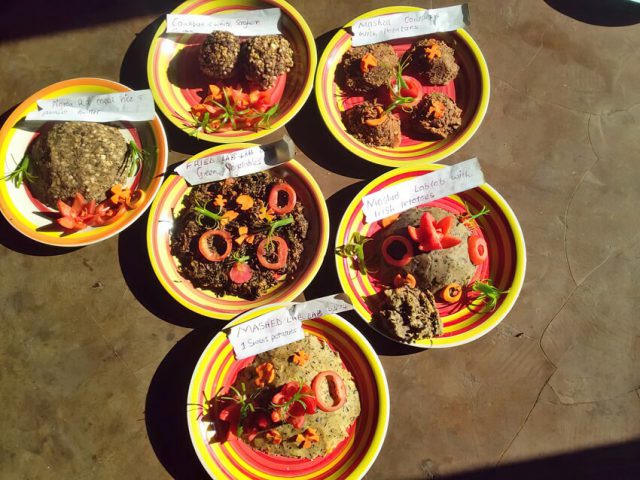 The final dishes from Jawanda Clemences team in the first Men Can Cook competition in 2018 in the village of Chinyause, Zimbabwe. The dishes include a variety of cowpeas, pigeon peas and lablab, prepared several different ways

Sexism in and beyond the kitchen

The belief that cooking is exclusively a woman’s role is not unique to Gudo’s home, the Mwenezi district of southern Zimbabwe. Many cultures have placed the burden of all domestic skills on women for thousands of years. But when staff at Score Against Poverty (SCORE), an MCC partner in the region, began a project to teach farming skills, they saw how this pervasive belief played out beyond the kitchen.

“We realized that there were gender power imbalances which were central to the food security situation within our communities,” says Caroline Pugeni, program coordinator for SCORE.

How does gender inequality affect food security? Since 2016, SCORE’s work has included securing plots of farmable land and teaching sustainable farming techniques to give families better access to food. But the rigid gender hierarchy caused disparities to surface. 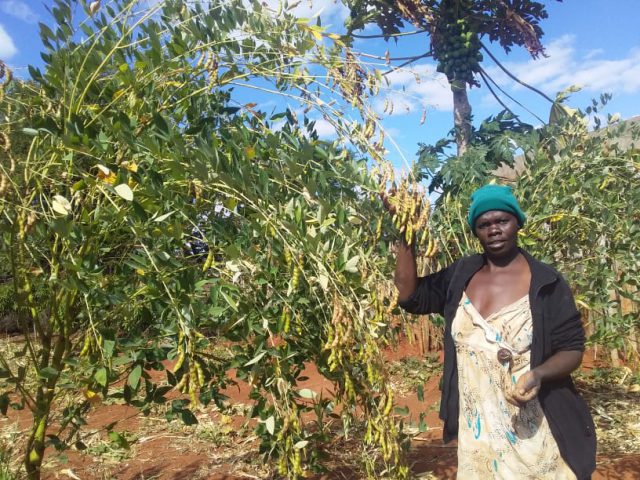 Kudzai Manavele shows off a pigeon pea plant that she successfully transplanted from another plant in the village of Chirimigwa, Zimbabwe. She learned the technique, called ratooning, from MCC partner Score Against Poverty.

“Crops were culturally defined between female crops and the male crops,” says Pugeni. The larger cereal and grain crops were grown by men while smaller crops including legumes, garden vegetables or cowpeas were managed by women. This also led to “male” crops taking up far more space than the other crops.

Pugeni and the other staff at SCORE saw these imbalances clearly but knew that changing them, or even trying to address them, would be a challenge to generations of male-dominated culture.

Through the funding support of MCC donors, SCORE held community meetings on gender equality—open discussions for neighbours to discuss these issues together. They saw some progress, though within a limited scope. Most men who participated struggled to identify any problem with a household where the husband had total authority over his wife. That was just the way things worked, they said.

But over a few sessions, SCORE’s was seeing glimpses of success.

“It began with thoughts like ‘Maybe there is need for me to assist my wife whenever my wife is not feeling well. It’s not right for me to make you cook if you’re sick,’” says Pugeni.

Seeing these ideas gain a foothold, Pugeni believed they could find success in framing the idea as a positive. Instead of correcting problematic behaviour, they could support positive change. Instead of centring the idea that it was bad to not help their wives, they focused on the idea that, yes, women have most often been the cooks of the family, but men can cook too. 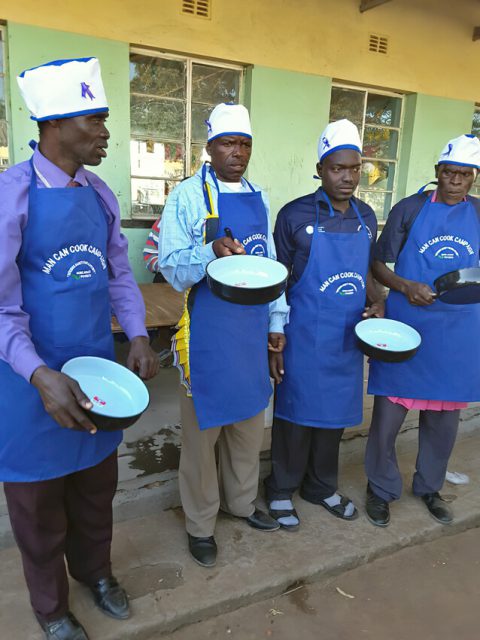 Members of the second-place team in the 2019 Men Can Cook competition pose with their prizesnew saut pans. The competition was started by MCC partner Score Against Poverty to break down gender barriers through co-operation in farming

Men can cook too

The rules of the competition were simple. Contestants were grouped into teams of five and would be required to grow, prepare and cook every single part of each meal they presented. The teams would be judged according to taste and presentation and the winners awarded prizes. Suddenly, some of the men were more interested in growing tomatoes and legumes despite them being “female” crops. But even that eagerness was quickly tempered by pride for some.

“It was easy for me to approach my wife for help with cooking, but what was difficult was for my wife to teach me during the day when everyone can see,” says Jawanda Clemence, a participant in the first competition. “So I opted to learn at night. My wife would teach me when kids had gone to bed. I was afraid of being shamed by other men in the village.”

Clemence says most of the crowd that gathered to watch that first year came because the idea of men competing to cook was too bizarre to pass up seeing in person. He thought very little of the idea when he agreed to try it.

“I wanted to laugh at my friends that were really showing an eagerness to participate,” says Clemence. “In my family, no man cooks. You marry for your wife to cook for you. What SCORE was talking about was just beyond my imagination.”

And Clemence wasn’t the only one suspicious of the idea. Encouraging men to be more involved at home seemed like a good plan, but many women worried that the kitchen could just become a new place for men to wield their total authority.

Instead of a new arena for oppression, the women of Mwenezi started to see changes they wouldn’t have thought possible, says Gaudencia Pugeni, a participant in SCORE’s agriculture program (no relation to Caroline Pugeni).

“Men started to share financial matters with their wives and many husbands no longer beat their wives,” she says. “There is a love now that wasn’t there before.”

And these changes weren’t just showing up at home. Out on the fields, male farmers shared the land more equitably, included the women more in planning and began planting legumes and other previously dismissed crops themselves.

“It has given farmers an opportunity to know and address underlying issues that affect food security here,” says Caroline Pugeni. “It has improved food and nutrition security at a household level.”

The first competition took place in 2018 with eight men’s teams and six women’s teams comprised mostly of competitors’ wives. Men’s teams took the top three spots that year. Gudo’s team emerged victoriously, his mashed cowpeas named the supreme dish. And their prize? Aprons and a variety of pots, pans and cooking utensils to call their own. For placing third, Clemence was awarded a teapot that he now displays proudly at home.

Both Gudo and Clemence say connecting with their wives through the whole process changed their perspectives drastically. They see themselves more as equal partners and not as a master over their spouse. 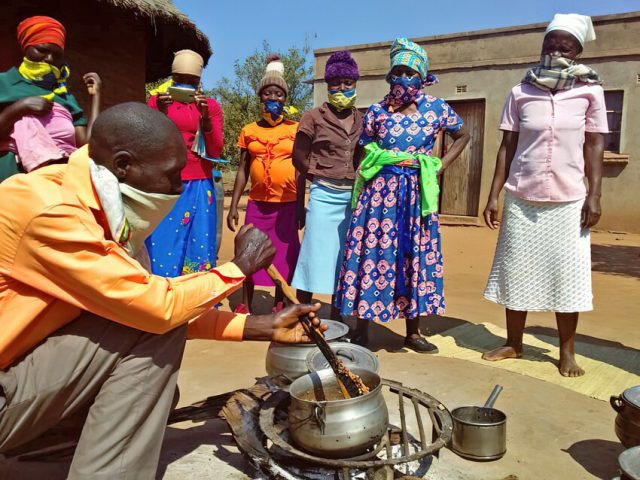 After entering the Men Can Cook competition, Jawanda Clemence discovered a love of cooking. Now he helps train new competitors and has developed a number of his own recipes. Here hes teaching a recipe for mashed lablab to a group of women. At the time this photo was taken, COVID-19 measures in Zimbabwe only included a recommendation for mask use

Clemence changed his tune on cooking entirely. He now teaches men practicing for the competition and has developed his own signature recipe for a nutritious porridge that he shares with anyone who’s interested.

And Gudo started offering to cook, to help in the garden and to walk his daughter to school, insisting his wife take time to rest. He says he wants to show his kids what he only learned as an adult.

“It shows our kids to learn to love one another. Because there was a great gulf existing between boys and girls when the boys saw themselves to be superior as the culture says. But now, it gives all both boys and girls they know that we are all human beings. We are all the same.”

Score Against Poverty has recently published a collection of recipes featured in the Men Can Cook competition.

Jason Dueck is a communications generalist from Winnipeg, Manitoba.

A garden of giving