What's New
Leading through the trauma of covid: Part two...
Ask God which town
Where to from here?
CCMBC National Director attends 2022 ICOMB Summit
MCC Canada and MCC Manitoba sell shared property...
The world appears to be growing darker
Sharing a new and unified language
6 reasons to attend the MWC Global Assembly...
One too many
Just one more
Home News When women’s rights and climate change intersect

Ana Iris Constante says she used to be nervous just to introduce herself.

She would never have guessed that one day, she would be part of a group of women that makes regular trips to the mayor’s office with petitions in hand – a group of women who insist on having a voice. Although they are often met with rejection, they no longer fear it.

“We have learned that they will say no, but we can keep going,” said Constante. “And we don’t have to stop just because someone says no.”

Constante, who lives in Los Montes, El Salvador, is one of more than 300 female political advocates in her municipality of Cuisnahuat. Asociación Nuevo Amanecer de El Salvador (ANADES; New Dawn Association of El Salvador) has supported and trained them to speak up through its partnership with Mennonite Central Committee (MCC). 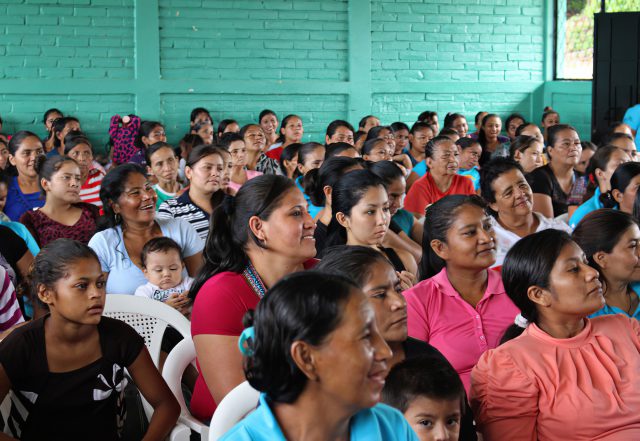 For the past few years, the women have been pressuring their local governments to address climate change ‒ a global crisis that threatens their food security.

“A cruel irony about climate change is that the communities most harmed by its effects are the least responsible for its origin – and the least able to respond and adapt,” wrote Tammy Alexander, senior legislative assistant at the MCC U.S. Washington Office, in the 2019 fall/winter edition of Washington Memo.

“The United States, as the largest historical emitter of the greenhouse gases that cause climate change, bears a great responsibility not only for reducing our own emissions but also for helping those affected.”

Women are among those most affected in El Salvador.

“Women are the ones who carry the commitment for the family ‒ take care of the family and try to get food for everyone,” said Zacarías Bernabé Martínez, who works with ANADES as the coordinator for its community development program. When resources like food and water become scarce, he said, women take on the additional burden.

Climate change is taking its toll across El Salvador. Constante said that the rivers are drying up and no longer yield the same amount of fish, crawfish, and crabs that women once collected to feed their families.

Constante’s fellow advocate, Rosa Estefanía Carillas from the village of Palmarcito in the Cuisnahuat municipality, added that lack of rain makes it hard for women to grow gardens to feed their families.

People are experiencing shortages from municipal water sources too, as droughts worsen, and large companies try to privatize precious water for their own benefit. For women, who are often tasked with providing water for their families, this can mean time-consuming walks to available water sources or waiting in long lines at municipal faucets.

To Constante and Carillas, who see these problems first-hand every day, these observations are more than grim realities ‒ they’re also valuable data. They know these facts will strengthen their arguments the next time they petition their municipal government. 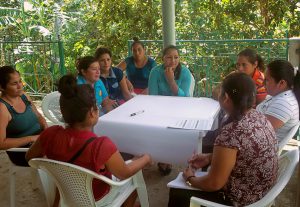 A representative of a women’s advocacy group listens to the concerns of other women in her village. She will relay those concerns to representatives from other villages. Together they’ll decide what issues to take to the mayor. PHOTO: courtesy of ANADES

Constante and Carillas both serve as representatives of the women’s advocacy groups in their villages. They meet with these groups, which have between 25 and 45 women, to gather concerns at the village level. Then they meet with representatives from Cuisnahuat’s other village communities ‒ 10 in total ‒ to decide on the region’s most pressing issues to bring to the mayor.

Next, the representatives travel to the mayor’s office. They request his presence at an assembly of all the women advocates in Cuisnahuat, so he can give an answer to their petition and discuss any questions.

“That process is challenging because there are often times when the mayor will say no or won’t show up or will complain about the meeting space,” said Carillas. “Often it requires follow-up to go again and again when they don’t show up to the assembly.”

The women have to deal not only with reluctance to listen, but also lack of training in public administration on the part of officials. “Despite the fact that they probably don’t have as much formal education as mayors, the women are much more educated about rights, about government processes than the mayors are,” said Martínez. 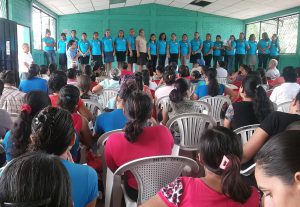 Although pressuring the government is a slow process that requires constant repetition and follow-up, several years ago the women scored a major victory by establishing a municipal office dedicated to women’s issues. The office pushed for public health institutions to focus more on women’s health, especially with the health risks posed by climate change. It also provided agriculture and nutrition training designed to help women cope with the changing climate.

However, Martínez says, elections in El Salvador tend to bring about dramatic change. In a blow to the advocates’ years of effort, the most recent mayor of Cuisnahuat defunded the women’s municipal office when he took charge. “They [the advocates] learned that you have to fight really hard to get a success, and then you have to fight sometimes even harder to keep it,” Martínez said.

But the advocates have built resilience over the years, and they continue to push for the betterment of El Salvador’s women and the populace as a whole.

In Cuisnahuat, they are currently pressuring the municipality to close a garbage dump serving the entire western half of El Salvador that is posing environmental and health risks.

They also are trying to pass legislation to make water a freely accessible human right rather than a privatized resource. Additionally, they want the government to provide agricultural and other programs that help women adapt to the changing climate.

When Constante thinks about her hopes for the future, she thinks of her three daughters, who are 15, 11, and five years old. “I want to make sure that all I’m learning, whether in civic participation or in agroecology, I’m passing it on to them,” she said. “Because I’d love for them to be empowered to have a vision for their life in the future, so we can fight for them in that vision.”

Constante also hopes that her daughters will be able to enjoy and care for the earth. She recently helped her youngest daughter grow a yucca plant with organic fertilizer. Her daughter was delighted to see the yucca plant sprout, grow, and produce. “Look, Mommy, look!” she would exclaim, showing Constante her flourishing plant.

This is exactly what Constante wants for the next generation of Salvadoran women. “We want our daughters to take joy in creation, and all the benefits it provides and produces when we treat it as we’re supposed to,” she said.

is a freelance writer, based in Millersville, Pennsylvania. This article first appeared at MCCCanada.ca.

You will find this interesting as additional information in response to and referring to “… “The United States, as the largest historical emitter of the greenhouse gases that cause climate change, bears a great responsibility not only for reducing our own emissions but also for helping those affected.”
See: https://en.wikipedia.org/wiki/Top_contributors_to_greenhouse_gas_emissions

Rudy, the link you’ve added is industrial not national contributors to greenhouse gases. You can read the document from which Tammy Alexander is quoted here to get a background on where she is getting her figures.
https://washingtonmemo.files.wordpress.com/2019/08/wm_2019_fall-winter.pdf

I am certainly sympathetic and in favor of these Salvadoran women and their plight to advance better living standards for their families.
However, this article is typical of MCC political commentary and UN propaganda bandwagon jumping. Not only is the USA not the largest “Climate Warming” contributor, but there is also no long term “Climate Change.” If they would do some serious research, they would find out at least two important things: 1)There are thousands of scientists that disagree with the (so-called) evidence of Climate Warming/change. These are the scientists who are not getting the major funding from global governments for tax collecting purposes ($trillions) and are therefore ignored by various government and mainstream media. 2) Since 1900 there are dozens of examples where the same government-subsidized science ‘communities’ have been predicting death and destruction due to everything from global warming, floods, oxygen deprivation, hail storms, crop failures, and at least three ‘ice age’ threats – the latest being in the late 1970s.

Without this propaganda subsidy, these changing events would be called “weather patterns” ….some are short term, some are long term….1930s droughts, 1950s extremely colder than normal. (In the 1920s there were farmers in the Canadian prairies cultivating their cropland in late January. etc; etc.) Don’t be manipulated by non-elected (and now the elected) overpaid bureaucrats who are willing to compromise true science in order to keep the $ flowing in their direction.

Dick, I’d encourage you to spend some time watching Katharine Hayhoe’s Global Weirding videos. She’s a climate scientist and an evangelical Christian who has a very accessible way of relating technical information to the practical questions lay people have.
https://www.youtube.com/channel/UCi6RkdaEqgRVKi3AzidF4ow