What's New
A FOCUS on Mission
Must Patience Be So Slow?
Harold Jantz: A Heart for the Mennonite Story
Lorlie Barkman: A Life of Creative Engagement
Last Days, First Days
Women in Ministry: Bertha Dyck
January Moment in Prayer “Holy Spirit—Fill Us!”
The Church as the Patient Body of Christ
Advent: Making Much of Jesus: Christmas Day
Advent: Making Much of Jesus: Fourth Advent
Home News Love for God; desire to teach 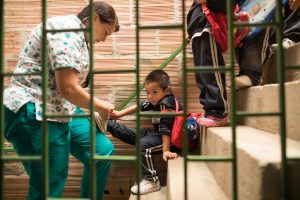 Sandra Luna assists Jimmi Bedoya, 3, at Centro de Capacitacin del Nio (Children’s Training Center) in El Progreso, Soacha, outside Bogot, Colombia, where Luna teaches grade one and acts as one of the coordinators of the school.

I was born in Santander in north-central Colombia. My husband and I married when he was 17 and I was 15, and we decided to come to Bogotá to look for a better life.

My husband works in construction, and eventually we got a lot here in El Progreso (a marginalized neighbourhood) through a friend from his work.

In about 2005, the Mennonite Brethren church here, Iglesia Cristiana Hermanos Menonitas El Progreso, had an evangelism campaign, and my husband went.

As I got to know the pastor, David Bonilla, and his wife, Marina Forero, they started asking me to teach in the church’s preschool. 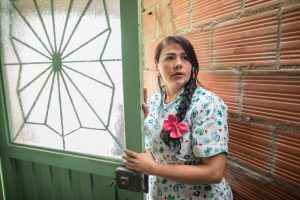 Sandra Luna teaches grade one at Centro de Capacitación del Niño (Children’s Training Center) in El Progreso, Soacha, outside Bogotá, Colombia, where Luna acts as one of the coordinators of the school.

I said no. At that time, I had a small business making and selling cookies. Also, I was scared of working with children; 15 children in a classroom was way too many. And my twin girls were just six months old at the time.

They kept inviting us to come eat lunch and they’d ask again.

Eventually, classes were about to start, someone had left and they needed a temporary teacher to fill in.

I think it was God who helped me to feel I could say yes.

At first, I didn’t know how to work with the children. It really stressed me out. A lot of parents knew me and knew I sold cookies and were saying, “How is this woman selling cookies now in charge of a classroom?”

It was very difficult. But God knows how to walk with us.

That formed me, that experience. I kept on working, and David still didn’t find a replacement. So I stayed.

There are a lot of displaced people in this community. It’s really been a blessing for them to have a church as a support system and a place for their children to go to school.

I had a difficult childhood. My father drank a lot, and my mother suffered. We also suffered, too, as children. For me to be able to show other children this love that I didn’t receive fills me up. 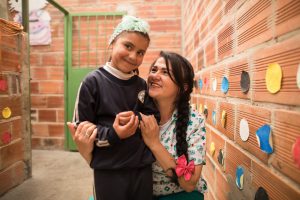 Sandra Luna teaches a grade one class including student Sharol Osuna Salinas, 7, at Centro de Capacitacin del Nio (Children’s Training Center) in El Progreso, Soacha, outside Bogot, Colombia, where Luna acts as one of the coordinators of the school.

That first year, along with another teacher, Sandra Granados, I was receiving a lot of tools to be able to work with the children.

We were learning not just how to teach but how to teach the different ages and according to grade, how to manage discipline, how to work at the theme of peace in the school environment. We learned more about the administrative and accounting work.

As we went along, David and Marina started to give up different responsibilities to us.

They had this trust in me. They were believing in me even when I didn’t ever believe in myself. I was surprised. It was a time of, “Can I or can’t I?” I did feel more capable of doing these tasks, so little by little I took on more.

I started teaching in 2009, then in 2012 David and Marina had to leave really abruptly because of threats to their security from armed groups in the area.

That left the other Sandra and me in charge of the school, and we also took on leadership roles in the church. It was really hard with them leaving.

We were still in the midst of this process of learning. We had the theoretical knowledge, but we had to really delve into the practical details.

But we never thought about stopping the activities. It’s really the children who are benefiting from this. The next day, we came in and worked.

When I started, all my tasks were here inside the school. Now, I’m the one to go out and visit families, and parents come and talk to me about their concerns.

In this context, like any other, there’s violence, drug trafficking, gangs. But more than anything, in this context, there are people who dream and people who struggle to continue forward. These are the people we bet on for the future.

I’m really happy. I am what I am because God decided. I give thanks to God every day for this opportunity. 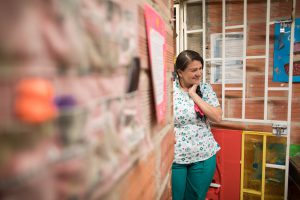 Sandra Luna teaches grade one at Centro de Capacitacin del Nio (Children’s Training Center) in El Progreso, Soacha, outside Bogot, Colombia, where Luna acts as one of the coordinators of the school.

I haven’t gotten here by myself. There have been many, many hands that helped. I’ve seen God reflected in many people who have helped me along the way. My family has supported me. And God has been there and opened up different spaces and encouraged me and challenged me.

I had dropped out of school early, but now I’m in the last year of working on my high school diploma. I want to go on to study education and children’s psychology at the university level.

My prayer is for the people along with me on this journey – for my family, for the other people being discipled through my leadership, that they have this love to serve and to give.

Marla Pierson Lester is the publications coordinator for MCC U.S. Mennonite Central Committee: Relief, development and peace in the name of Christ