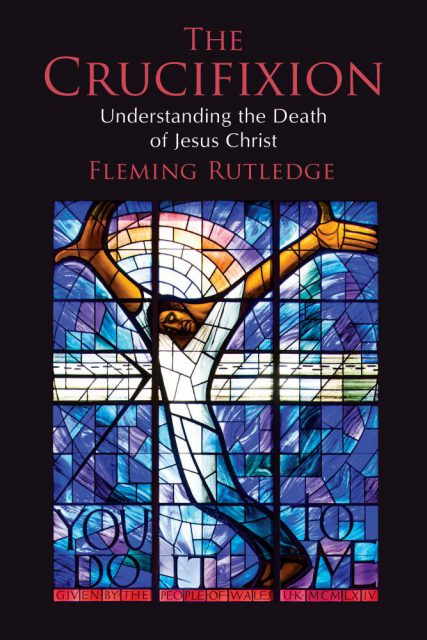 The artwork by John Petts that graces the cover caused reviewer Mark Friesen to ponder the book’s insights on the crucifixion. “It was presented as a gift from the people of Wales to the baptist church in Birmingham, Alabama, as a response to the Klu Klux Klan bombing of the church that had killed four young girls.”

In this monumental work, the author attempts the first “major study of the crucifixion specifically for pastors and lay students since John Stott’s The Cross of Christ published in 1986.”

Fleming Rutledge is an Anglican priest, and theologian. She is known for her evangelical preaching as well as being a teacher of preachers. A Canadian connection is that in 2008 she was scholar in residence at Wycliffe College, the evangelical Anglican Seminary at the University of Toronto. She is clearly well versed in three sources: Christian Scripture, Christian scholars (both ancient and modern), and current Western culture and thought. She is able weave all three sources in a rich and nuanced style.

The author demonstrates a commitment to the Bible and classical Christianity. In addition, she is committed to the social justice implications of the gospel. As such she seems in line with the MB synergy of both evangelical and Anabaptist principles.

Her one point of divergence from our Confession of Faith would be when she attempts to use Paul’s vision of God’s sovereignty in salvation (e.g. Romans 11) to hint at universalism. However, she wisely does not press her point too strongly in her final words on the subject: “We must approach these passages of Paul with restraint. Whether this is universal salvation or not, we are unable to say – though we are permitted to hope. What is certain is that there will be a conclusive judgement upon Satan and all his works, and a definitive and final separation of good from evil in the City of God.”

In the first part of the book, Rutledge explores important (yet often neglected) themes in understanding Christ’s crucifixion: sin (as both responsible guilt and alien power), God’s justice, the dehumanizing intent of Roman crucifixion, and the centrality of the cross for the gospel.

In the second part, she explores the biblical/historical imagery (or “motifs”) for Christ’s death roughly divided into two broad categories God’s atonement for sin, and God’s victory over the Powers of Sin and Death. She does all this in a way that is both grounded in the historic faith and contemporary at the same time.

This is not an easy book to read… Its length (612 pages) and density (footnotes on every page) requires diligent attention for the reader to absorb its message. In addition, the author’s willingness to unflinchingly examine our collective entanglement with the evil of this world does not make for comfortable reading. But on both counts the benefits are well worth the effort.

Until recently, evangelicals have often acted as if one theory of the atonement (penal substitution) was the only orthodox view of Christ’s work on the cross. In reaction against this position, some now jettison anything associated with this view: Anselm, Calvin, the wrath/justice of God. Rutledge makes the case for a reconsideration of all these things. In doing so, she argues that what we need today is to embrace all the biblical and historic Christian ways of understanding the crucifixion to restore the fullness of the gospel. We would do well to listen to her case.

Recommended by a wide spectrum of Christian sources including: Christianity Today (2017 book of the year award)
https://www.christianitytoday.com/ct/2017/january-february/christianity-todays-2017-book-of-year.html

Who should read this book?

I agree with the author’s answer to this question: “The book is perhaps most particularly directed to busy pastors who are burdened with duties yet serious about preaching the gospel and seeking help for their sermons. It is also for inquiring laypeople who want to understand their faith better… Most, of all it should speak to the reader who is drawn to the figure on the cross but does not quite know what to make of him.”

Until the gospel of Jesus Christ burst upon the Mediterranean world, no one in the history of human imagination had conceived of such a thing as the worship of a crucified man. The early Christian preaching announced the entrance of God upon the stage of history in the person of an itinerant Jewish teacher who had been ingloriously pinned up alongside two of society’s castoffs to die horribly, rejected and condemned by religious and secular authorities alike, discarded onto the garbage heap of humanity, scornfully forsaken by both elites and common folk, leaving behind only a discredited, demoralized handful of scruffy disciples who had no status whatsoever in the eyes of anyone. The peculiarity of this beginning for a world-transforming faith is not sufficiently acknowledged.

The all-important connection between the method used to execute Jesus and the meaning of his death cannot be grasped unless we plumb the depths by what is meant by injustice. There is much irony here, for injustice is a threatening subject for the ruling classes who have the time and inclination for reading books like this one. …The “justice connection” may not be clear to those who are accustomed to privilege, but to the oppressed and suffering Christians in the troubled places of the earth, there is no need to spell it out. God in Christ on the cross has become one with those who are despised and outcast in the world. No other method of execution that the world has ever known could have established this so conclusively.

In the final analysis, the crucifixion of Christ for the sin of the world reveals that it is not only the victims of oppression and injustice who are in need of God’s deliverance but also the victimizers. Each of us is capable of, under circumstances, or being a victimizer… To understand the radicality of the gospel, it is necessary to realize that God is on the side of the defenseless, whoever they are. If a victorious revolutionary turns on the oppressor, then the former oppressor has suddenly become the defenseless one toward whom God declares his partisanship.

The Anabaptist tradition, consistently the most pacifist tradition in the history of the Christian church, has traditionally had no hesitation about speaking of God’s wrath and judgement – and with good reason. There is no trace of an nonindignant God in the biblical text, be it Old Testament or New Testament, be it from Jesus of Nazareth or from John of Patmos… It would be impossible to pursue a course of nonviolence in the face of great evil if one did not believe that God would judge justly in the long run.

[Mark Friesen is a member of The Meeting Place, Winnipeg.