What's New
A FOCUS on Mission
Must Patience Be So Slow?
Harold Jantz: A Heart for the Mennonite Story
Lorlie Barkman: A Life of Creative Engagement
Last Days, First Days
Women in Ministry: Bertha Dyck
January Moment in Prayer “Holy Spirit—Fill Us!”
The Church as the Patient Body of Christ
Advent: Making Much of Jesus: Christmas Day
Advent: Making Much of Jesus: Fourth Advent
Home News Youth EMBRACE risk on mission 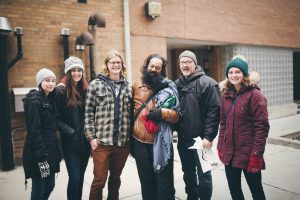 The most memorable part of MB Mission’s EMBRACE retreat (Jan. 20–22, 2017) for Alysha Frey was when her team prayed for open doors to share the gospel (based on Colossians 4:3) and “we saw God work through conversations with strangers in ways that we could not take credit for.”

The first four annual EMBRACE retreats featured global missionaries teaching at Camp Crossroads, but “this year, we were in the city with Kingdom leaders on their turf,” says MB Mission mobilizer Philip Serez.

While “home base” for training sessions was Riverside Evangelical Missionary Church, Toronto, five electives got young adults out of the church and – guided by representative from local MB and inter-Mennonite ministries – interacting with people in First Nations, Hindu and Sikh, Muslim, refugee and urban poor communities.

The Word on the street 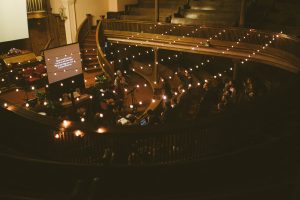 Beth Gould, a student who volunteers at a food bank, chose the Kingdom elective on Homelessness, Urban Poverty and Spiritual Journey with Pete Olsen from MCC TOOLS (Toronto Ontario Opportunity for Learning and Serving).

At first, Gould was uncomfortable talking to people who live on the street, but she discovered “they’re just like me, only in a different situation.” She was impressed by one man who had a rough life but found things to be happy about.

“He was sharing with us the joy God placed in his heart,” says Gould. “This changed me.”

The experience “made me a more confident person and deepened my compassion,” says Gould. “It helped me understand more of God’s character, how he loves everyone.”

Getting the ball rolling 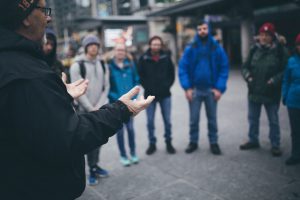 Frey, a junior youth ministry sponsor at Waterloo (Ont.) MB Church, signed up for the Muslim Ministry elective led by The Jesus Network. “With so many refugees coming to Canada, I wanted to learn how I could meet them where they were at and introduce them to Jesus.”

“Most of the weekend, I lived completely out of my comfort zone,” she says. Her team elected her as their leader – a role for which she did not feel equipped.

“But,” says Frey, “the less I felt in control, the more God showed me that he was, and that I needed to trust and follow what he was already doing.”

“We were not just studying Muslim ministry in a classroom; we had the opportunity to pray and then go to the people.” She and her friends joined two boys playing soccer.

They conversed as they played; the boys answered some of Frey’s questions about Islam. “By the end of our soccer game, we had explained the gospel to them,” says Frey. “It was bold, but it wasn’t forced.”

Since EMBRACE, Frey has started learning Turkish as she discerns her call to ministry in a Muslim community.

“EMBRACE was a great reminder that when we say, ‘Here am I! Send me!’ God doesn’t expect us to have it all together first.”