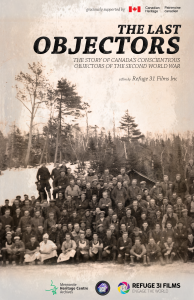 “The [Mennonite Heritage Centre] archives wanted to capture the spirit of conscientious objectors on camera: their emotions, faces, words,” says Andrew Wall of Refuge 31 Films, “and I wanted to do a documentary. So we pitched a two-part project”: a recording of the full interviews and the edited 44-minute film The Last Objectors.

After a year and a half of paperwork and questions, Wall and Conrad Stoesz, archivist at MHC and the Centre for MB Studies, received a letter stating that Heritage Canada, through the World Wars Commemoration Fund, approved their request for $36,000.

Since October 2015, Wall has interviewed more than 15 COs from Ontario to B.C. During WWII, these men did everything from working in mental hospitals to building roads. A few are Hutterite and United Church members; most are Mennonites.

“It’s wonderful to meet these people who made a decision so long ago that’s so relevant today,” says Wall.

Part of our history

“WWII vet stories have been told and meticulously documented; COs, not so much,” says Wall. The fact that his ancestors were war heroes doesn’t cause him any cognitive dissonance in featuring COs. Many vets and COs “are genuine individuals making decisions based on their faith,” he says, “and we need to recognize both sides.”

Unlike other documentaries that ask, “Was alternative service a moral choice?” The Last Objectors starts from the perspective that “it’s a human right to make that decision,” says Wall, “and here are the stories of people who did.”

“Since 1793, conscientious objection has been part of Canadian tradition and identity,” says Stoesz. “People from 33 ethnic background and 24 faith communities performed alternative service in WWII.”

Some interviewers were highly personal: about how CO service affected them and their families. Other segments contained deep theological reflection.

During the 2015 federal election, Stoesz received an angry letter stating that Mennonites should not be allowed to hold office, vote or even enter Canada because of their views on non-resistance.

But the reaction to the documentary has been “overwhelmingly positive,” says Wall, whose work sometimes puts him in contact with military personnel. They have told him, “It’s an important story to tell.” Bruce Tascona of the WWI Museum in Pilot Mound, Man., points out that COs working in Canadian hospitals took good care of many returning veterans, and that positive memory stuck.

CBC Manitoba liked Wall and Stoesz’s idea, but before “the mother ship in Toronto” could approve the broadcast, they needed to see a demo: Wall created one overnight.

MTS Stories From Home is the primary broadcaster. A dozen organizations have already asked to screen The Last Objectors, beginning in mid-June in southern Ontario.

Before it’s too late

“Part of the story is that COs are disappearing,” says Wall.

Some critics thought it was too late, but Wall and Stoesz proved them wrong: many COs were capable of remembering, and happy to share, their stories.

Many COs Wall interviewed were in their 90s. He was careful to respect their energy level; in some cases, he had to fit all his questions into 10–15 minutes. One gentleman talked for an hour and 20 minutes. “I was so afraid we’d exhaust him,” says Wall. “[When the interview ended,] “he said he would jump on the exercise bike!”

“The sad part,” says Wall, “is that two interviewees, David Schroeder and Ted Friesen, have already passed away since we filmed them.”

“I want viewers to feel like they’ve met a CO and understand the journey they took: from the first letters in 1942, to 1946 when the final COs went home,” says Wall.

“These are voices we need to remember.”

Is there another site where The Last Objectors could be viewed.
I tuned in to the Aug 27 program only half way through and would really like to view it again with my dad , as he too was a CO in WW II