What's New
Leading through the trauma of covid: Part two...
Ask God which town
Where to from here?
CCMBC National Director attends 2022 ICOMB Summit
MCC Canada and MCC Manitoba sell shared property...
The world appears to be growing darker
Sharing a new and unified language
6 reasons to attend the MWC Global Assembly...
One too many
Just one more
Home Arts & Culture What would it take? 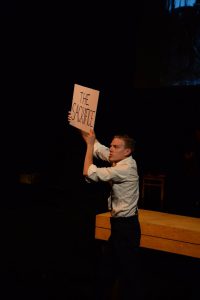 Mennonites are a people of living out discipleship in the grind of daily life. I was introduced to some our spiritual ancestors and the challenges and risks of their discipleship in Canada in the 1940s through the Saskatoon performance of Yellow Bellies on October 18, 2017. Yellow Bellies, produced by Theatre of the Beat, tells the story of Mennonite Conscientious Objectors in World War II.

As someone who holds to the nonviolence of the Anabaptist faith, but was not alive during the world wars, I was interested to learn about the history of COs, from the difficulty of pleading a pacifist position before a judge, to being sent away from home and family to work in alternative service, to the persecution experienced for not fighting “for king and country,” to the quiet arrival back home. There were some COs and their family members in the audience, which brought the history from the stage to our reality.

The play caused me not only to think about Mennonite history, but also about Anabaptist theology. Rudy, the main character of Yellow Bellies and a Mennonite CO, reflecting on his decision to participate in alternative service rather than fight overseas, said: “All of a sudden, our peace stance meant something.” 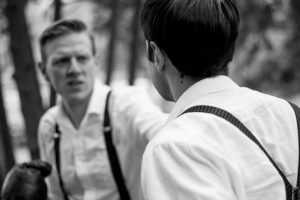 When faced with the reality of war and conscription, all of a sudden, the Anabaptist peace stance meant something because it was contested and laid bare. There was no longer the option of quietly holding to a nonviolent position without raising a fuss. Rather, nonviolence now meant standing apart from the crowd, enduring mockery, articulating convictions, and, at its core, following after Christ as a disciple, no matter what the world said, thought or did.

All of this caused me to reflect on what our peace position means today. As a middle-class, white, North American Anabaptist, I am rarely confronted with the reality of violence. If I am confronted with the reality of violence, it is often through the mediation of a screen. So, Yellow Bellies left me with this question: “what would it take for my peace position to mean something?”

Sure, it’s easy for me to say I’m nonviolent, perhaps as it was easy for our spiritual ancestors to say they were nonviolent until they were confronted with the realities of war and conscription. When our beliefs are challenged, and we are forced to act, our convictions (or lack thereof) surface. In the face of war, peace means saying no, standing apart from the crowd, following Christ though none go with us.

But back to my question:

“What would it take for my peace position to mean something?”

There are two aspects to this question.

First, how will I react to the violence I see, even if it is only through a screen? How will I work for peace in a world where there is none, a world of Syrias and South Sudans?

The second aspect of this question is perhaps more subtle, yet just as urgent. How will my peace position mean something in a North American culture where it is my “right” to be nonviolent, even somewhat “cool” to advocate for peace? How can my peace position stand out as a discipleship commitment rather than a merely a political or ideological position?

I hope you will join me in this pondering.

[Stephanie Christianson lives in Saskatoon with her husband Austin. They serve with Ranger Lake Bible Camp.

I appreciate this article Stephanie. Lorne & I just spent some time in Japan which included a day at Hiroshima. I have read the book “ Sadako” by Eleanor Coerr about the the young girl who makes the peace cranes with our grandchildren and that has brought about many discussions about war and peace. How can we let the A bomb happen again! Do we have enough patience with God?